Imitating an old joke on Facebook, Instagram users from 15 to 30 years have found a new way to gain popularity - “die”. In the English-speaking Internet, this phenomenon is known as RIP'ing (Rest in Peace means “Rest in Peace”). 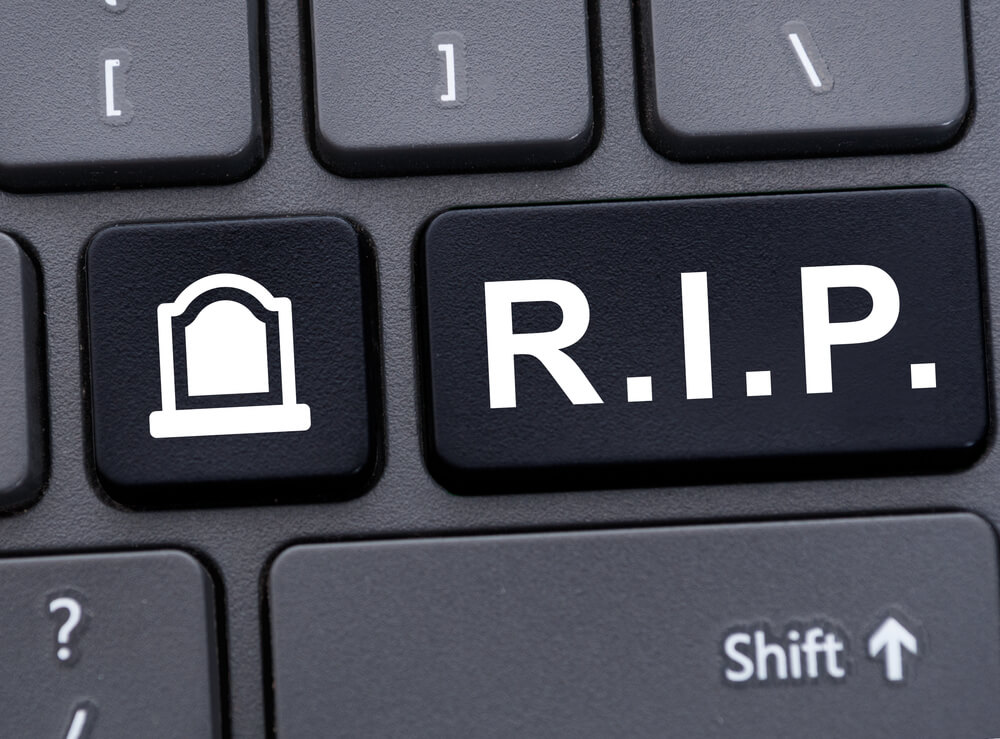 It appeared at the beginning of 2010's and is associated with a Facebook draw, when someone writes condolences on the wall of a live user. As stated in the Urban Dictionary, an Internet slang dictionary, it is ethical to use a rally for everyone, “with the exception of children and soldiers in the service abroad,” Tjournal.ru.

“Rest in peace, we will miss you,” “Rest in peace, mate,” “You died too young,” “I can't believe that you are no more,” more recently in the comments under a photo on 15 Instagram -year-old American Ahmed Simrin meets thousands of similar condolences. 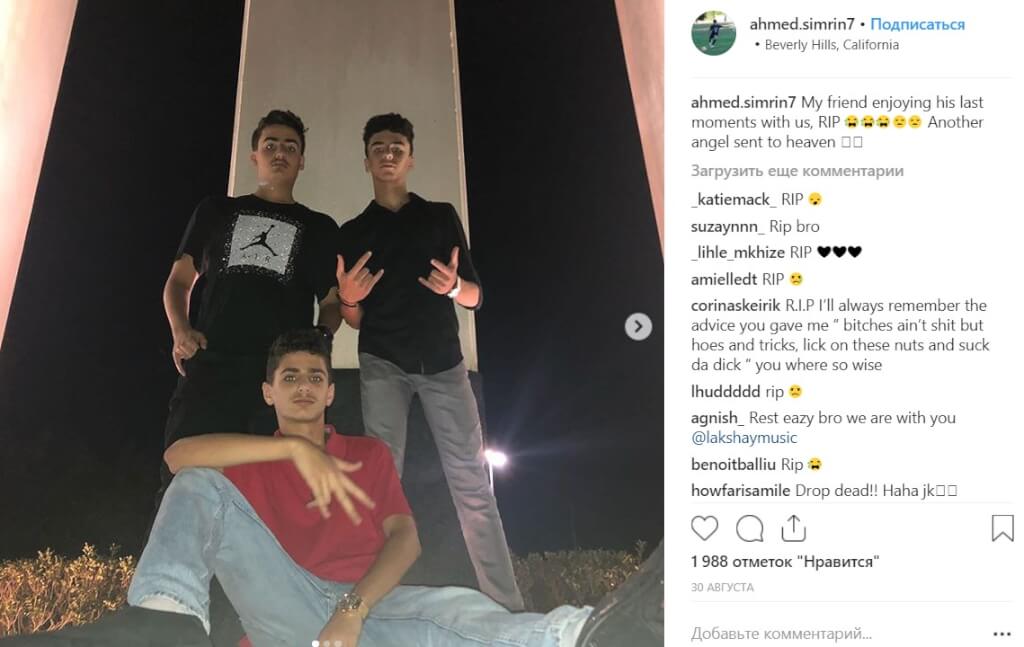 There are only five photos in the profile of the young man, on one of which (more than four thousand likes) he simply poses with a friend.

In total, more than 30 have commented on thousands of people in a little-known profile - 99% of them said goodbye to Simrin or expressed condolences to his family in connection with the death of a teenager. However, as the young man Engadget said, he only decided to play the Internet.

“Hi guys, you couldn’t write in the comments under my latest photos“ Rest in Peace ”(RIP), because I want my girlfriend to decide that I am dead, my family has moved and she wants to continue dating, I am not, because it was a pretty toxic relationship. ” 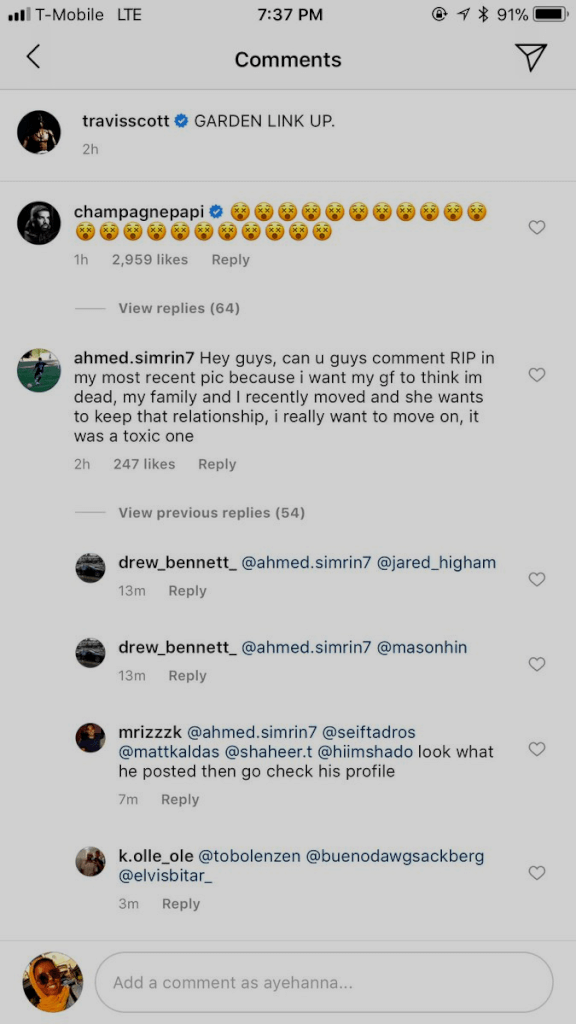 This is the original text, with which Simrin convinced people to arrange a “funeral” for him.

For an extra effect, the youth left a comment in celebrity profiles, including rapper Travis Scott (more than 12 million subscribers). As Symrin says, Instagram has deleted one of the photos in his 10 profile with thousands of comments, because it violated the community’s “about violence or threat of violence” leadership. No more sanctions from the social network did not follow. Its representatives do not comment on the rally.

Simrin showed reporters a screenshot of the statistics, which states that from 24 to 30 in August, thousands of users visited his account. New comments appear so far, but not in such quantity. “This idea suddenly appeared in my head. I decided to try it, because why not do something new for fun. At the present time, people will do everything to achieve fame, ”says the young man. He stressed that he had never heard of such rallies before.

Unexpectedly for Simrin, his idea has become a trend. Under one of the pictures in Kim Kardashian’s profile, the user “benittoferretto” wrote the same message as Simrin. As a result - three photos in his profile have more than two thousand likes, and the number of messages under them has exceeded ten thousand.

The user “riccardomancaa” addressed people in the comments in the profile of the popular (more than seven million subscribers) Sneakernews online publication about sneakers. “Could you all write“ Rest in Peace ”under my latest photos, so that people would think that I was dead and I could not go to school,” wrote the young man. 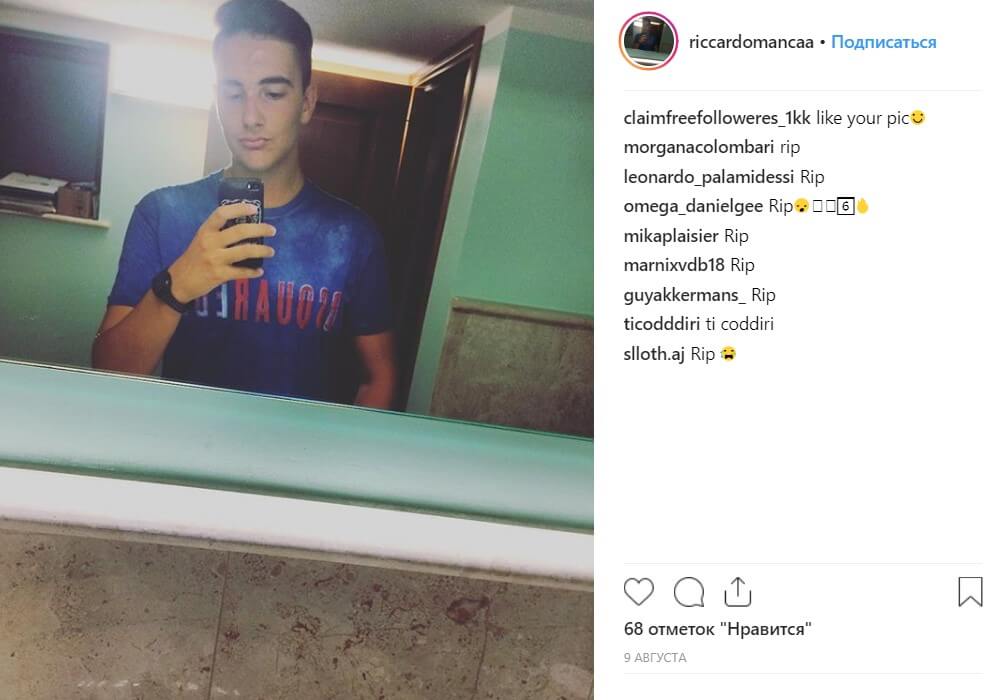 The activity on his page is much lower than in the two previous cases, and among the responses to a comment there are requests to “stop” or advice not to skip school.

15-year-old Simrin admits that he revived the old trend, which was last discussed in 2014 year. Then a few people serially commented on the photos in the profile of actress Cameron Giving the message “Rest in Peace”. The actress replied that such behavior was unacceptable: "It is impossible to disrespect death or the loss of a loved one."

Among those who tried to repeat the success of Simrin, not only peers, but also people older than 20 and 30 years. They refused to communicate with journalists because of fears that their actions would be criticized.

Professor and psychologist at the USC Annenberg School of Communication and Journalism Karen North believes that the authors of such rallies do not understand that they can upset or scare someone, because for them it is a “game”. A social network researcher at Stanford University, Jeff Hancock, believes that this trend is due to the usual "weirdness in human psychology." According to the expert, attempts to pretend to be dead in social networks are a somewhat rigid example of a standard draw, but it is not worth blaming the social network for it.

“My parents and younger sister do not know at all that something like this happened. However, my older sister thought the rally was pretty cool and original, ”says Simrin. He abandoned his idea because “people began to be offended,” although he believes that they are partly jealous of the young man: “Most of those who chat on the Internet are just jealous. They don't want to see how people succeed in life. ”

Paul McCartney and Jimmy Fallon played out the guests of the Rockefeller Center in New York. VIDEO

In Florida, a pranker hairdresser pretended to cut off a client’s ear. VIDEO