Seattle Mayor Jenny Durcan said she is going to regain control of the so-called "Occupy Capitol" protest zone. It is occupied by protesters who have declared it an "autonomous zone." According to the mayor, the police intend to return to the area in the near future, writes Air force. 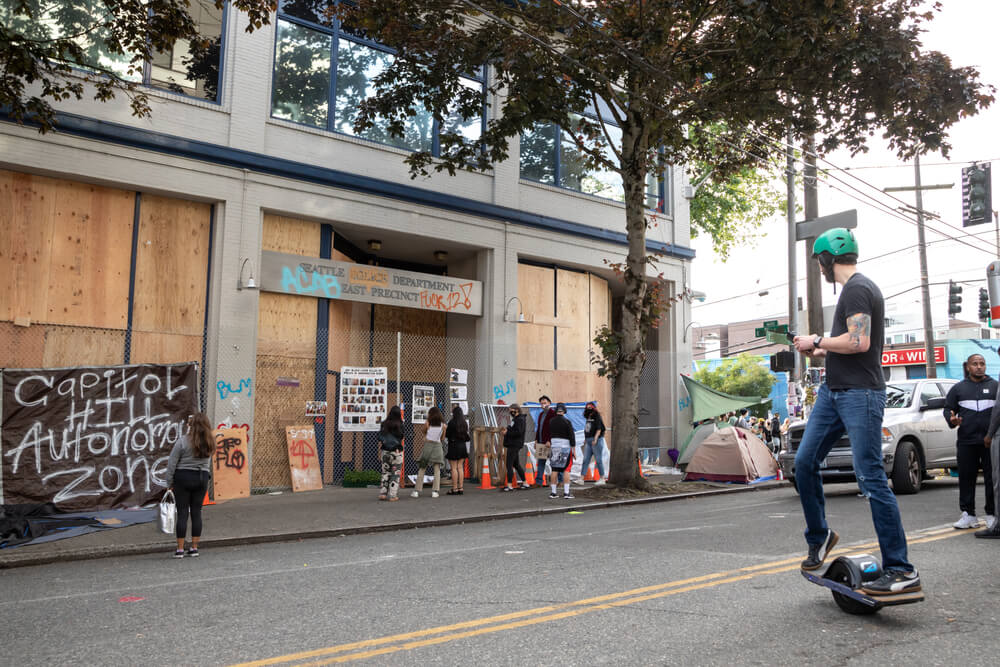 There over the weekend, three people were injured in incidents involving firearms.

On Saturday morning, June 20, a 19-year-old man was killed and a 33-year-old man was seriously injured. On the evening of Sunday, June 21, a 17-year-old was wounded in the arm. He refused to testify.

In the afternoon, the zone looks peaceful. Protesters relax in the park, and volunteers give them free food. However, armed attacks, rape, apartment robberies and acts of vandalism became more frequent there at night. Demonstrators staged noisy processions, some openly carrying weapons.

What is this zone?

Following the May 25 death in Minneapolis of an African American, George Floyd, at the hands of a white policeman, mass protests began in many US cities, including Seattle, Washington's largest city in the far northwest of the country.

In Seattle, they acquired a particularly aggressive form. On June 8, the territory of the Eastern District of the city became a real battlefield between demonstrators and law enforcement officers. During the clashes, the police decided to leave the area, allowing the protesters to occupy the police station building.

On the subject: In Seattle, protesters set up a police-free zone: what's going on

At first, the state governor ordered the National Guard to be introduced into the city, and the mayor ordered a curfew, but on June 8 the authorities retreated and the police left the area.

Shortly afterwards, CNN asked the mayor a question about when the authorities were going to regain control there.

"I do not know. I hope we have a summer of love ahead, ”she replied.

When Donald Trump announced on June 15 that he could send the National Guard to restore order in the city, state governor Jay Insley and mayor Jenny Durcan responded by advising him to go about his business and "Return to the bunker".

What do the authorities say now?

“The cumulative impact of constant gatherings and protests and the nighttime atmosphere of violence make it increasingly difficult for businesses and the population to exist. The impact is increasing and security is decreasing, ”the mayor said at a news conference on Monday.

Seattle police chief Carmen Best said that after a Saturday shootout, a hostile crowd did not allow her subordinates, as well as ambulances to get to the scene and help the victims.

According to the head of the city, the police will return to the area in the near future, and this will happen peacefully, for which the authorities intend to enter into negotiations with protesters.

The part of the city in question has been significantly improved in recent years after employees of high-tech companies renting apartments there raised demand and housing prices.

The protesters planted a community garden there and wrote on the wall of one of the houses in huge letters: “Black Lives Matter”.

Bloody weekend: wave of killings and injuries among protesters swept across the USA

“Bugalu Boys”, “Proud Guys” and “Antifa”: which groups participate in protests in the USA

In Seattle, protesters seized part of the city and city hall: Trump was advised to 'return to the bunker'

Riots in the USA: in Virginia, the leader of the Ku Klux Klan drove into a crowd of protesters