Home In the U.S. How the Victory Day celebrations were held in the USA

How the Victory Day celebrations were held in the USA

This year, contrary to expectations, Victory Day in America passed without much conflict. "Forum" tracked how Russian-speaking residents of America, Ukrainians, Belarusians, Americans themselves, as well as Russian-speaking Jews, who celebrate Victory Day twice for the second year already, celebrated the holiday.

The 8 of May in Washington Victory in Europe day was marked by a parade. 56 aircraft that took part in World War II were raised to the sky. Among them are fighters, bombers, transport aircraft. 15 groups, each of which symbolized a different battle of the Second World War, in which American aircraft took part, starting with Pearl Harbor.

For the first time after the 11 events of September 2001, aircraft were allowed to fly over the Washington National Museum Mile, located between the White House and the Congress buildings. The last time combat aircraft circled Washington in 1972.

Also yesterday, the rally dedicated to the 70 anniversary of the victory in the Great Patriotic War and the meeting of Soviet and American troops on the Elbe ended.

Machines with flags of the USSR, Russia and the USA started in Florida, in the city of Naples under the march “Farewell of Slavs” and reached Washington.

At the first stage, the convoy was accompanied by four motorcyclists with the flags of Russia, Ukraine and Belarus. “We are taking photographs with us to organize traveling exhibitions about the war along the way, ribbons of St. George, leaflets that we will distribute at bus stops,” said Mikhail Farfel, director of the Russian Center in Orlando.

Among the participants are West Coast activists and 84-year-old WWII veteran Alexey Farfel. In the 10 age, he became the son of the 133 Tank Regiment, and then rose to colonel. At one of the sections of the rally Farfel himself sat behind the wheel of a car.

Participants of the rally distributed St. George ribbons along the whole route.

In New York, the ribbons began to distribute 2 in May on Times Square, Manhattan’s central square. The action was conducted by activists of the society "Russian Youth of America". 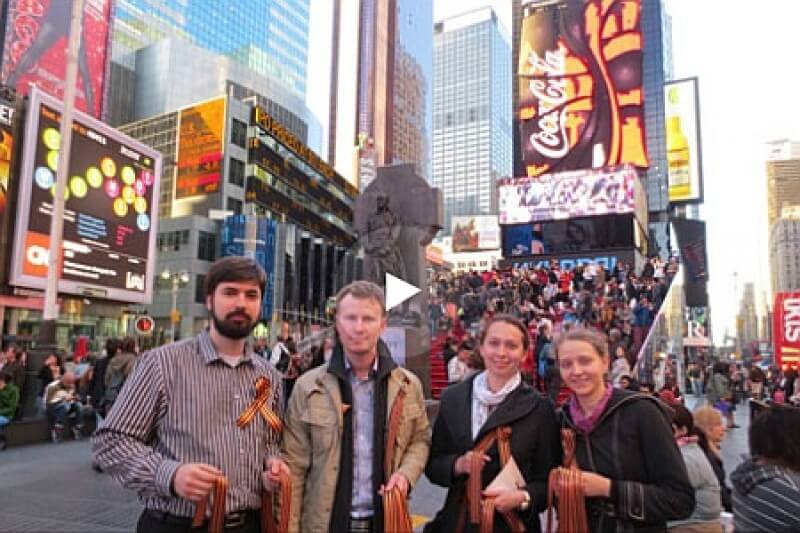 Another event was held by activists near the Brooklyn Bridge. The action ended with the flight of an airplane that was dragging an 30-meter orange-black ribbon over Brooklyn. 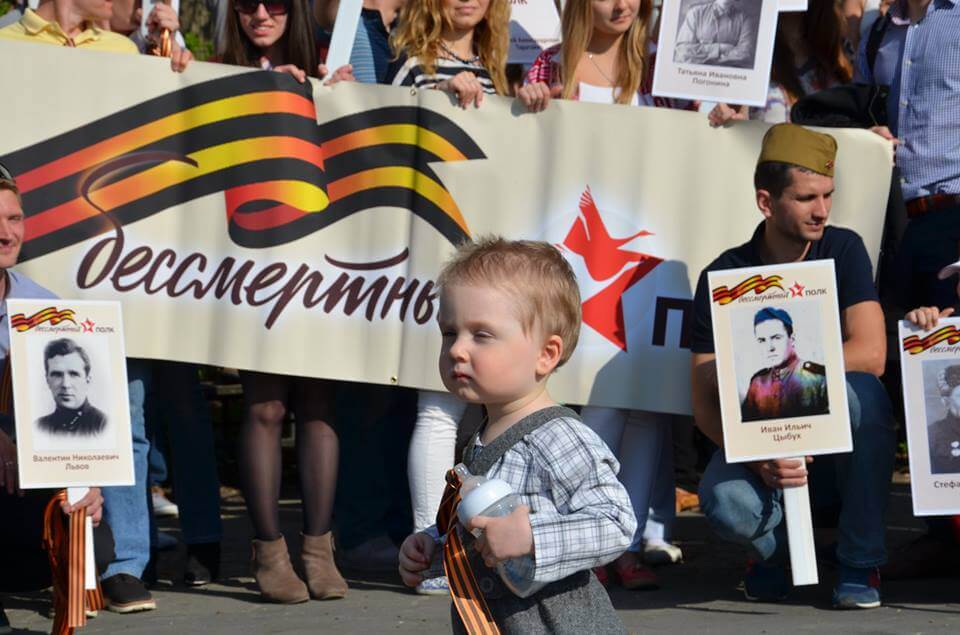 The counter-action in connection with the events in Ukraine was organized by an American lawyer of Belarusian origin Yuras Zyankovich. He was joined by immigrants from Ukraine. The slogans sounded "Glory to Ukraine - Glory to Heroes!", "Long live Belarus!"

According to her, there were no conflicts at this holiday. “I arranged a holiday for everyone, regardless of political views. We held a flag parade - 15 flags of the former Soviet republics and flags of the allies. Russian, Ukrainian, Georgian, Crimean Tatar children danced on the stage ... dancing, ”Pechenik says.

She also promised that the events at Brighton Beach will continue on Friday and Saturday (May 8 and May 9) with concerts and dinners and veterans.

On May 8, Ukrainian activists also gathered to lay flowers in Brooklyn, under the monument to soldiers who died in World War II. 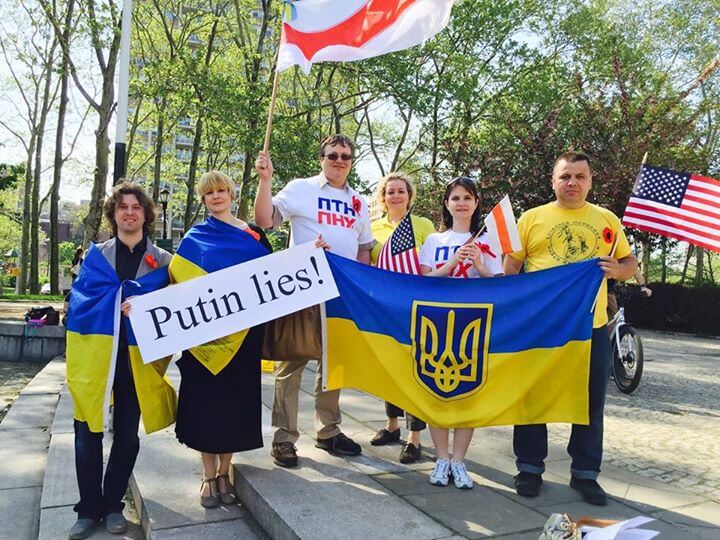 Many Russian-speaking Jews already the second year marks Victory Day twice: according to the Gregorian and Jewish calendars.

In New York, 15 in May at the Urbo Club in the Times-Sver. The American and World Russian-speaking Jewry forums are hosting a reception in honor of World War II veterans living in recent years in the United States.