Ukrainian borscht was included in the UNESCO list of intangible cultural heritage in need of urgent protection. Writes about it Ukrainian Truth. 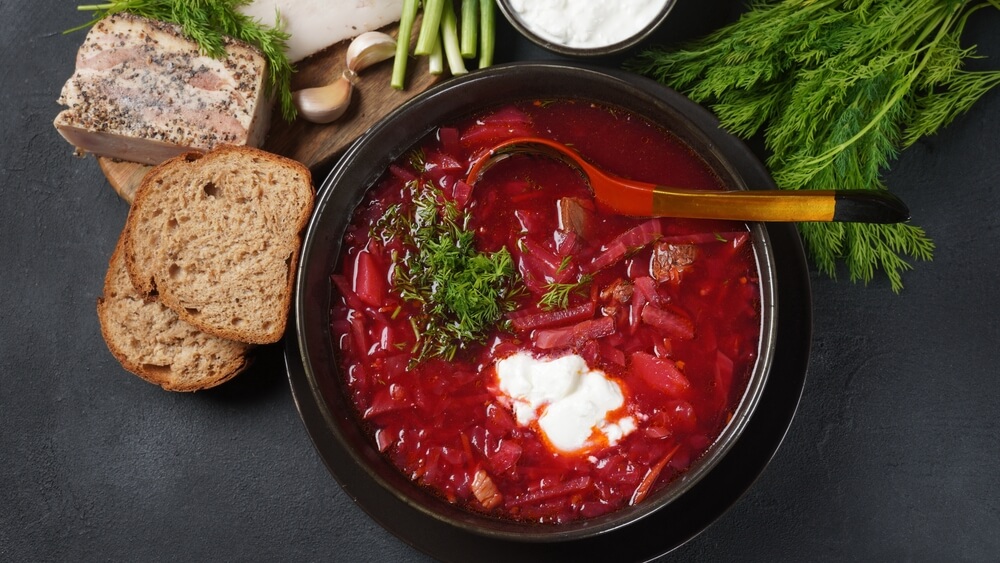 This decision was made on July 1 at the 5th extraordinary meeting of the Intergovernmental Committee for the Protection of the Intangible Cultural Heritage.

“Victory in the war for borscht is ours!” - said the Minister of Culture and Information Policy of Ukraine Oleksandr Tkachenko on Facebook.

The application "Culture of cooking Ukrainian borscht" was included in the UNESCO list at the initiative of the Ministry of Culture of Ukraine, expert Marina Sobotyuk and famous chef Yevhen Klopotenko.

On the subject: The battle for borscht and the hummus war: how countries argue over national dishes

“The battle for borscht started before the war. And no matter how much Masha Zakharova said that “cooking books were forbidden, and the recipe was kept secret and forbidden to cook” and in general our borscht is “a manifestation of extremism and Nazism”, this “manifestation of extremism” is now officially Ukrainian, and officially under protected by UNESCO,” Tkachenko said.

In March 2021, the Ministry of Culture submitted a nomination dossier “Culture of cooking Ukrainian borscht” to UNESCO for consideration, which should have been included in the representative list.

This issue was planned to be considered in 2023, but because of the war, the cultural heritage was under threat from the aggressor.

Therefore, it was decided to include the Ukrainian nomination in another list: the UNESCO list of intangible cultural heritage in need of urgent protection.

“We will be happy to share borscht and its recipes with all civilized countries. Yes, and with the uncivilized, too, so that they have at least something light, tasty and Ukrainian. But remember and be sure: both in the war for borscht and in this war we will win, ”said Tkachenko.

Then add a whole onion, pepper, head of corn, quince, salt and sugar, and then carrots and potatoes, also whole.

Cook all ingredients until tender over low heat.

Meanwhile, bake the beets separately in the oven or oven.

Fry the meat (ribs) in a pan, transfer to a pot of water and put on fire.

After 30 minutes, add chopped potatoes, after another 10 minutes - chopped cabbage and dry mushrooms soaked in boiled water, cook for 20 minutes over low heat.

In the meantime, prepare a roast for borscht: pour oil into a hot pan to fry onions, throw carrots into strips here and add cranberry sauce, then chopped beets and simmer for 30 minutes.

At the end of cooking borscht, fill it with frying, add spices and garlic.

Red borscht is usually in broth, so you need to cook it first.

Next, cut the beets into strips, salt, pour into a pan, fry in lard, add tomato puree, a little sugar and bring to half-cooked.

Throw the potatoes into the broth, bring it to half-cooked again, then put the cabbage and cook for another 10 minutes, and then season with frying and let it boil for another 5 minutes.

Pour beans with water to swell for 2-3 hours or overnight. Then cook over low heat.

Boil the beets for 40-45 minutes whole in their skins, add one tablespoon of vinegar to the water, cool, peel and grate on a coarse grater.

Boil vegetable broth: chop onions, carrots and parsley in 2 liters of water and keep on fire for 30 minutes. Then add chopped white cabbage and cook for another 10 minutes. Add beetroot, bay leaf, allspice and cook everything together for 5 minutes.

Prepare the broth: cut the meat into pieces, add a little chopped onion, salt, bay leaf, peppercorns and wait until boiling. After that put the chopped potatoes.

While the potatoes are cooking, prepare the dressing, which is the basis of the taste of borscht: finely chop the onion and bell pepper, grate the carrots and beets on a coarse grater. First fry the onions and carrots, then add the grated beets with chopped peppers and a piece of butter - fry, stirring constantly.

Dilute tomato paste with broth and add to fried vegetables. Cover with a lid and bring to a boil. Then add salt, sugar and ground pepper.

Add dressing to boiling broth, mix everything, add thinly sliced ​​cabbage. Grind the greens and add when the borscht is almost ready.

Before serving, add a spoonful of sour cream.