Home In the U.S. Tesla started selling tiny autonomous homes: what they have and how much they cost 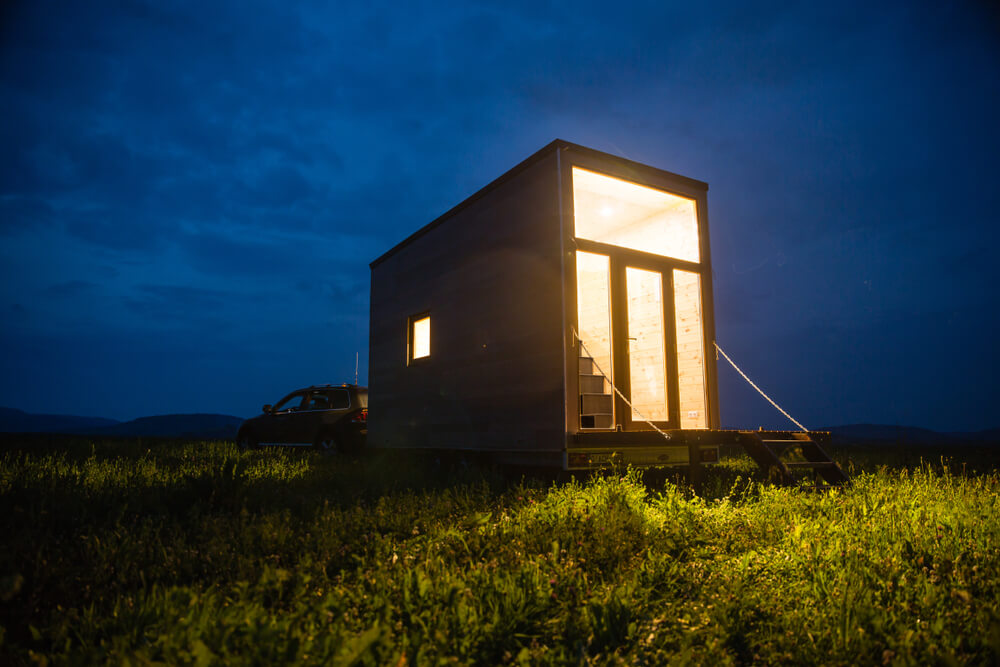 The miniature house contains a Tesla mobile studio and configurator. With its help, prospective owners of Tesla Tiny House will be trained to create a solar energy storage system for the home. Qled.

Tiny House is 100% powered by renewable energy from a small solar plant. The solar system has a power of 2 kW and a Powerwall, and the house also contains a configurator that allows you to calculate how the house can generate clean solar energy using solar panels. The energy itself is stored in the Powerwall and can be used throughout the day and night. Also, the flow and conservation of energy can be controlled using a special app from Tesla.

The Powerwall is safe for children and pets with no exposed wires or hot holes. The system can be wall-mounted and up to ten units can be placed together on the floor. Regardless of where the power system is installed, it remains waterproof and dustproof in all weather conditions. Works with virtually no noise, much quieter than generators.

WHY TESLA TINY HOUSE IS SO GOOD?

Obviously, the home designer is so talented that even Musk wanted to live there.

Musk now lives in a 37 square meter studio. His house was designed boxable Is a construction startup that specializes in easy-to-assemble residential units.

A modular home starts at $ 50. This amount does not include the costs of landscaping, permits and connection to utilities. Musk has enough money to complete the details with his designs and take modular homes to the next level.

Here are a few characteristics that the company has listed:

Boxable homes are built in factories to fold into shipping containers. So it's pretty easy to figure out what's inside the mysterious house, which uses steel, concrete and styrofoam. It took them years of prototyping to decide which materials would not destroy the walls. The floors and roof are made of laminated panels, which makes them legal to move on the highway.

On the subject: Smartphone addiction: which apps do we spend almost a third of our lives on

Free shipping is available in some states, but there are additional fees for remote destinations. The $ 50 price includes shipping and unboxing, and other features must be added to the price. The house has plumbing, electricity and air conditioning, pre-installed and ready to connect.

This small house is one-story. You can add more modules by combining them with the living space. The house comes fully furnished with a studio setup.

It also has a 3m ceiling and large windows and doors. Its small size is achieved by a part-sized kitchen, which has a refrigerator, double sinks, dishwasher and countertops that line the walls, creating a dining area. A home has a low carbon footprint (carbon footprint is the total greenhouse gas (GHG) emissions caused by an individual, event, organization, service or product, expressed in carbon dioxide equivalent). This way, you can put your home wherever you want.

Unlike the rest of the world's billionaires, Musk no longer owns luxury yachts and multi-million dollar homes. He has been trying to live this way for many years.

Apparently, Musk does not regret his decision at all. He tweeted this when asked about a tiny house in Texas.

We all know that the reason Musk has suspended Bitcoin payments for Tesla vehicles is due to environmental concerns, as he sees sustainability as Tesla's core value. It makes sense that he would like to live in a tiny house.

Since it is built using installation technology and uses LED lighting, it increases the comfort of residents and saves resources. These homes are durable, snow-resistant over 90% of North America, and can be retrofitted to fit the remaining 10%.

Tiny houses usually use less energy and take up less space than conventional dwellings, thus having less impact on the environment.

Doctors in the USA transplanted a pig's heart into a human: this is the first such transplant in history