Home In the U.S. Record season: US meteorologists are short of names for 2020 hurricanes

The 2020 Atlantic hurricane season has been so intense that meteorologists have nearly run out of names for new storms. Fox News. 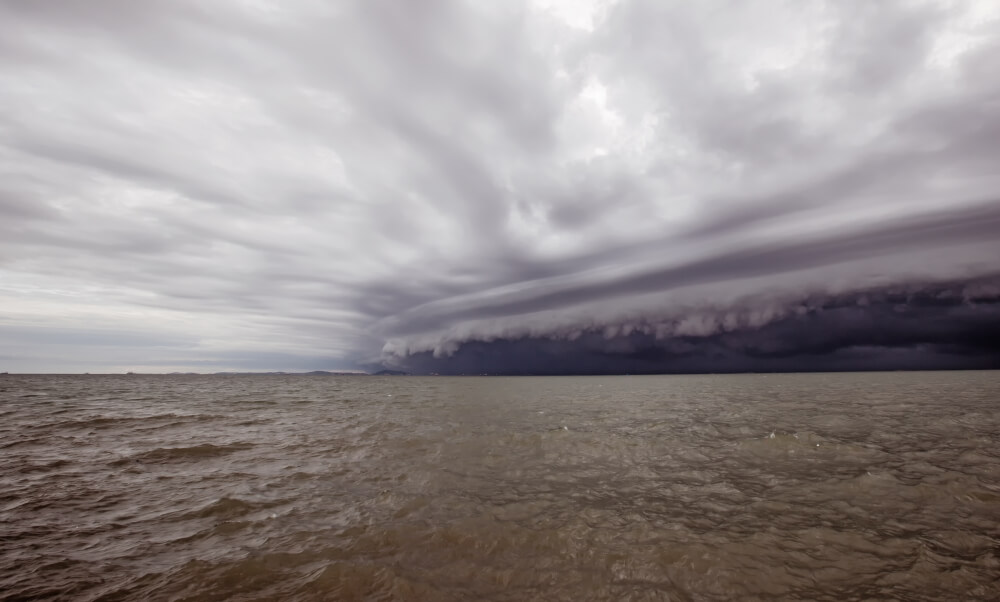 The recent spate of activity in the busy 2020 Atlantic hurricane season has left only one name on the official list, with several weeks ahead, during which new storms are possible.

On Monday, September 14th, Storms Teddy and Vicki got their names - and there is only one name left to the end of the list. What happens when they run out?

After all 21 names have been used, according to the National Hurricane Center (NHC), "additional storms will be named using the Greek alphabet."

Storms are named by the international committee of the United Nations World Meteorological Organization (WMO). 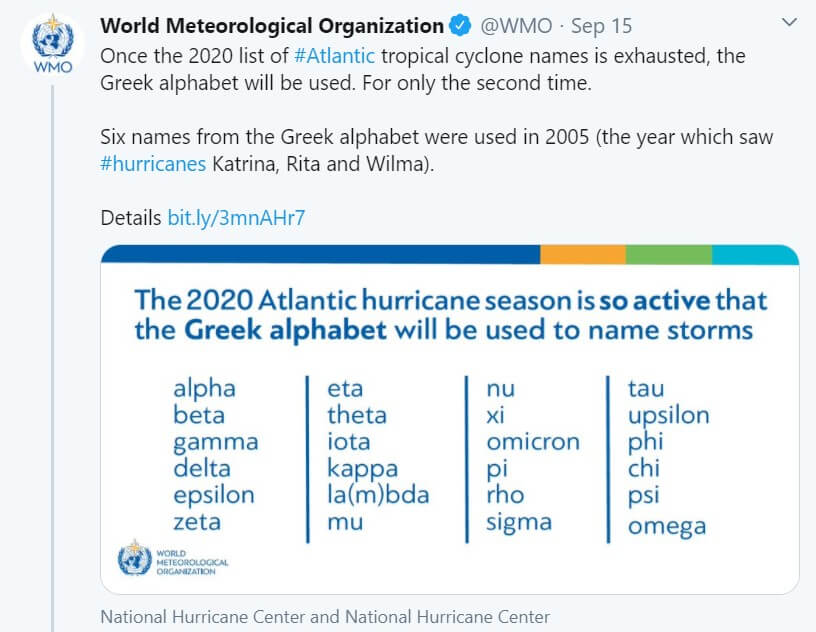 The only time that the Greek alphabet was used in storm names was in 2005, when 28 named storms occurred in the United States, including the historic hurricanes Katrina, Rita and Wilma.

On the subject: Catastrophic damage and flooding: Hurricane Sully made landfall in Alabama

According to WMO, the National Hurricane Center (NHC) was supposed to use the Greek alphabet to name a tropical cyclone when the record meteorological event Alpha occurred in October 2005.

Other names from the Greek alphabet were used that year: Beta, Gamma, Delta, Epsilon, and Zeta. 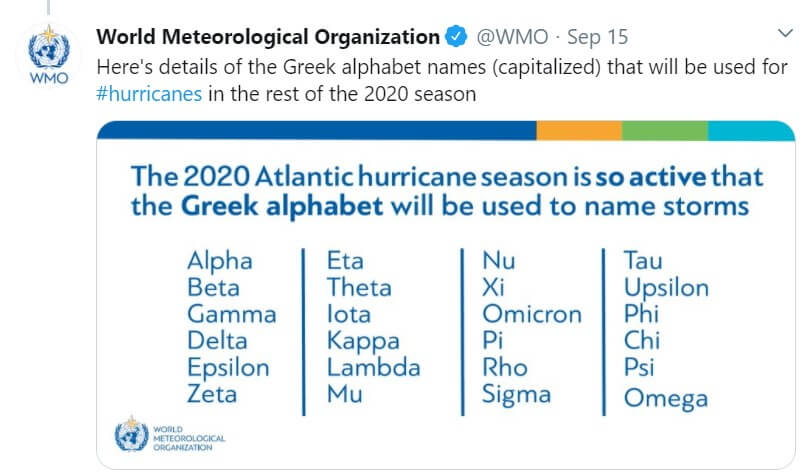 Another fact is that if the storm is particularly deadly or catastrophic, the name may be changed. For example, you will never see Hurricane Katrina again.

But it is worth noting that in 2006, WMO decided that since the Greek alphabet is not used often enough and no changes are proposed for the foreseeable future, it is not advisable to exclude any of these rare names from hurricane history.

“Therefore, it was decided that if a significant storm, designated by the letter of the Greek alphabet, in the Atlantic or the eastern basin of the North Pacific Ocean, is“ deregistered ”, it will be included in the list of obsolete names with the year of occurrence and other details, but the specific letter the Greek alphabet will continue to be available for future use, ”says WMO.

According to the NHC, hurricane names are split into six lists that are used alternately and change every six years, so the 2019 list of names will be used again in 2025.

Forecasters from the NHC said Monday, September 14, that they are issuing recommendations for five tropical systems over the Atlantic Basin.

"This sets the record for the most tropical cyclones in this basin at one time, last set in September 1971," NHC tweeted.

This is well above the average year. According to data from 1981 to 2010, these are 12 storms with names, 6 hurricanes and 3 major hurricanes.

So far this year there have been 20 named storms, including 7 hurricanes, of which one is a strong hurricane.

NHC forecasters said on Tuesday, September 15 that another area of ​​bad weather, located a few hundred miles southeast of the Cape Verde Islands, has a 70% chance of developing a tropical depression over the next 5 days.

Party worth millions: what threatens a family who accidentally started a forest fire in California