There are many fascinating places in the world, and many of them are located in the USA. Therefore, residents of the country do not need to travel around the world to see some of the most fantastic natural and man-made objects and structures that our planet has to offer. 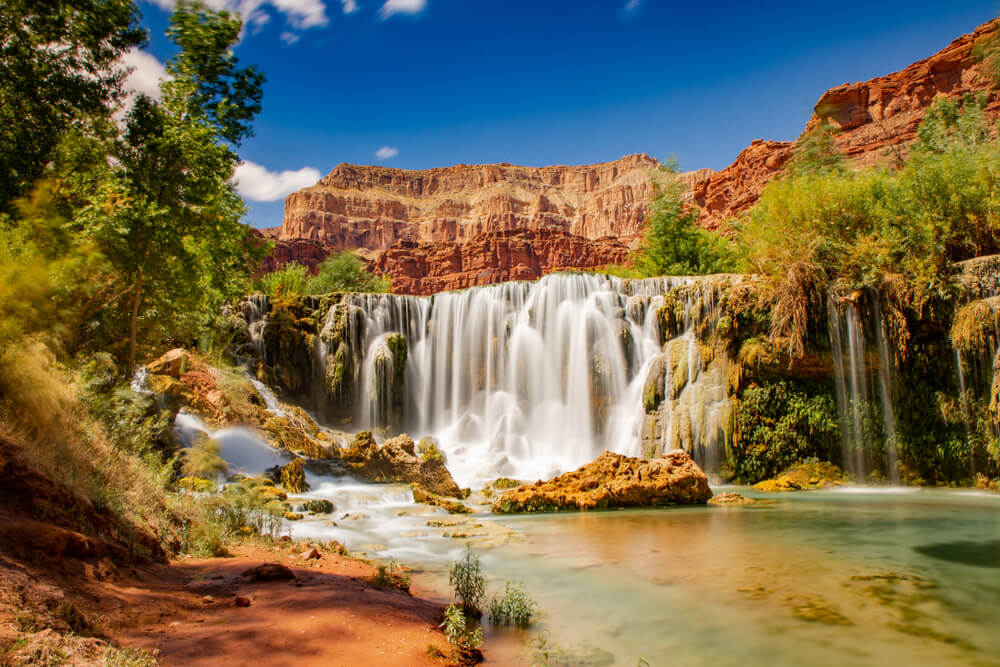 A list of the “Wonders of the World” in the United States has compiled an edition Only in your State.

The Grand Canyon is one of America's most recognizable natural wonders. It was recognized as a UNESCO World Heritage Site in 1979 and continues to amaze visitors with its drama and grandeur.

The Grand Canyon has a length of 277 miles (365 km) and has been around for almost 6 millions of years. It was formed when the Colorado River made its way through the stone, it took centuries and turned into a fascinating natural phenomenon.

Native Americans lived in the region for a long time. The first European to see the Grand Canyon was García Lopez de Cárdenas from Spain, who came across the area in 1540.

Niagara Falls is another world-recognized natural wonder of the United States. There are actually three separate falls, which are collectively referred to as Niagara Falls.

Together, these waterfalls are the most powerful waterfall on Earth, the water here falls from a height of more than 165 feet (50 meters). Today, the waterfall is one of the most popular places for domestic and international tourists, it also attracts thousands of artists and photographers from around the world.

In these forests grow the tallest trees on earth. Giant red trees and redwoods attract visitors from all over the world.

Red trees and redwoods look alike, but they are actually very different types of plants. The red trees prefer a moist environment and grow predominantly in northern California. They can reach heights in 378 feet (115 meters).

Sequoias more like the dry heat of the mountain areas. They grow lower than red trees. The tree, nicknamed General Sherman, weighs somewhere 1,2 tons and is over 100 feet (30 m) in diameter. Today it is the largest living organism on the planet.

This desert, located in Death Valley National Park, is one of the most unique natural sites in the world. It is the lowest, driest and hottest place in North America.

The desert is located at an altitude of 282 feet (86 m) below sea level and is considered the hottest place on the planet. In 1913, the highest recorded air temperature on Earth was recorded here: 134 degrees Fahrenheit (57 degrees Celsius).

Rare showers sometimes lead to a complete transformation of this region, when a seemingly barren desert turns into a paradise filled with flowers.

These surreal dwellings are located in the Mesa Verde National Park. This is the largest house on the cliff in North America, and, of course, one of the greatest national treasures of the country.

Built thousands of years ago, this massive complex was inhabited by people for no less than 150 years before it was mysteriously abandoned. Some scientists believe that droughts have devastated the food supply in the area and forced local people to relocate.

Architecture Cliff palace very exciting. Since the average height of men and women during the construction of dwellings was significantly less than it is now, the scale of buildings and doorways is much smaller than can be expected. More than 150 rooms were excavated, it is assumed that the palace may have been the center of a larger city or community.

It is impossible to describe in words how breathtaking the sight of this man-made miracle is. This structure is literally encrusted with precious stones that shimmer with colored lights on the entire building.

The grotto is the lifelong work of the German immigrant Paul Dobberstein. As a young man in Germany, Dobberstein became very ill and vowed to build a shrine in honor of the Virgin Mary if she would help him recover. And he fulfilled his promise in the United States.

Doberstein collected stones for the shrine during 14 years before construction began, and worked on building for 42 years of his life until his death in 2002.

Located in Distribution Bay, this huge glacier is over six miles (10 km) wide and over 400 feet (122 m) high. Icebergs often break off from it, which only improve the picture.

Most of this glacial massif is actually hidden under water, which is even more impressive when you see how huge its visible part is.

NASA Earth Observatory suggests that the Hubbard glacier thickens, which means that over time it will only increase in size.

Top 10 most famous places in the USA

15 places for a romantic weekend in America