Home In the U.S. Russian military say they drove the American destroyer in the Black Sea 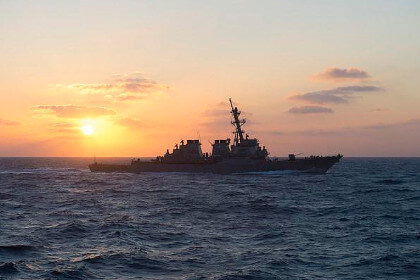 In the US Sixth Fleet, they deny that Russian military aircraft forced the destroyer Ross in the Black Sea to change course. The corresponding statement was distributed by the press service of the fleet.

It is noted that "Ross", while in international waters, observed the flight of the Su-24, however, no impact from his side on the destroyer was not followed. The ship continued its mission and after observing the aircraft returned to base.

It is emphasized that the destroyer did not allow aggressive actions, and also did not deviate from his operational plan.

"US Navy ships operate in the Black Sea on a regular basis in accordance with the Montreux Convention and international law," the press release said.

Earlier, RIA Novosti in the power structures of the Crimea stated that the Black Sea Fleet’s Su-24 aircraft had forced Ross to withdraw into neutral waters in the Black Sea. It was noted that the crew of the ship behaved provocatively and aggressively.

“Raised by the Su-24 team demonstrated to the American crew the readiness to harshly stop border violations and defend the interests of the country. The destroyer urgently turned around and went into neutral waters in the eastern part of the Black Sea, ”the source said.