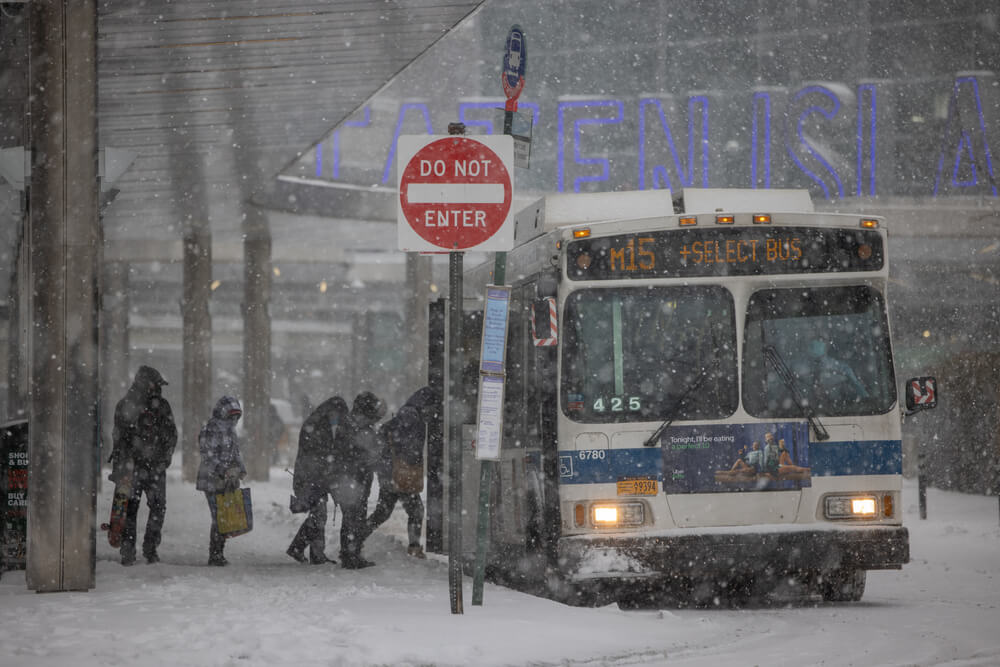 Parts of eastern Pennsylvania and northern New Jersey received more than 2 feet (61 cm) of snow. According to the National Weather Service, the highest rates recorded to date were in Nazareth and Enshent Oaks, Pennsylvania at 31 inches (78,74 cm).

New York City's Central Park was covered in more than 2 inches (17 cm) of snow on the morning of Tuesday February 43,18, making the winter storm one of the 20 worst blizzards in the city's history.

Thank you to our #CentralParkConservancy colleagues for working around the clock, so all New Yorkers can safely enjoy its 843-acre backyard year-round. pic.twitter.com/wWmksxY2CF

Snowfall is expected to be heaviest on Tuesday, February 2, in northern New England, with another 6-12 inches (15,24-30,48 cm) falling. Lighter snow is expected in most of the northeast.

But it's not just heavy snowfall and weather that worries officials: coastal flood alerts from Maine to southern Delaware are reaching more than 16 million people.

The New York Governor's office warned on Monday February 1 that areas along the coast could survive "multiple rounds of flooding, especially during high tides."

As a WNY native, this is what I'd call a “light dusting” on the Upper West Side - but NYC is in for a lot more today. Snow coverage ❄️ all morning long with @patkiernan @JamieStelter @AnnikaPergament @ErickAdameOnTV on @NY1 pic.twitter.com/AuLrZb4cQ0

According to CNN meteorologist Michael Guy, on the morning of February 2, mild to moderate flooding was reported along the coast of the region, enough to flood basements, roads and cause minor structural damage. The water level is currently 2-4 feet (60,1-122 cm) above normal, Guy said.

“This type of flooding is extremely dangerous and even fatal,” Guy added.

“For the safety of both workers and those assigned to vaccinations, we will postpone meetings until tomorrow at several vaccination sites affected by the storm,” Cuomo said in a statement. "To be clear, nobody is losing their appointments - they will all be rescheduled when conditions become safer."

In New Jersey, where a state of emergency remains in effect, Gov. Phil Murphy announced that state offices and six state immunization stations will remain closed on Tuesday, Feb.2, due to weather conditions.

“Heavy snowfall, coastal flooding and high winds are expected to continue in the state today and tomorrow,” Murphy said February 1. “I urge all of our residents to follow weather-related guidelines and stay off roads to ensure access for key workers and emergency personnel.”

Watch as snow accumulated in New Jersey from Sunday into Monday. Certain regions of the Garden State are expected to end up with nearly 2 feet on the ground 🌨 pic.twitter.com/4GkNiHBmTb

In Pennsylvania, where Gov. Tom Wolfe signed the hurricane emergency statement, officials said on February 1 that they were concerned about how the conditions would affect vaccinations.

“During a hurricane, the Pennsylvania Emergency Management Agency works with our state and county partners to make sure we have a clear understanding of the storm and its impact on different parts of the state,” said PEMA Director Randy Padfield.

“We are particularly concerned with the shipping and delivery of COVID-19 vaccines, so we appreciate citizens who take this storm seriously and stay off the road, because fewer vehicles means fewer incidents that could delay these operations,” Padfield added.

Chocolate and snow were both on the menu yesterday as Hershey, Pennsylvania, got a taste of snowfall from a rapidly approaching storm. https://t.co/jyL4yPySdW pic.twitter.com/gH5E9yF7F4

Dangerous travel conditions in the region

When a storm hit Connecticut on February 1, Stamford authorities announced they had rescued two people from a pickup truck that had been hit by high winds, snowfall and a high tide that filled the car with water.

In the afternoon that day, firefighters found the truck partially submerged and floating 40 feet (12 meters) offshore. Rescuers reported that a woman stood on one side of the car and shouted that the man was locked inside.

The firefighters swam to the vehicle and were able to get the woman out using an air ladder, while trying to rescue the man as quickly as possible, as the truck was quickly completely flooded with water, ”the fire department said.

“One firefighter held the man's hand and was able to pull him out through a small window after the truck was completely submerged,” the department said. "When he was free, the firefighters put him on the stairs and both passengers were taken ashore."

On the subject: Why colds and flu are more common in winter than in summer

The New Jersey State Police said they responded to more than 1 traffic accidents and over 660 car problems in about a day on the evening of February 1000.

“Help for motorists can be with anything, from flat tires to mechanical breakdowns, slippage, etc.,” the police said. "We urge residents to stay off the road."

Test yourself: 5 myths on how to warm yourself in the cold

Even the Earth wanted 2020 to end sooner: last year the planet rotated faster