Home In the U.S. Blurred Roads and Flooded Homes: Fay Tropical Storm Falls on US

The tropical storm Faye is rapidly moving up the east coast. Although it cannot be called strong, this meteorological event threatens locally heavy rains, gusty winds and dangerous conditions on the beaches in some parts of the northeastern United States. Weather.com. 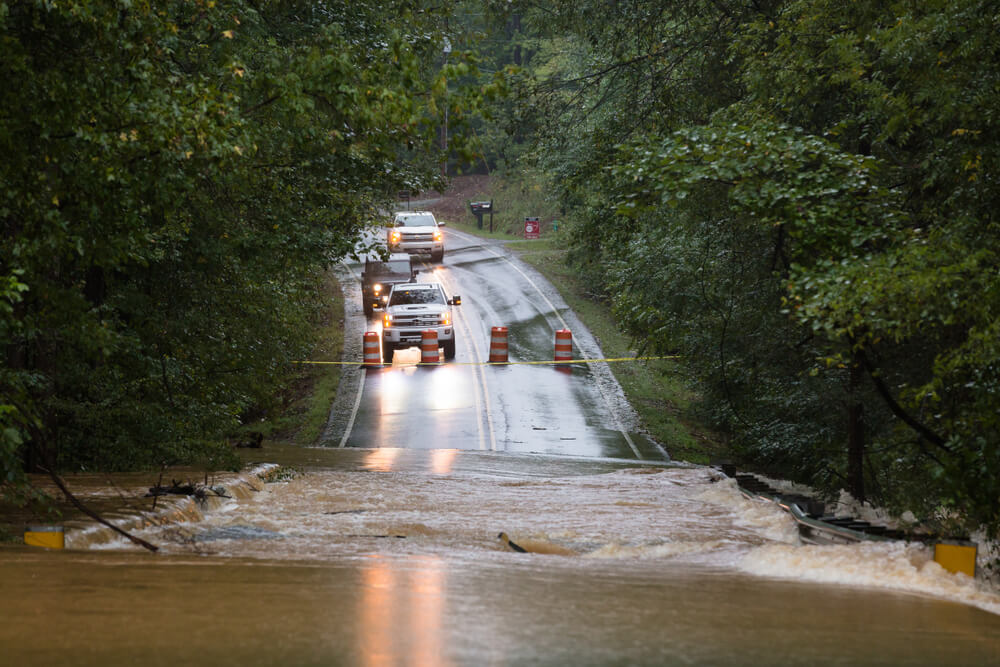 Late Thursday evening, July 9th, the Atlantic-formed system became the Faye tropical storm and was concentrated near the Outer Banks in North Carolina.

According to the morning of July 10, the storm is concentrated east of the Delmarva Peninsula and moves north. Most of the rain associated with the Faye storm is north of its center, while spreading along the coast of Jersey Shore.

According to the National Meteorological Service, local flooding of roads and residential areas was recorded in the morning at Long Neck, Delaware. Flash floods have also been reported in Bethany Beach, Delaware.

A tropical storm warning has been issued for portions of the coast from Cape May, New Jersey, north to Observation Point and Rhode Island, including Long Island and Long Island Sound.

Flood warnings were issued from the Delmarve Peninsula towards southern New England and the Hudson Valley, including the entire New York area of ​​the three states (covering parts of New York, New Jersey and Connecticut), as well as the Albany, Hartford areas and Philadelphia. 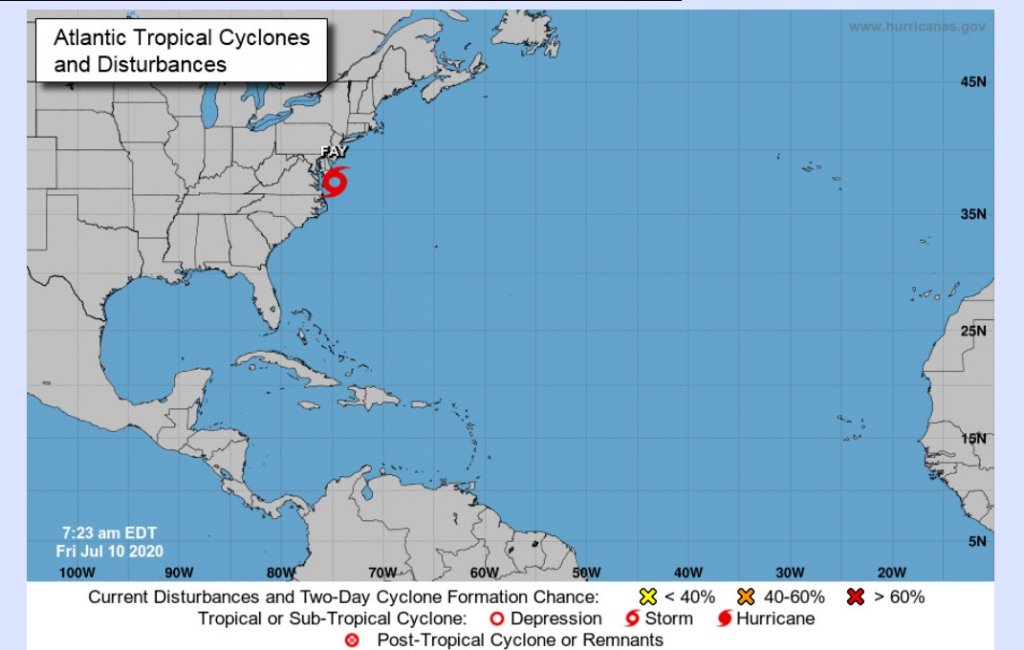 Forecast by days of the week

Friday July 10: The Fei Storm Center will run along the Jersey Shore during the day, and then towards evening will move deeper into the lower Hudson Valley. Rain strips will extend from the Delmarve and Jersey Shore Peninsulas to parts of eastern Pennsylvania, central and eastern New York, and southern and western New England. Dangerous conditions on the beaches, including fenders, are expected in some areas of the Mid-Atlantic coast and further in the direction of Long Island and Connecticut.

Saturday, July 11: In the morning, heavy rains associated with the Faye storm can pass in the territory from central New York towards the northern part of New England, in the afternoon they will quickly transfer to the territory of Canada. 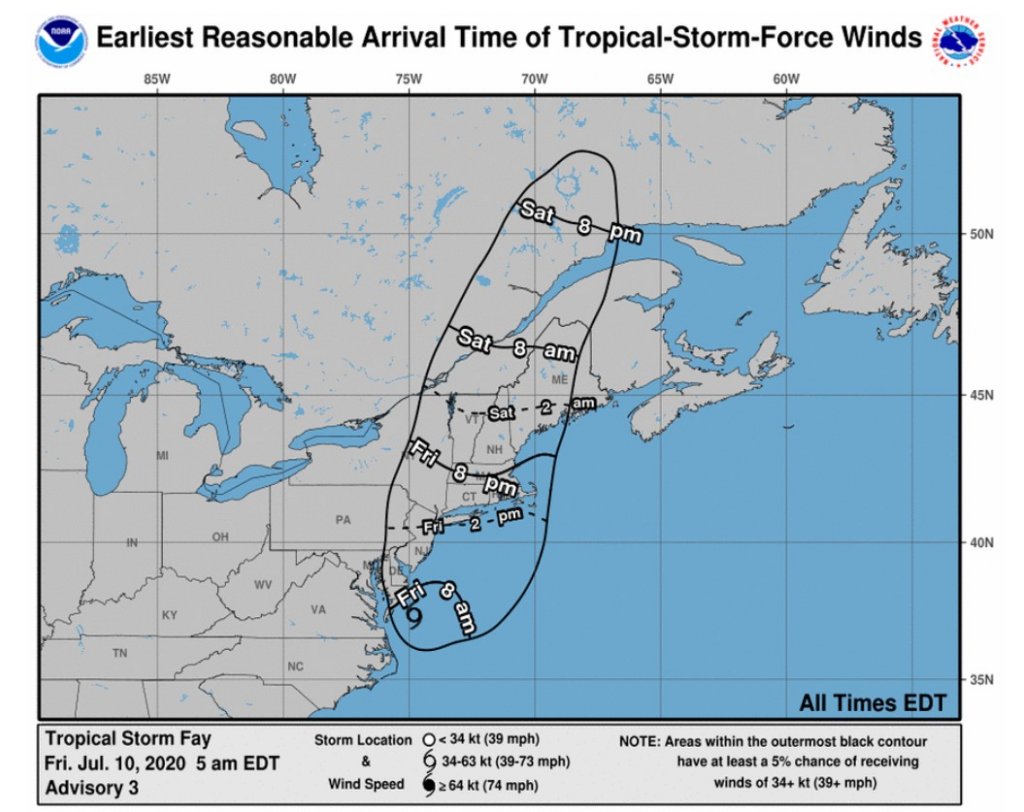 Local heavy rains will be the main result of the impact of a tropical storm Fay until the afternoon of Saturday, July 11.

In areas from the coastal portion of the central Atlantic to upstate New York, as well as parts of New England, at least an inch of rain (2,5 cm) may fall on Saturday. More abundant precipitation is possible where rain or thunderstorms linger for several hours, which can lead to a sudden local flood.

Such a threat is highest in urban areas and in places where heavy rains have already occurred earlier this week (July 6 and later), including areas of New Jersey, eastern Pennsylvania and southeastern New York.

On the subject: Research: all New York airports may be under water by 2100

Widespread destructive winds are not expected from this system. But coastal areas from the Mid-Atlantic coast to Long Island and southern New England can record gusts of wind over 30 miles per hour (48 km / h).

According to the NOAA Storm Prediction Center, it is likely that a Faye storm can generate thunderstorms with isolated destructive gusts of wind or short tornadoes on the evening of Friday, July 10, in the direction from New Jersey to southern New England. 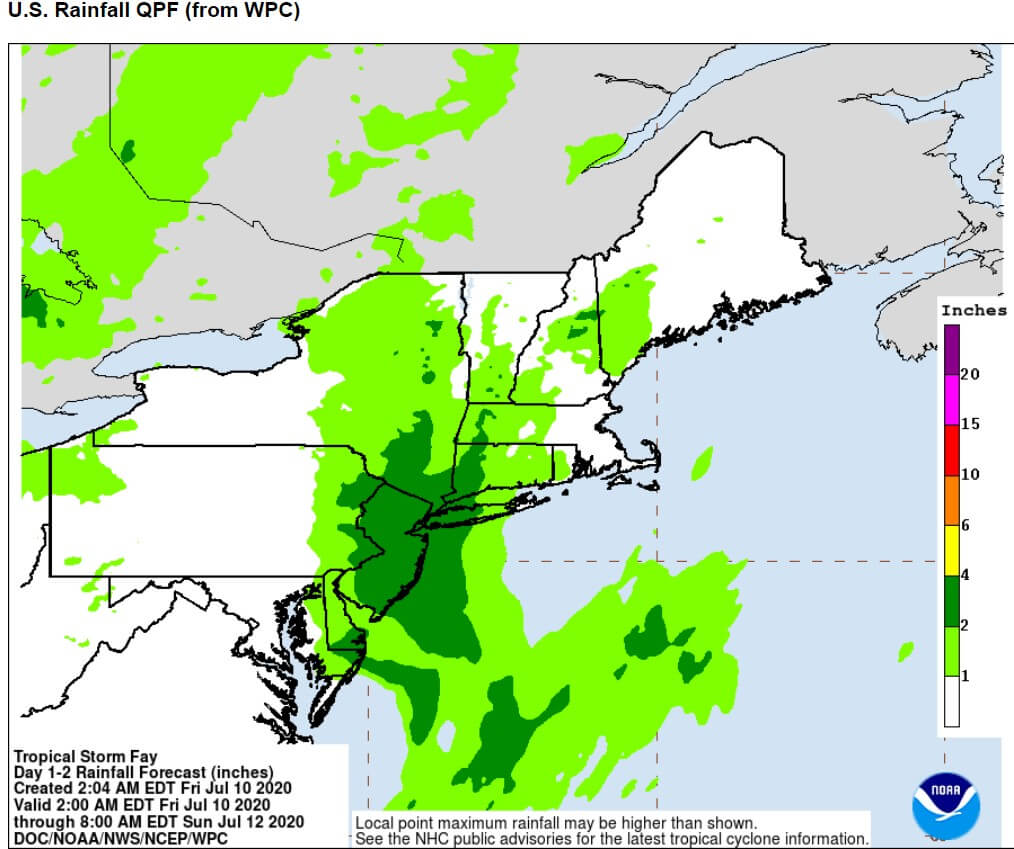 Tropical Storm Fay is the earliest sixth tropical storm to occur during hurricane season. The previous record was set on July 22, 2005 by Storm Franklin.

Although a sixth tropical storm prior to mid-July is unheard of, previous hurricane seasons were significantly more severe.

In addition, July tropical depressions or storms usually form farther east along the warmer Gulf Stream. North of the Virginia border, water temperature usually drops rapidly. Few tropical systems at this time are gaining strength so close to the Mid-Atlantic or Northeast coast. 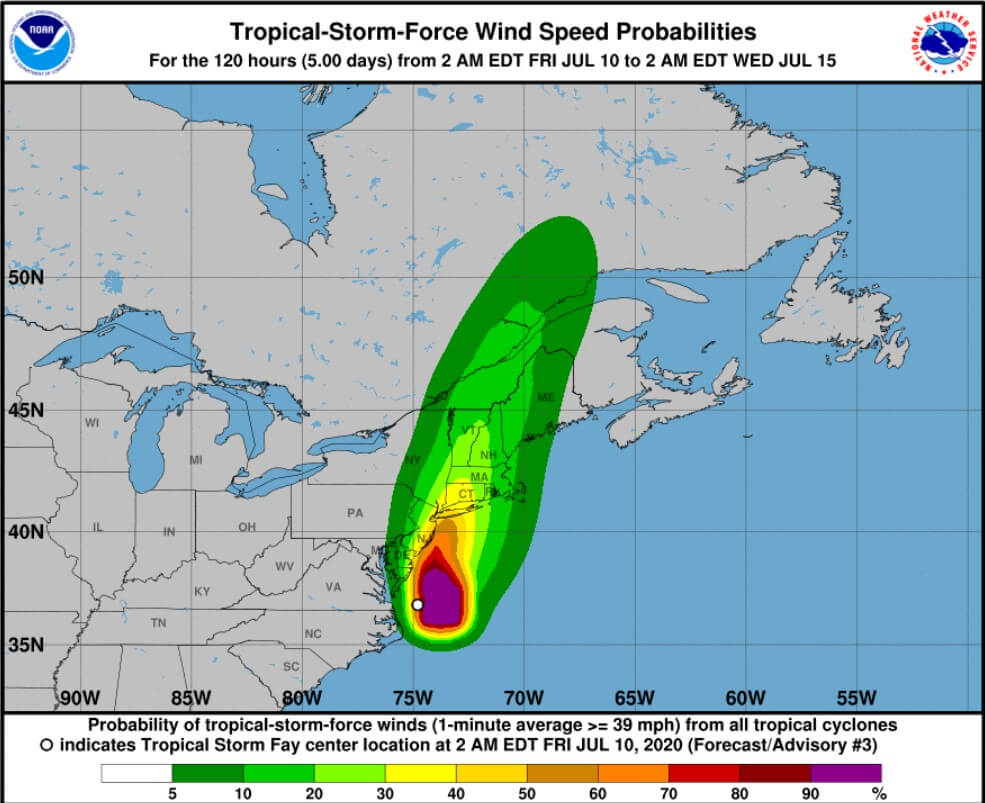 Heavy rain in the southeast

On Tuesday, July 7, when the weather system had not yet become a storm, but was already actively developing over the southeast, flash floods occurred in areas of the Savannah Valley in eastern Georgia and western South Carolina with rainfall of up to 7 inches (slightly less than 18 cm).

Tuesday, July 7, was the rainiest July day in August, Georgia. This is a new record after 1887.

According to the local emergency department, in South Carolina, floods entered at least three homes in Edgefield County. At least one road is washed out, Interstate 20 and Interstate 520 interstate sections are flooded.

According to the National Meteorological Service, one observer in Hunting Island State Park, South Carolina, reported 12,75 inches (32,38 cm) of rain that flooded the roads and forced the park to close.

Further, Fey's storm circulation shifted off the coast of North and South Carolina. The system collected enough thunderstorms near its center to be considered a tropical storm.

By 2100, half of the world's beaches will disappear due to climate change