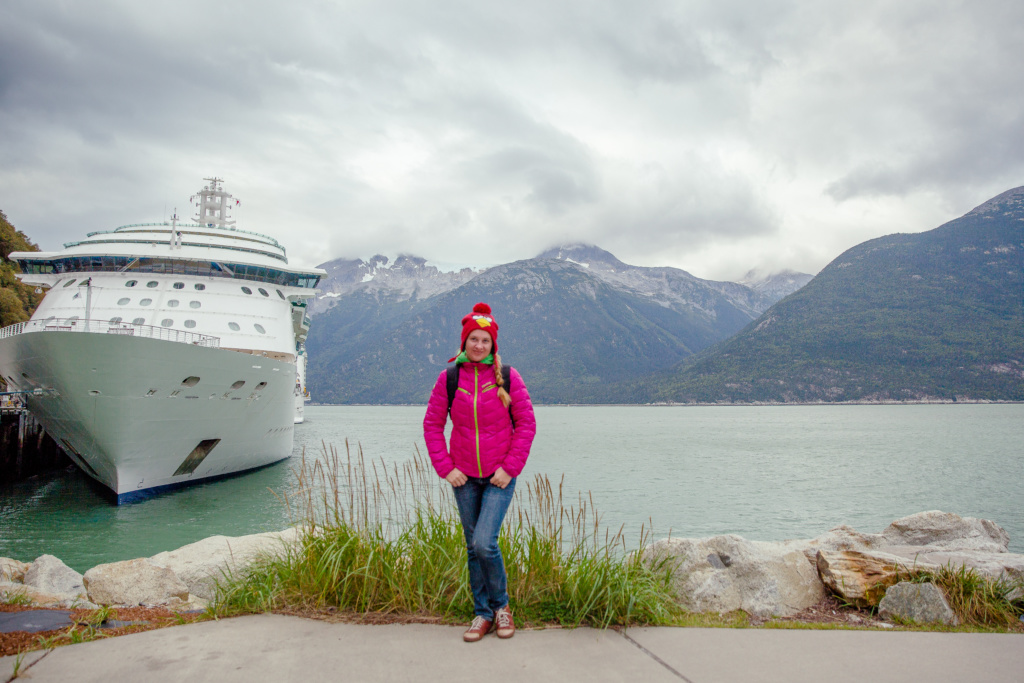 Photo: From the personal archive of Elena Kukhareva

I am a photographer from West Palm Beach, Florida. At the age of 12, my dad gave me a Zenith - and away we go! First for myself, then for friends and, finally, professionally. I AM live photoI want to convey the life through my work and capture the best moments of it.

Back in 2005, when I was still living in Russia, in one online project, a quiz was held for the most cherished desire. It was necessary to write to Santa about him, and this project, depending on the originality of the desire, promised to fulfill it. My wish was next - to visit Alaska and see whales.

I wrote the desire, but did not receive any answer, after which I decided that I would realize it myself, sooner or later! And so, having immigrated to the United States, I began to study the question: how to organize a trip to Alaska. At first I had the idea to go to work at a fish factory, then to go by car, but these plans were never realized, and the desire grew every year.

A year ago, I thought about traveling to Alaska on a cruise ship, and this time the stars converged. In June I paid for a tour, and for the next 2 months I planned it, carefully researching the Internet and reading the forums. By the way, if you are going to Alaska, in order to make your trip more comfortable and interesting, you need to study the cities, weather conditions, routes and what exactly you want to see. Then you can choose a means of transportation - an airplane, a cruise liner, a boat, a car and so on, based on your needs.

It turned out so that everything coincided. Weather, desire, opportunities, and now - it happened! 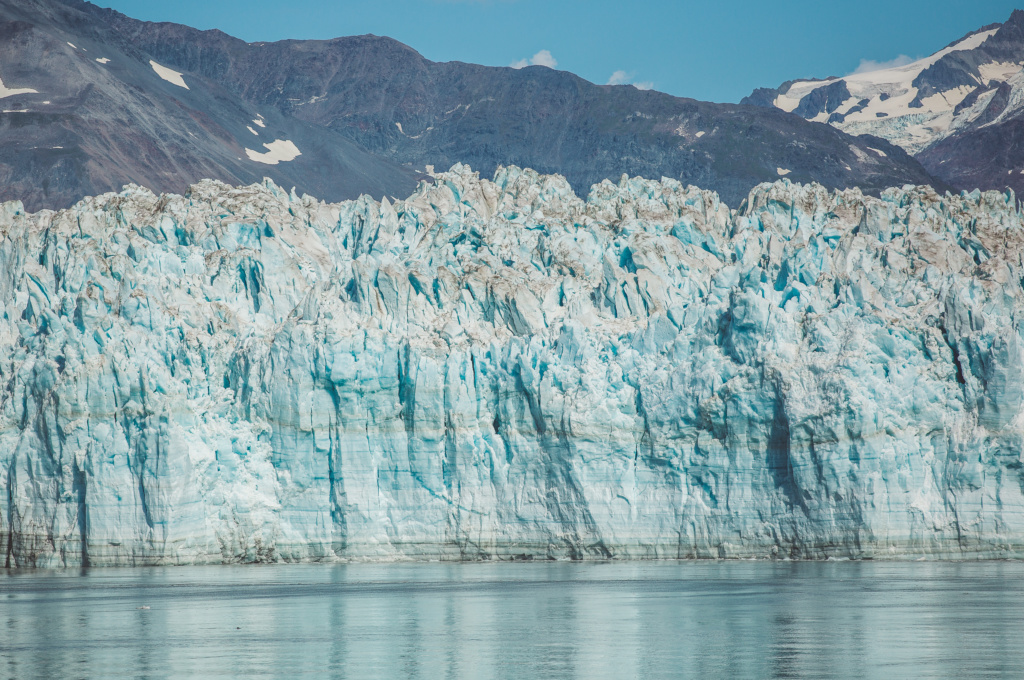 The liner goes forward at full speed - to the glacier. Cold wind in my face, I am wearing a down jacket, a sailing jacket, a hat and gloves. Snot from the nose, tears from the eyes, but I stand. The deck space was packed 2 hours before the approach. The speed drops, we go into the bay, blocks of ice grow before our eyes. The wind dies down, the gentle sun warms and then - bang! Blocks of ice, breaking off, fall into the water - and spray from a 5-storey building. And the color of the ice is from white to turquoise. This is a must see, this is a delight! 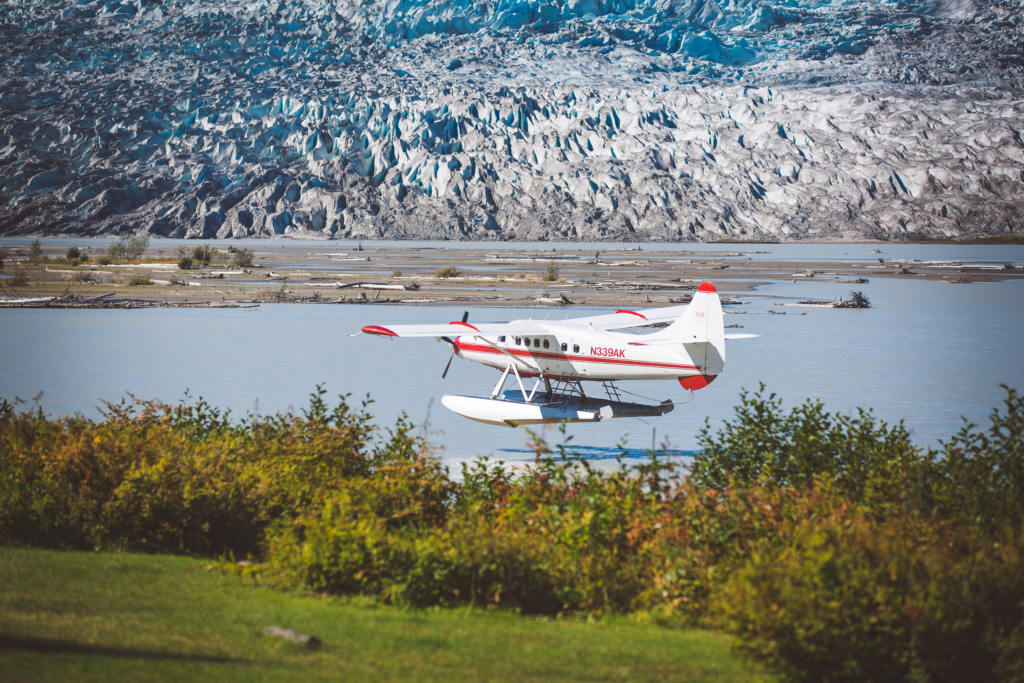 Walking around the city, I went to a travel agency that offered flights over glaciers. There were 2 flights to choose from - a regular one hour and a 3-hour one, with landing in the village and lunch. Without hesitation, I made a decision - with landing and lunch. Well, where else can I try freshly caught wild salmon cooked over coals, and even with a view of the glacier. 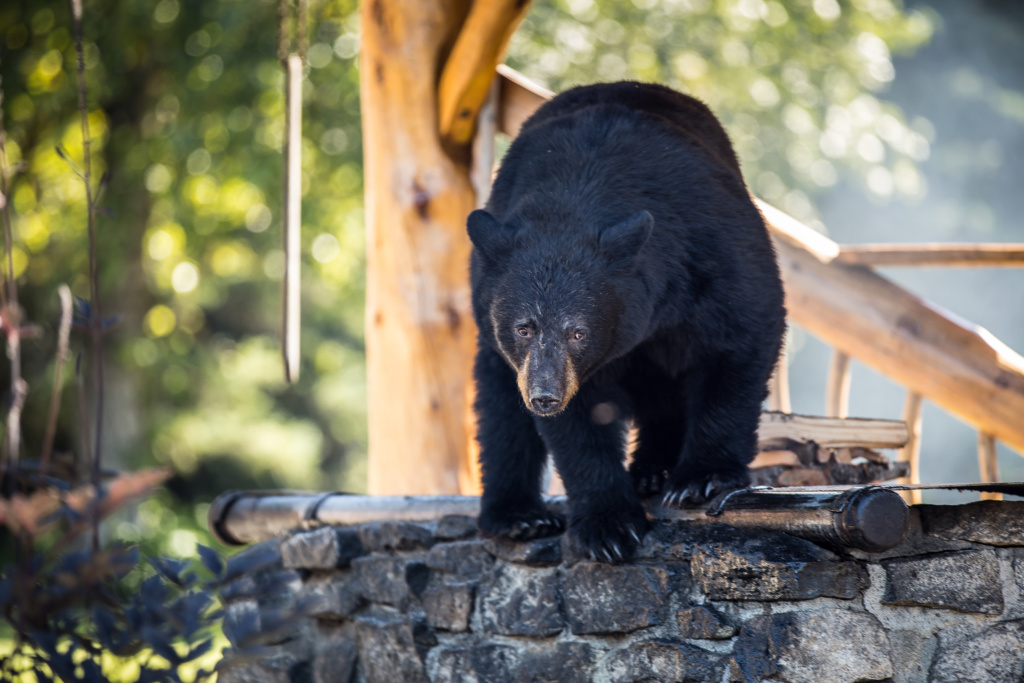 I really wanted to see him, even made a wish. And not only made a guess, but bought a special glass for the camera for the sake of this picture. And now - a complete surprise, only 30 meters from the wild beast. Run into the house or turn the camera against the sun? What would be your decision if you were in my place? And I did it without being scared. As a result - self-satisfaction and another bright checkmark in the collection.

Nesting dolls are everywhere in Alaska. In every city in the state there is a Russian shop or a Russian store, in which Russian music is played and a Russian-speaking seller works. I have not seen such a variety of nesting dolls anywhere - both in performance and in colors. Out-of-state Americans and foreign tourists are very interested in the history of this memento. Russian sellers recognize the Russian soul in me, and we talk heart to heart, remembering Russia and childhood with nesting dolls. 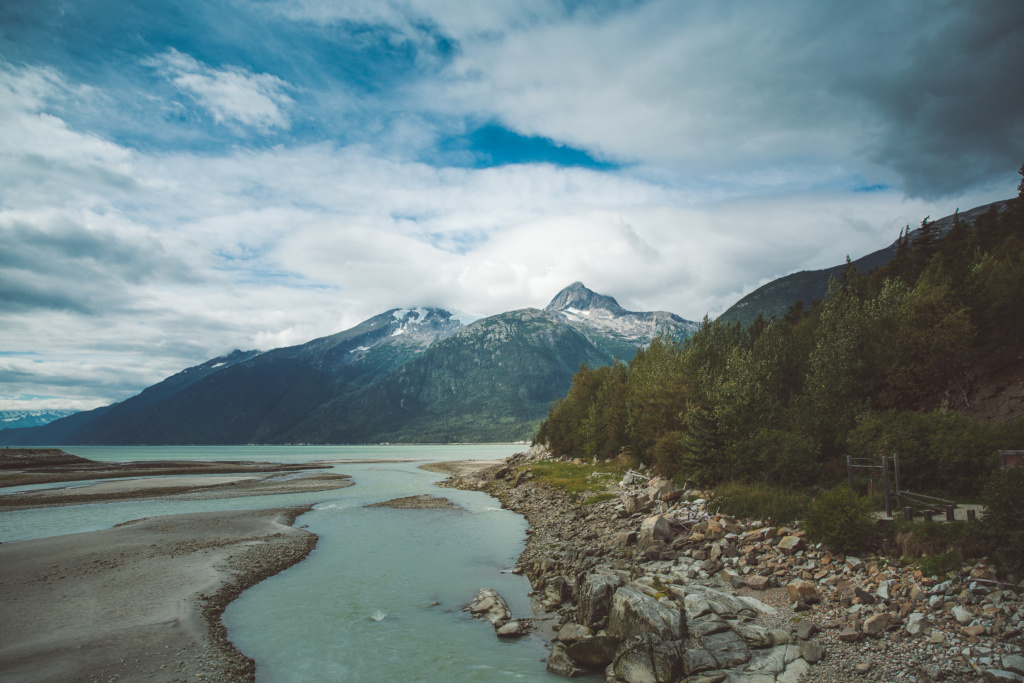 On the 4th day of the trip, we arrived at Skagway. Of all my travels in Alaska, I liked this city the most. It is a very friendly city, nestled in a gorge with well-lined streets and well-kept houses, as well as free museums. Skagway was founded in 1897 during the Gold Rush as the starting point of the journey across the White Pass to the gold mines. Mountains, snow, forest, rivers - all this can be seen, moving by train directly north towards British Columbia in Canada.

The local railway is another story. A walk around the city began precisely from the railway station, since the purpose of staying in this city was to travel by train, and the first step was to find out what tours are available, pay for the tour, and then walk around the city in anticipation of it. After speaking with the scout aunt at the tourist information house, I received a map of two routes that passed outside the city. Comparing the time, effort, volume of the backpack with the technique and the description of the map, I chose the longest, but flatter route.

Sea lions, it turns out, are epic teasers. 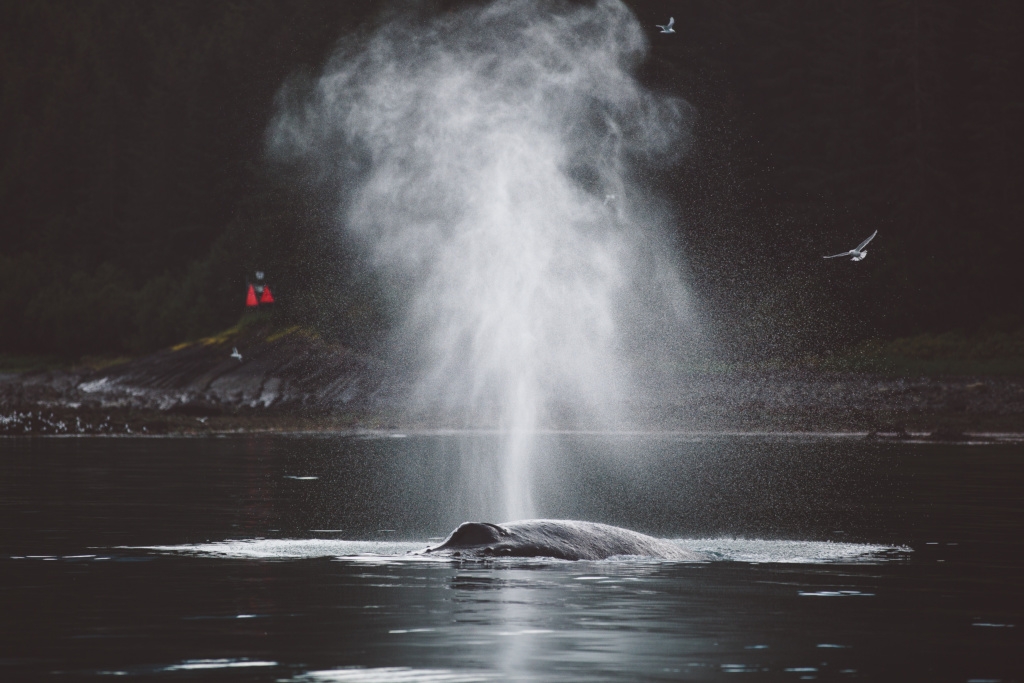 Here my cherished dream came true! To see the whale is not in the cinema, not on the TV screen, but with my own eyes, literally in 10 meters, to hear the splash and sound of water, to see its grace. 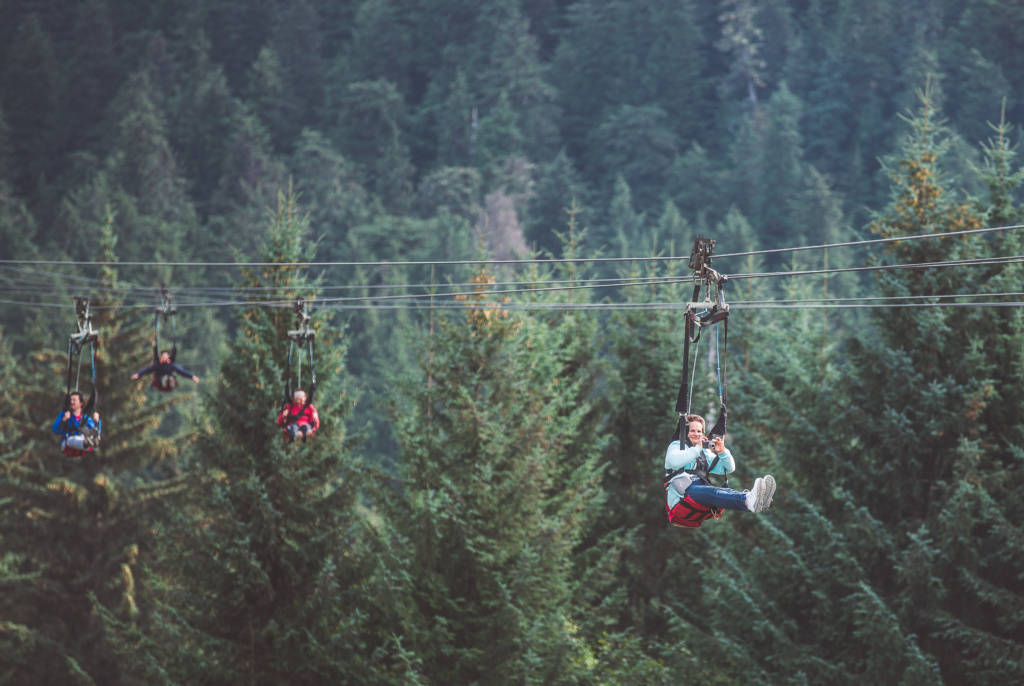 I am amazed at courageous people - those who want, can and do! No, I can only observe this from the outside. And take pictures.

Cruise liner in line to park in the waters of Alaska.

Up-down, up-down - these are the streets of Ketchikan! Totems surround the city everywhere - from souvenir shops to museums. The city is lively, with traffic, many tourists, locals and incredible beauty of the fjords. And I have never seen so many fish, if we take the natural habitat. There are many fish, it jumps out of the water, fleeing seals and trying to get upstream through the rapids. The fish is different, tasty and aromatic.

For this, my tour was conceived and implemented. It was cool, I advise everyone to visit Alaska - dreams must come true!

“Agorot” and “Butylka”: an isolated dialect of the Russian language was found in Alaska

We are going to Hawaii: what can surprise you in “Aloha State”

Unforgettable trip to Texas: what to see in the "state of a lonely star." A PHOTO

7 best ideas for traveling the US