Home In the U.S. Triple blow: two hurricanes and a powerful storm are moving on the USA

Triple blow: two hurricanes and a powerful storm are moving on the USA 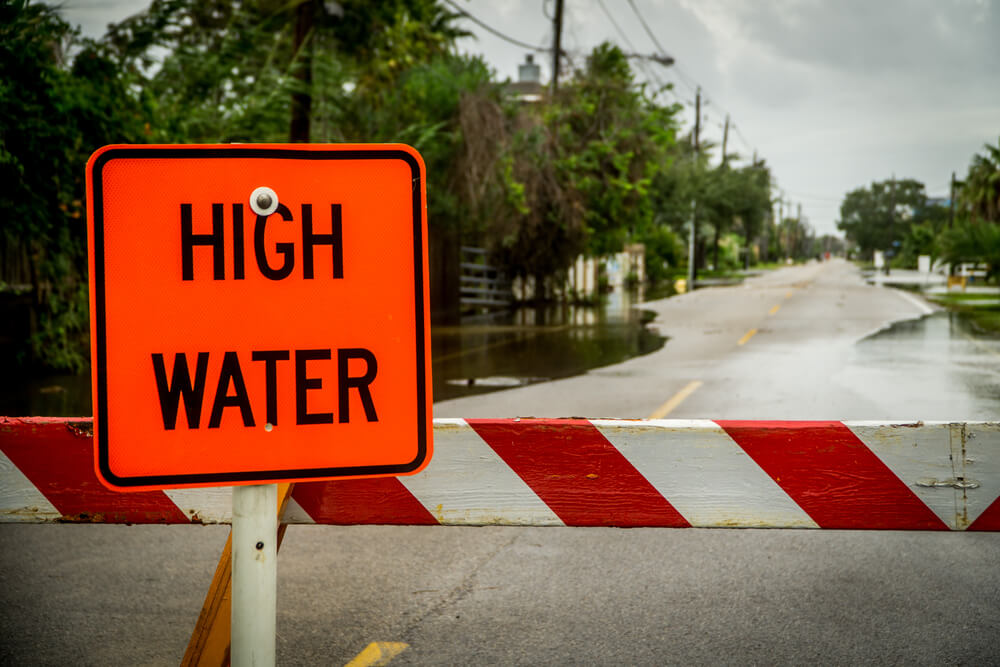 Hurricane Douglas in the Pacific threatens the Hawaiian Islands. Meanwhile, a phenomenon called Tropical Depression Eight rotates about 415 miles (668 km) from Port O'Connor, Texas. And in the Atlantic, Tropical Storm Gonzalo is expected to become a hurricane as early as Friday, July 24, and is heading west towards the Windward Islands of the Caribbean.

While several records for the earliest storms with names were set in the Atlantic in 2020 (including Cristobal, Edward, Fay, and Gonzalo), hurricane experts noted that the storms have so far been weak and short-lived.

What's next? The publication offers a closer look at each storm.

Hurricane Douglas is heading for Hawaii

According to forecasters, Hurricane Douglas has intensified far in the Pacific Ocean. He moves west towards the Hawaiian Islands. Its movement could bring strong winds, rain and flash floods to several islands on the weekend of July 25 and 26. 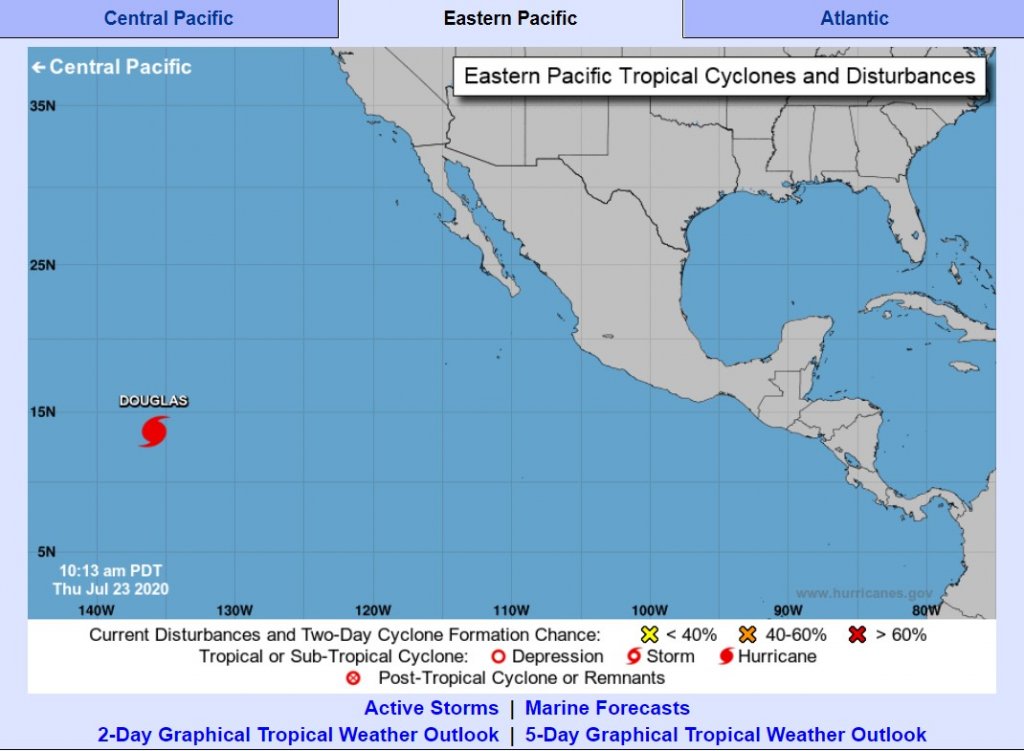 Some additional strengthening of the weather event is possible before the end of the day, the National Hurricane Center said. The experts added that “the gradual easing is projected to start closer to Friday, July 24”.

The National Weather Service said Douglas would likely become a hurricane or on the brink of a hurricane when he arrived in Hawaii.

Tropical storm Hannah may form in the Gulf of Mexico

On the mainland, the Texas coast is preparing for the arrival of the Tropical Depression Eight (TD-8), which is currently orbiting the Gulf of Mexico about 380 miles (612 km) from Port O'Connor, Texas.

Tropical storm warnings have been issued for most of the Texas coast.

The TD-8 center is expected to move across the northwest Gulf of Mexico on Thursday and Friday (July 23rd, 24th) and land ashore along the Texas coast on Saturday, July 25, the hurricane center said. A slow strengthening of the elements is expected, and in a day TD-8 may turn into a tropical storm. 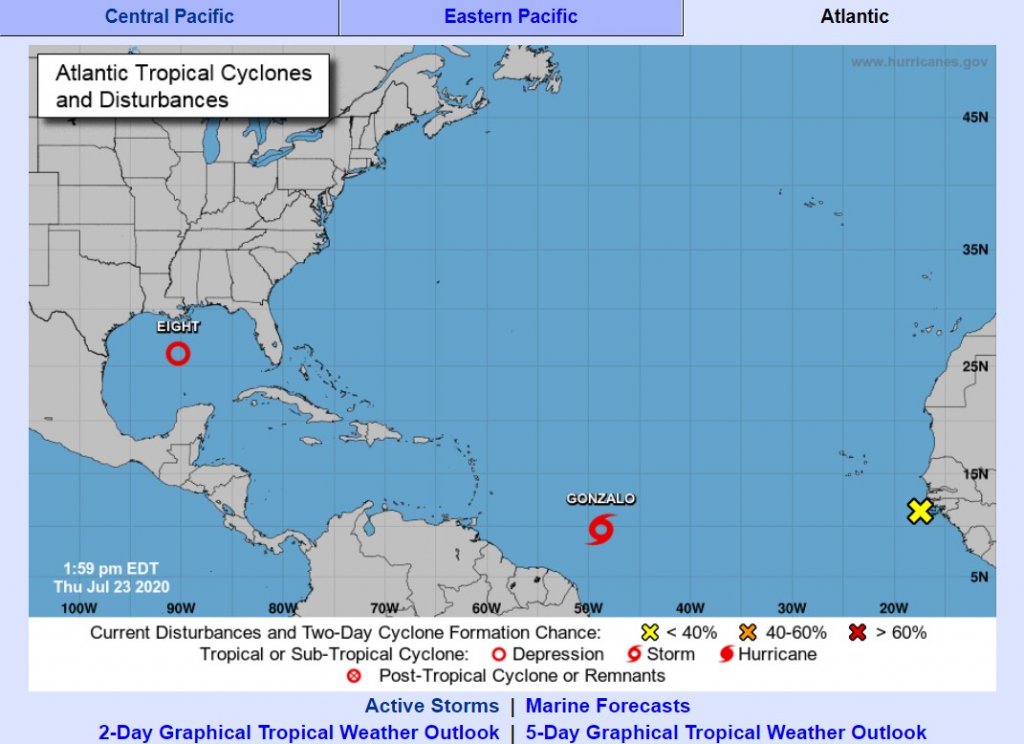 If its wind speed reaches 39 mph (63 km per hour), it will be called Tropical Storm Hanna. If the event reaches a tropical storm state, it could be considered the earliest recorded storm with a name in “H” (Hanna) in the Atlantic Basin, according to AccuWeather forecasters.

Whether or not the Hannah system is expected to produce 3 to 5 inches (7,6 to 12,7 cm) of rain, with single highs up to 8 inches (20,3 cm) through the end of Monday, July 27 , along the Gulf Coast from Louisiana to Texas. Precipitation is also expected on the mainland towards south and central Texas, the Rio Grande Valley.

In the center of the hurricanes, it was explained that threatening conditions are expected along the coast, and dangerous rip currents in the water.

Tropical storm Gonzalo could be a hurricane

In the Atlantic Ocean, according to hurricane center data, Tropical Storm Gonzalo continues to spill westward to the Windward Caribbean Islands.

Gonzalo is expected to turn into a hurricane on Friday, July 24th. Hurricane warnings are already in effect in Barbados, Saint Vincent and the Grenadines. According to experts from one of the hurricane centers, some islands have received up to 7 inches (17,8 cm) of rain, which could lead to "life-threatening flash floods."

May be a hurricane by the weekend: tropical storm Gonzalo formed in the Atlantic Ocean

Thousands of deaths: quarantine exacerbated the US opioid crisis