Home World The planet explodes from the inside: due to global warming, gas flares up in the bowels of the Earth

The planet explodes. Scientists have figured out how craters form in permafrost, reports "New time". 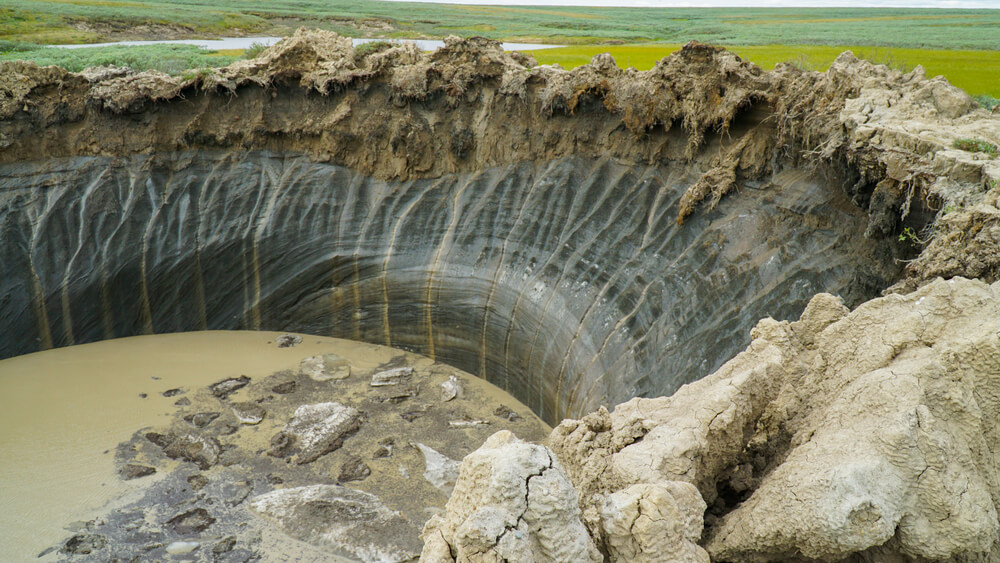 Powerful gas explosions occur on the icy soils of Siberia, a climate change-related phenomenon that leaves huge craters across the region's landscape.

Such gas emissions in permafrost pose a serious threat to Arctic communities and infrastructure, and their origin has been sought to understand since the discovery of the first C1 crater in 2014.

A team led by Evgeny Chuvilin, a leading researcher at the Moscow Center for Hydrocarbon Production, has proposed a new formation model that can explain all 20 craters that have been discovered on the Siberian peninsulas of Yamal and Gydan. Such a model should help predict where the gas might explode next, as the frequency of these events increases due to climate change.

“It is pure luck that so far none of the recorded explosions, followed by the formation of giant craters, have resulted in the death of people or damage to infrastructure,” Chuvilin said.

“Several craters were discovered several kilometers from commercial and economic sites. A potential explosion hazard exists in a significant part of Yamal, where gas accumulates in the upper horizons of the permafrost. The accumulation process can last for years, but it can also be activated quite quickly through changes in the physical and mechanical properties of the upper layers of permafrost, including changes caused by climate warming, ”he added.

Chuvilin and his colleagues based much of their findings on an expedition to explore a new crater called C17, which formed about two months after the explosion on the Siberian Yamal Peninsula in the summer of 2020.

The relative “freshness” of C17, which is more than 30 m deep, has given new insight into the dangerous interactions that occur between shallow surface layers distorted by global warming and deeper pockets of gas.

In the context of gas emissions, new research has shown that the surface caps of permafrost are weakened by the melting process, making them vulnerable to the pressure of methane gas deposits that accumulate deep underground. This degradation of the upper permafrost layer also accelerates the circulation of the underground “intrapermafrost” mixture, consisting of cold salt water and other materials, which further reduces the strength of the “cap” above it.

At a certain point, the pressure of the gas pools reaches a critical point, causing huge explosions. Given the direct link to climate change, Chuvilin and his colleagues expect these emissions to continue in the future, although they require special permafrost conditions that are especially dangerous for the Yamal and Gydan regions.

On the subject: The situation is close to disaster: a large-scale oil spill in California threatens rare animals

“We assume that explosive gas emissions in Yamal and Gydan may continue for some time, given the thawing of permafrost due to climate warming, which creates a favorable environment for the release of explosive gases from the upper layers of the permafrost,” Chuvilin said.

In addition to field and satellite surveys, the team plans to drill at the craters to better understand the complex changes taking place during the melting of the permafrost.

Ultimately, Chuvilin and his colleagues want to figure out how to identify areas that may be prone to explosions and develop ways to reduce underground pressure using degassing or drilling techniques.

Researchers from the US Geological Survey estimate that the permafrost in the Northern Hemisphere contains 793 million kg of mercury. If this permafrost melts, the consequences for humanity could be tragic.

The authors of the work studied core samples (this is a rock sample extracted from a well by means of a specially designed for this type of drilling. It is often a cylindrical column (column) of rock strong enough to maintain solidity) from the permafrost of Alaska. Scientists examined 13 cores from a depth of one to two and a half meters. Samples were taken from 2004 to 2012 at various points in Alaska.

The analysis showed that permafrost contains ten times more mercury than was obtained over the past 30 years due to anthropogenic activity.

In total, in permafrost areas, according to scientists, there is about 800 kilotons of mercury. This value is more than 2 times higher than the total mercury content in other places, including the soil, ocean and atmosphere.

The situation is close to disaster: a large-scale oil spill in California threatens rare animals

Facebook has one of the biggest disruptions in history: what caused it

In Illinois, a bat clung to a man in a dream: a month later he died of rabies

Researchers from the US Geological Survey