Home In the U.S. Clinton’s petition for more than 3,5 million signatures

On the Internet, a petition is gaining popularity, the authors of which are calling for the Electoral College, which will convene on December 19 of 2016 for the final vote for the US President 45, to support Clinton.

The petition says that Clinton got more votes from residents, and the billionaire can only win through electoral votes. “So why not take advantage of our most undemocratic institution for the victory of democracy?” The author asks.

“We urge the electors to ignore the state election results and vote for Hillary Clinton. Why? Trump is not fit for this role. His impulsiveness, assertiveness, deceit, a recognized history of sexual harassment, as well as a complete lack of experience make him dangerous for the republic. Clinton won the popular vote and should be president, ”the message reads.

Meanwhile, on the Internet and social media is gaining popularity news NBC that the state of Maryland decided to bypass the electors and cast all 10 votes for Hillary Clinton. Many media ask to be attentive and look at the date. This news really was, but it refers to the 2007 year and is in no way connected with these elections. 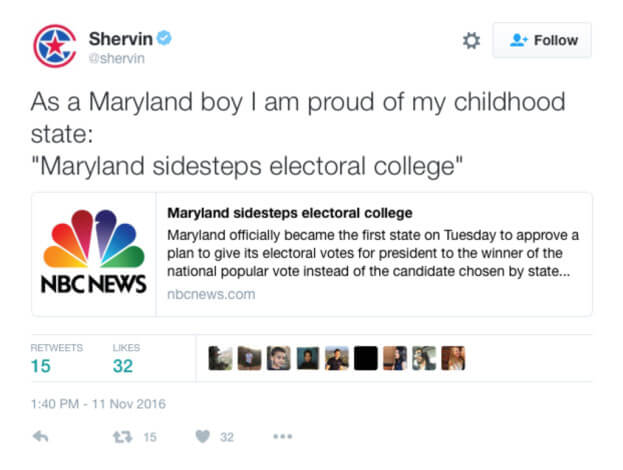 The US presidential election was held on November 8. According to the popular vote, Clinton won with 60,1 million votes, but Trump was supported by a larger number of electors (290 versus 228).

The electoral college will meet on December 19 for the formal election of the 45 president, and on January 6, Congress will approve its results. The inauguration of the new president is scheduled for January 20 2017.

Why is the US president chosen by electors, not voters

Politics in the blood: Chelsea Clinton decided to become a congressman

What photos from social networks say about Melania Trump

Presidential Office: Who will occupy key positions in the US administration