On May 23, Belarus lifted a fighter jet to land a Ryanair Athens-Vilnius plane in Minsk, which was carrying the former editor of the opposition telegram channel NEXTA Roman Protasevich. Protasevich and his girlfriend were detained. The Aviation Department has published a transcript of the negotiations between the Ryanair pilot and the dispatcher of the Minsk airport, reports mediazona. 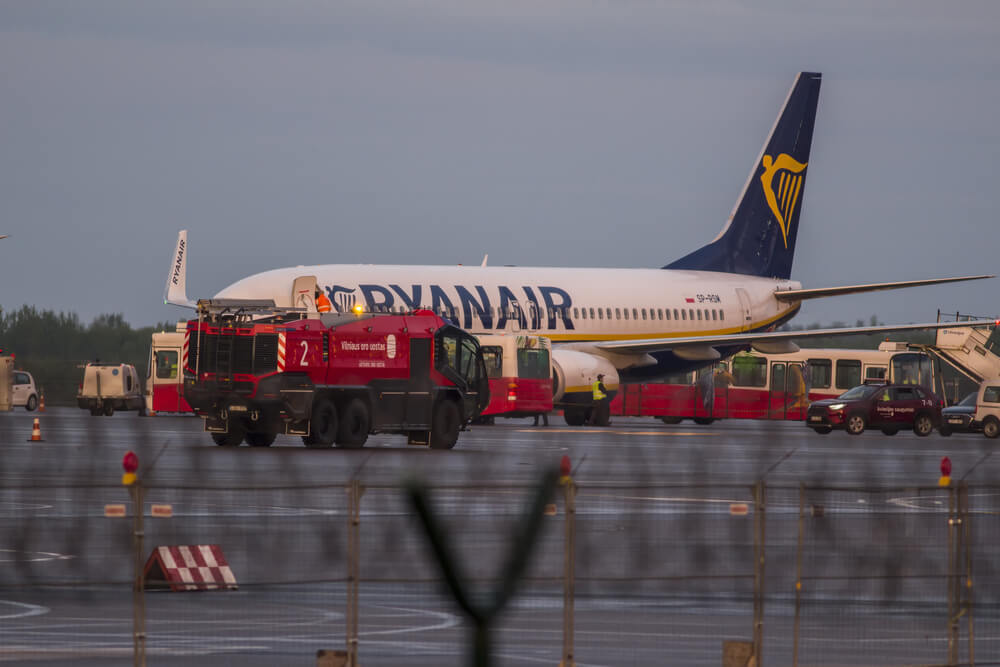 Dispatcher: RYR 1TZ, for your information, we have information from the special services that you have a bomb on board that may be detonated over Vilnius.

Pilot: I understand you.

Dispatcher: For safety reasons, we recommend that you land at UMMS [Minsk National Airport in ICAO terminology].

Pilot: The bomb report ... where did the message come from? Where did you get information about this?

Pilot: Understood, the security service at Vilnius airport or from Greece?

Dispatcher: This letter was sent to several airports.

Pilot: Again, where did this recommendation to redirect to Minsk come from? Who did she come from? From company? Did it come from the management of the airport of departure or airport of arrival?

Dispatcher: These are our recommendations.

Dispatcher: Inform about passengers on board and the presence of dangerous goods on board.

Pilot: There are no dangerous goods <…> There are 133 people on board.

Due to the detention of opposition leader Roman Protasevich after the emergency landing of the Ryanair liner in Minsk, the EU countries called on European airlines to stop flights over Belarus, reports DW.

After the incident with the airliner of the Irish airline Ryanair, which was forced to land at the Minsk airport under pressure from the Belarusian authorities, European airlines refuse to use the Belarusian airspace. Such a step was announced on Tuesday, May 25, by, among others, the French Air France, Finnish Finnair, Dutch KLM, Polish LOT, Austrian Airlines and Singapore Airlines.

Earlier, a similar decision was announced by German Lufthansa, Scandinavian SAS, Latvian AirBaltic and Hungarian Wizz Air. Airlines Finnair and Air France explained that the measure will be valid indefinitely, "until new instructions are received." Finnair indicated on Twitter that the refusal to use the Belarusian airspace was recommended by the national transport agency Traficom and would lead to some flights taking longer.

Bans for flights from Belarus

The British authorities have issued an order according to which British airlines should avoid the airspace of Belarus. Great Britain and France also suspended the permission for flights of the Belarusian state-owned airline Belavia, and Lithuania stopped accepting planes arriving from Belarus or flying over it.

The Cabinet of Ministers of Ukraine decided to stop air traffic between Ukraine and Belarus from May 26 and banned flights over the Belarusian territory, writes “Ukrainian truth”.

“From 00:00 on May 26, Ukraine stops air traffic with Belarus. Just at an extraordinary meeting, the government instructed the Ministry of Infrastructure, the State Aviation Administration and the State Enterprise “UkSATSE” to take the necessary measures for this. In addition, Ukrainian airlines and planes will be prohibited from flying in the airspace of the Republic of Belarus, ”Prime Minister Denis Shmygal said.

The State Border Guard Service also received an order to stop the registration of passengers traveling from Belarus or to Belarus at the customs points of airports.

On the subject: Leave the country within XNUMX hours: Belarus and Latvia mutually expelled all diplomats

Shmygal stressed: “The situation with the forced landing of the Ryanair aircraft in Minsk is a violation of the Convention on International Civil Aviation. The decision of our government is aimed at ensuring the safety of flights and passengers ”.

The Ministry of Infrastructure clarified that the ban is set for:

The ban is introduced on the basis of Part 4 of Article 10 of the Air Code of Ukraine: “In order to ensure the safety of aviation and society, the authorized body for civil aviation may establish restrictions or prohibitions on the performance of certain actions by aviation entities or oblige them to perform certain actions in accordance with aviation regulations Ukraine ”.

Ryanair unforeseen landing on May 23 in Belarus

On May 23, the Ryanair liner, which was flying from Greece to Lithuania, landed in Minsk after the crew received information about the mining of the aircraft from the Belarusian air traffic controllers. To escort the liner, a MiG-29 fighter of the Belarusian Air Force was raised.

A security check at the Minsk airport did not reveal anything suspicious, and five hours later the liner was allowed to continue its flight. However, the Belarusian security forces detained the co-founder and former editor-in-chief of the Nexta Telegram channel Roman Protasevich and his girlfriend Sofia Sapega, who was on board. A criminal case has been opened against Protasevich in Belarus, he is accused of extremist activity and included in the list of terrorists.

The “seizure” of a civilian liner by the Belarusian authorities became one of the main topics at the EU summit, which took place on May 24 in Brussels. The heads of state and government of the EU countries, in particular, called on the airlines registered in the EU to avoid the airspace of Belarus and instructed the Council of the EU to take measures to close the airspace and airports of the European Union for Belarusian airlines, as well as to "as soon as possible" impose sanctions against persons and organizations from Belarus involved in the incident.

Minsk's actions were harshly condemned not only in the European Union, but also in the United States, Great Britain, NATO and the UN. United States President Joe Biden, in particular, supported the EU's decisions against Minsk and promised that his team would also develop a set of measures to prosecute those responsible for what happened to the Ryanair liner and Roman Protasevich.