Home In the U.S. Torrential rains, floods and tornadoes: Cristobal's record storm hits the US

Storm Cristobal went on land on the Gulf of Mexico, bringing with it strong gusts of wind and heavy rains, writes AccuWeather... This storm promises to break two records at once - in the time of its appearance and in the trajectory of movement through the United States. 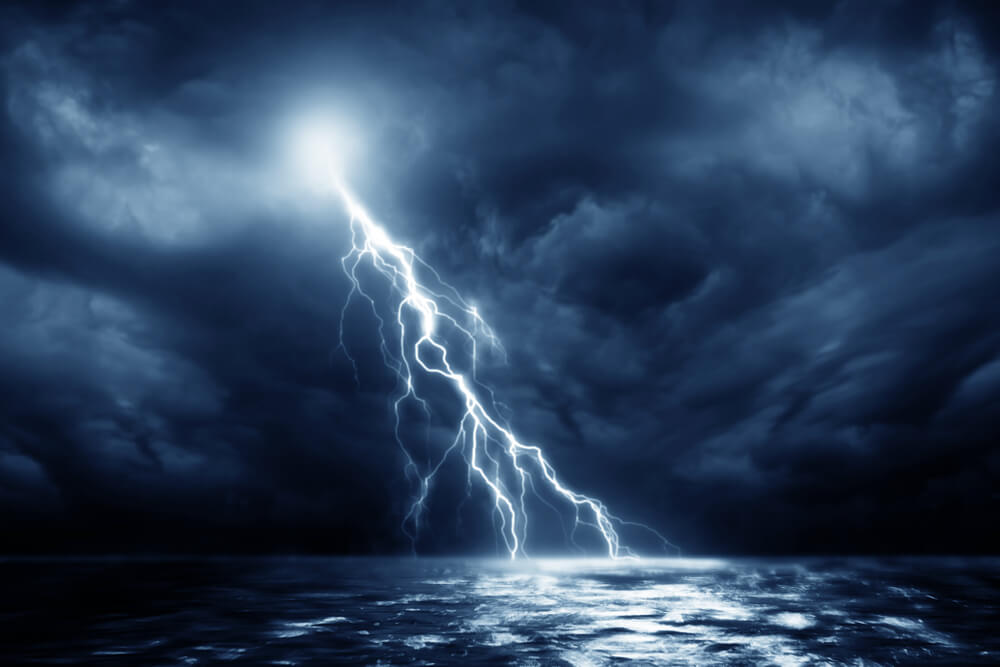 Late in the evening on Sunday, June 7, Cristobal went ashore on the Gulf of Mexico in the form of a tropical storm that hit the coastline of Louisiana with steady winds and gusts at a speed of 50 mph (80 km / h). A storm covered southeast Louisiana, but tropical storm conditions spread along the Mississippi and Alabama coastlines, and heavy rain fell in Panhandle, Florida.

Cristobal regained the status of a tropical storm on Friday, June 5, when he began moving north after heavy rains in southern Mexico and Central America. The storm continued to gain strength, moving through the warm waters of the Gulf of Mexico from Saturday to Sunday (June 6 and 7). Cristobal's center ended up on land between the mouth of the Mississippi River and Grand Isle, Louisiana, about 100 miles (160 km) south of New Orleans at 17:00 p.m. PST on June 7. 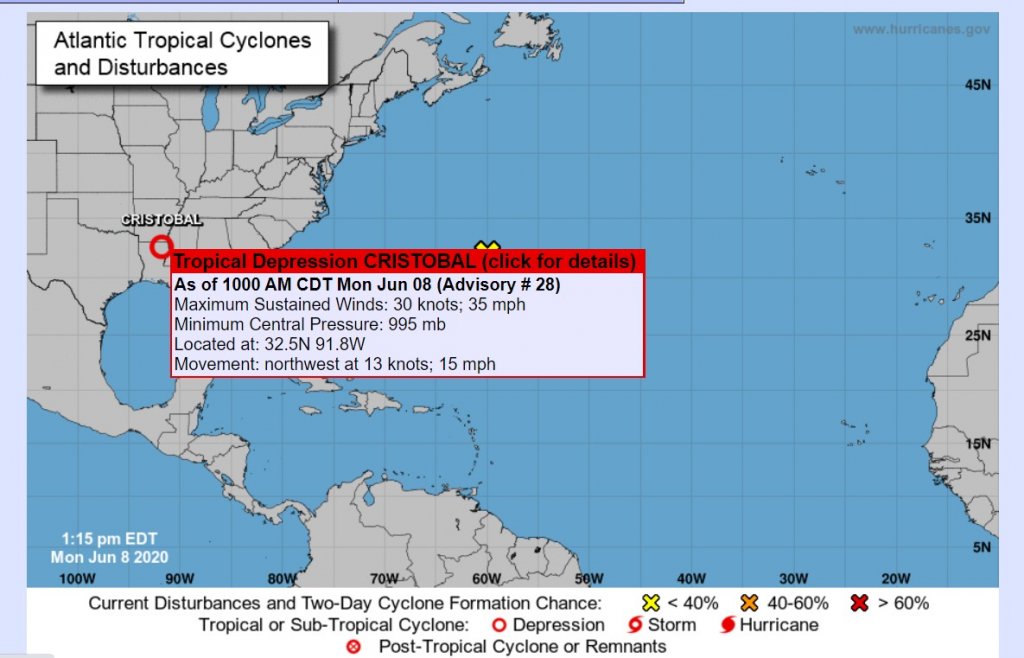 Cristobal is the earliest tropical storm system recorded in the Atlantic Basin. The National Hurricane Center will track the movement of a system that promises to travel much farther across the mainland and even beyond Wisconsin than any other post-tropical system since the mid-1800s.

The storm gradually lost its power over land, weakening to a tropical depression early in the morning on Monday, June 8.

Water from Lake Pontchartrain is splashing up against Lakeshore Drive in New Orleans on Sunday, June 7, 2020, as Tropical Storm Cristobal nears.

Lakeshore Drive is closed due to Tropical Storm Cristobal.

Despite the easing, the risk of isolated tornadoes, floods and local destructive winds will continue throughout the day in the lower Mississippi Valley and the central Gulf of Mexico.

Over the weekend, several tornadoes were recorded in Florida: at this time, external elements of the storm began to affect the state. On Saturday, June 6, one tornado approached downtown Orlando.

On the subject: How to insure home and property from floods in the US

The stormy surf was observed long before Cristobal went ashore. On June 5, off the coast of Louisiana, two brothers, aged 8 and 10, were killed - they were washed away by a wave on the beach in Grand Isle and carried out to sea when Cristobal was already raging in the Gulf of Mexico.

Although deep coastline problems will gradually decrease as Cristobal moves deeper, heavy rains and gusty winds will continue to affect the states along the Gulf of Mexico and the lower Mississippi Valley earlier this week.

On the afternoon of June 7th, 100 employees at Silver Slipper Casino in Hancock County, Mississippi, were evacuated as floods literally trapped them in the building. Rescuers had to wade through 1,5-meter water to ensure the safety of people. Also, a family staying on vacation was rescued from the hotel.

According to Poweroutage.us, around 2 customers in Alabama, Mississippi, and Louisiana affected power outages by 8am on June 20th. 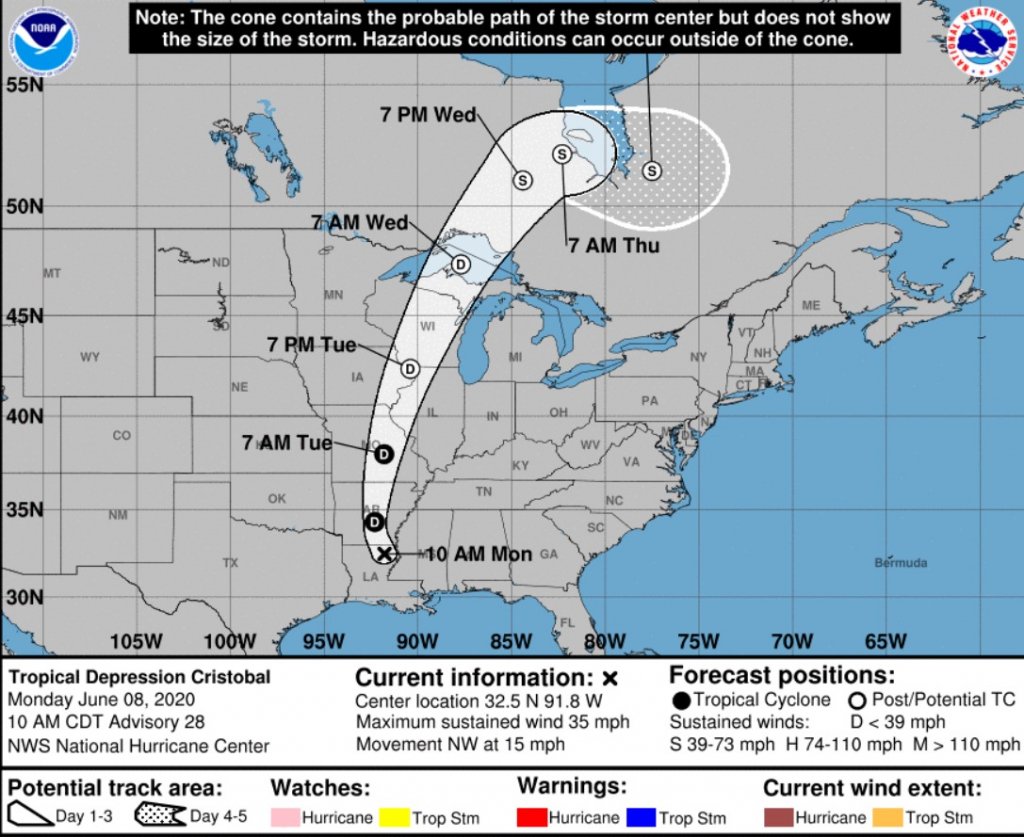 In anticipation of the storm, Louisiana Governor John Bel Edwards asked President Donald Trump to declare an emergency on June 5, just before the storm hit land.

“We are confident that heavy rainfall and coastal flooding will be widespread,” Edwards said in a press release. "I expect urgent protective measures, evacuation and shelter in high-risk areas will be needed ... Currently, due to the dangers associated with the COVID-19 pandemic, shelters must include non-congregated locations."

“We don't expect Cristobal to move as slowly as Storm Barry, with 24 inches (over 60 cm) of rainfall,” said Dan Kottlowski, AccuWeather's chief hurricane expert, referring to the short-lived hurricane that struck the Gulf Coast in July 2019 and caused widespread flooding.

Even at the faster pace of Cristobal than Barry, meteorologists have warned that the amount of rainfall predicted during the storm may be sufficient to cause severe flooding along and east of the storm path. A total rainfall of 6–12 inches (15–30 cm) was designed using AccuWeather systems, with an indicator of 16 inches (over 40 cm) above southeast Louisiana and southern Mississippi.

Flooding can occur even where conditions were rather dry this year. For example, in Mobile, Alabama, 1 inches (6 cm) of rain fell from January 21,50 to June 54,6, or about 76% of the norm. By the evening of June 7, a flash flood warning was issued in the city due to heavy rain in the area.

Winds will remain gusty as Cristobal moves north into the lower Mississippi Valley. Gusts will fluctuate between 30-50 miles (48-80 km / h) per hour with some gusts of up to 60 miles (more than 96 km / h) per hour. 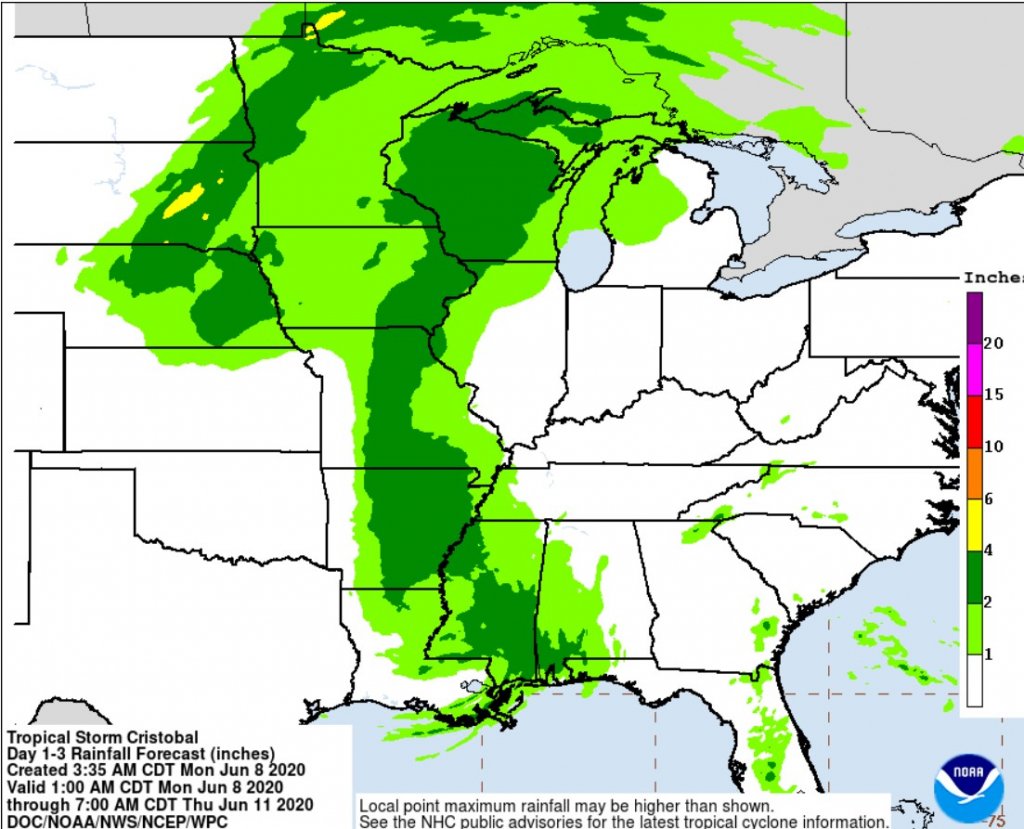 Cristobal is expected to move deep into the Mississippi Valley this week. An area of ​​heavy rain with local flooding is likely, as the storm moves north and turns into tropical rain.

The problems caused by the storm can continue even into the Upper Midwest - flooding rains, severe thunderstorms and gusts of wind as a tropical storm transitions to a continental storm.

In the next two to three days, the threat of flooding will become a serious problem. Flood observations and warnings extend for a thousand miles - from the Gulf Coast to Wisconsin - more than 15 million people will be at risk. CNN.

Strong winds and heavy rain have hit the US Gulf Coast as #StormCristobal made landfall in Louisiana, where floodwaters have partially submerged roads and vehicles.

According to the National Hurricane Center, "Flash floods are possible, as well as new and renewed river floods, especially where there is heavier rainfall — over portions of the Gulf Coast towards the Mississippi River Valley."

The greatest threat to flash floods will be in the next 24 hours (as of the morning of June 8) in the lower Mississippi Valley and in the zone stretching through the Ozark Mountains in Arkansas and Missouri. According to the National Hurricane Center, some of these areas can receive 10 inches (25 cm) of rain, and some up to 15 inches (38 cm). In many cases, rain streaks created by tropical systems will be established in the same area, causing continuous rains for many hours and life-threatening flash floods.

“Internal flooding from hurricanes and tropical storms in the United States has resulted in more deaths over the past 30 years in the United States than from any other threat. While wind speeds and storm surges are important, flash floods due to intense rainfall affect more people and extend over a much larger area, ”CNN meteorologist Brandon Miller told CNN. 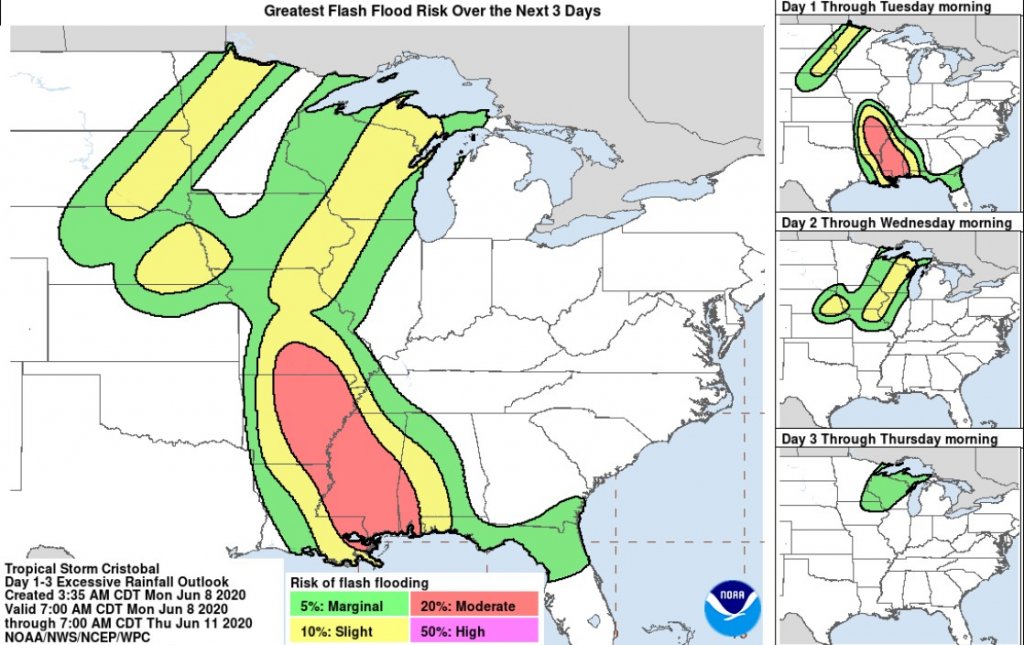 Cristobal will eventually lose its tropical characteristics over the next few days as it interacts with the advancing cold front in the Upper Midwest. However, he will still "remain formidable", say meteorologists.

The hurricane season had just begun on June 1, and the Atlantic had already set a new record. Cristobal became the earliest third recorded tropical storm. It was preceded by Arthur and Berta, who formed before the official start of the season. And soon new threats are possible. AccuWeather predicts a busy tropical season in the Atlantic with 14–20 tropical storms, 7–11 of which can become hurricanes, as well as 4 to 6 major major hurricanes of category 3 or higher.