Home In the U.S. A powerful tornado hit the southern states of the USA: 19 people died, hundreds of houses destroyed

A powerful tornado hit the southern states of the USA: 19 people died, hundreds of houses destroyed

On April 12, Mississippi and Louisiana survived the impact of a deadly storm system, which produced dozens of tornadoes - as a result of the disaster, at least 19 people died, hundreds of homes and buildings were destroyed, writes Fox News. 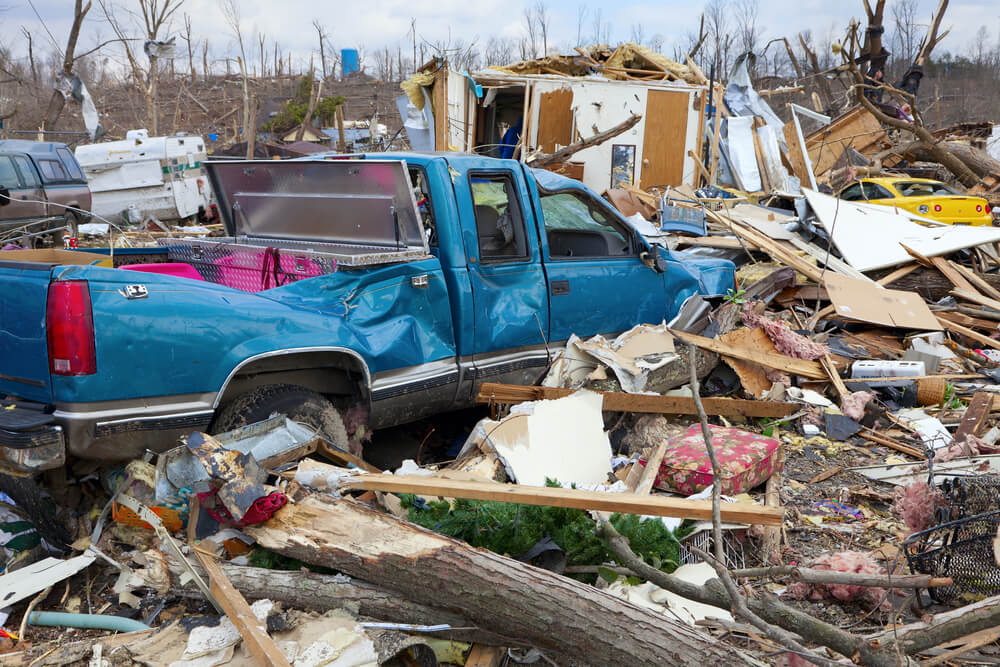 The National Weather Service’s Hurricane Prediction Center (SPC) said severe thunderstorms are moving toward the east coast and natural hazards will spread from southeast Georgia through North and South Carolina to Virginia until Monday evening, April 13.

“We've received over 50 reports of tornadoes in the South and Gulf Coast,” said Janice Dean, senior meteorologist at Fox News. "The Storm Prediction Center said that this particular area could be most affected, including by tornadoes - prolonged, catastrophic tornadoes - and now we are receiving information about numerous deaths."

In addition to tornadoes, there have been numerous reports of powerful hail, devastating winds and flash floods throughout the region.

One of the tornadoes recorded in southern Mississippi passed over 100 miles (160 kilometers) of surface land.

Nothing left of Mama Dee's Cafe just outside of Bassfield, MS where 3 lost their lives. This #Tornado at one point had Doppler radar estimated winds of 170-205 MPH.
A second strong long-track tornado rolled through just to the north just 45 minutes later! #mswx pic.twitter.com/TU73sC6SjX

Warnings about possible tornadoes remain valid in the southeast, and they will appear throughout the day in North and South Carolina and the Middle Atlantic. The strongest storms will leave the east coast by Monday evening, April 13th.

“Unfortunately, we will continue to see damage in parts of North and South Carolina all the way to the Mid Atlantic and northeast,” Dean said. "So the next few hours will be crucial."

On the subject: Rescue Tips: How to Survive a Tornado

The Mississippi Emergency Management Agency said that at least 13 people were killed in the state on the morning of April 11th. According to FOX5, at least 6 deaths were recorded in Georgia. Another 2 bodies were recovered from the rubble of destroyed houses in Arkansas and South Carolina.

“Robert left this world a hero: he defended Mrs. Paula during a tornado,” they wrote in the sheriff's office. "He was a very valuable employee and we will miss him very much."

Powerful tornado rips house from foundation and drops it onto highway in Upson County near Thomaston. Thankfully no one was hurt. Live coverage on channel 2 action news. pic.twitter.com/Y1bPybBn9Z

Mississippi Governor Tate Reeves declared a state of emergency on the evening of April 12 after several tornadoes hit the state.

“Nobody wants to celebrate Easter like this,” Reeves said on Twitter. “As we contemplate death and resurrection this Easter Sunday, we believe that we will all stand together.”

About a million people after the storms were left without electricity, reports poweroutage.us.

Aerial damage and other shots from #Soso, #Mississippi... This was a violent #tornado leaving behind the most striking damage I've seen firsthand since Moore 2013. Check out the swirls in the fallen timber, suggesting intricate subvortex action. Every tree chopped off at about 6 ' pic.twitter.com/0315CyzfSO

Before the storms moved to Mississippi, the weather service reported numerous tornadoes and destructive winds over much of northern Louisiana.

Homes in Ouachita County, Louisiana were “razed to the ground” while families were inside due to COVID-19 quarantine guidelines. Local media reported that officials in the area were forced to find temporary shelter for storm victims in an attempt to protect residents from the virus.

“Because of COVID-19, we don't look at the hideout the way we used to,” said Sean Smiley, a police spokesman in Ouachita. “We are trying to solve this problem and see if we can provide hotel rooms for displaced people. The reason is that we are trying to continue social distancing. "

If y'all could. Please say a prayer for Chattanooga and those affected by Last night tornado pic.twitter.com/ma9YN3EsKB

Mississippi has 2781 confirmed cases of coronavirus and 96 deaths. Louisiana has 20 cases and 595 deaths. The coronavirus has made tornado preparedness difficult, especially for people who have to seek shelter with others.

The only way to slow the spread of the new coronavirus is by self-isolation. The only way to be safe in a tornado is to hide in a sturdy building, often public.

Forecasters and emergency officials in several states have offered guidance on the use of shelters as tornado season approaches in a pandemic. Health officials say the first piece of advice during a tornado amid a pandemic is to "protect yourself."

Jamie Mayo, Mayor of Monroe, Louisiana, said the storm damaged 200-300 homes in and around the city. Flights were canceled at Monroe's regional airport: siding was torn down from buildings, and trash was scattered on the runways. Airport director Ron Phillips said the storm damaged aircraft in the hangar for up to $ 30 million.

Officials reported damage to dozens of homes in northwest Louisiana.

To flush the toilet and bachelor life: 8 of the strangest local taxes in the US

Water, sleep and positive: 20 daily habits of people who rarely get sick

tornado in the USA