Home In the U.S. She offered 'sex in exchange for a position': new charges against Russian woman Butina

She offered 'sex in exchange for a position': new charges against Russian woman Butina

The grand jury confirmed another charge against the Russian woman, Maria Butina, who was arrested in the United States. To the accusation of conspiracy to become a foreign agent was added a clause about real work as a foreign agent without registration, using “sexual relations”.

The accusation of conspiring to work as a foreign agent, which 16 of July brought against the US citizen Maria Butina, who was arrested in the United States, was added, reports RBC with reference to the Politico edition.

DC Attorney Jesse Liu signed an indictment stating that she not only colluded to work as a foreign agent, but that she actually acted as a foreign agent since at least 2015. To achieve her goals, the Russian woman used sexual relations, says “Currently,”On a document submitted to the District of Columbia Court.

The Russian woman used personal relationships as a means for introducing organizations into organizations of interest to Butin and meeting influential politicians, according to the investigation materials.

“During the investigation, the FBI determined that Butina gained access to a wide range of people in the United States who can influence political activities through Person 1. 29-year-old Butina and 56-year-old Persona 1 were allegedly cohabitants and had personal relationships during Butina's actions in the United States, ”the prosecutor’s statement reads.

Butina herself did not take these relationships seriously, but took them as a necessary part of her activities, the investigators suggest.

“At least once, Butina offered another person, not Persona 1, sex in exchange for a position in the organization of interest to her. In addition, in the documents seized by the FBI, Butina complained about life with “Person 1” and wrote with contempt about further cohabitation with “Person 1”. 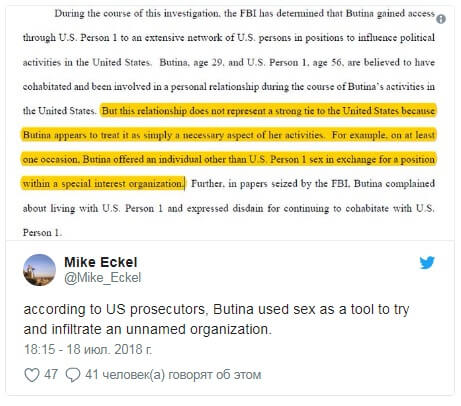 The identity of “Person 1” is not disclosed in the documents submitted to the court. Journalists The Washington Post count them.that this person’s description coincides with Paul Erikson, a Republican functionary from South Dakota. He was well known in the Republican Party after working on Pat Buchanan’s presidential campaign in 1992. In April, she spoke about her affair with a functionary before the Senate Intelligence Committee, people familiar with her testimony told the newspaper.

Erickson was not charged, he did not respond to requests for comment from journalists.

Prosecutors managed to convince the grand jury, who approved the new accusation against the Russians. The maximum penalty for this charge is imprisonment for up to ten years. The first conspiracy charge provided for a five-year sentence.

Robert Driscoll, a lawyer for Butina, issued a statement the day before, disputing the initial charge, and stated that his client, a recent college graduate, did not “seek to influence or undermine any particular policy or law of the United States,” she sought to improve relations between the two countries. ".

The court documents indicate that Butina acted under the leadership of a high-ranking Russian official and tried to arrange meetings with "US residents with influence on American politics, including an organization that promotes gun ownership <...> in order to advance the interests of the Russian Federation." 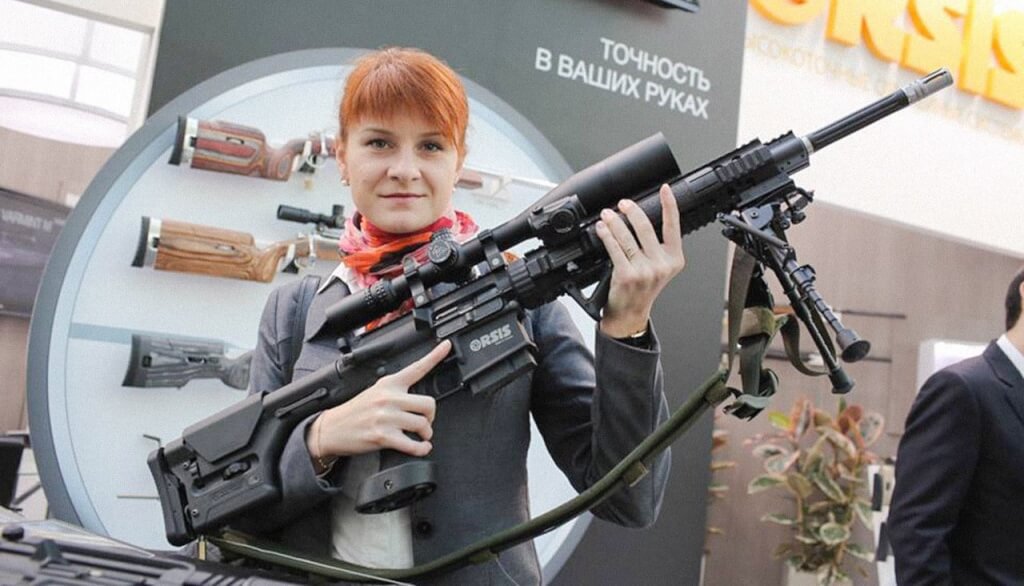 Neither the Russian official nor the organization defending the right to own a weapon is named in the prosecution. However, the publication clarifies that we are talking about the ex-senator Alexander Torshin. Butina worked before his assistant, Reuters reported. She and Torshin are members of the US National Rifle Association. Since 2016, Butina has been residing in the United States on a student visa.

Politico calls Torshin “Assistant to the President of Russia Vladimir Putin” and a longtime supporter of the National Rifle Association, who has connections “with both the Russian special services and representatives of organized crime.”

As previously wrote ForumDaily, in the investigation of Butina took FBI participation, which gained access to her correspondence and the contents of her phone. In conclusion, special agent FBI Kevin Helson, attached to the charges against Butina, is attributed to her complicity in the creation of a secret channel of communication between the elites of the Republican Party and the Russian leadership. Allegedly, while studying at a university in Washington from the year of 2015 to 2017, Butin acted as a Kremlin agent of influence. It is stated that she received instructions from a high-ranking Russian official, whose name is not reported.

Earlier, the Russian Embassy in the United States said it was seeking Washington to provide consular access to Butina. The embassy noted that so far this opportunity has not been given.