Home Page Our people Ukrainians are building an e-sports arena in California: what they will play there

Ukrainians are building an e-sports arena in California: what they will play there

“Dota”, “Counter-Strike”, “Fortnite” are popular video games. They are not only a hobby for teenagers, but also the latest sports. Everything here is just like in football or boxing: teams or individual cyber players go through long training sessions, compete in the arena for prizes, and cry from victories or defeats, says "Voice of America".

During a pandemic, esports is gaining popularity even faster. Companies that organize and broadcast e-sports tournaments on the Internet, earn millions of dollars from advertising, compete for the championship. And one of these companies is the Ukrainian-American Weplay Esports, the founders of which have been living between Kiev and Los Angeles for a year.

“In 2020, a virtual field was added to the sports that humanity had in the past. When the internal combustion engine was invented, the sport of cars was added - Formula 1. The same thing happens in esports. We have one team or one player, the second team or player and the task is to win. Only we don't have grass on the field in football, but grass on the field at Doty, ”says Yuri Lazebnikov, co-founder of the company.

Yuri says that on some days tens of millions of spectators can watch this sport at the same time. Although most views take place online, real arenas are being built for eSports tournaments where teams gather, as well as experts who comment on the game during the break. And Weplay's job is to make those breaks interesting for viewers.

“Most of the companies that are in eSports now are from the gaming industry. We differ from them in that 90 percent of our production is people from television, cinema, theater, ”says Maxim Bilogonov, general producer of the company. 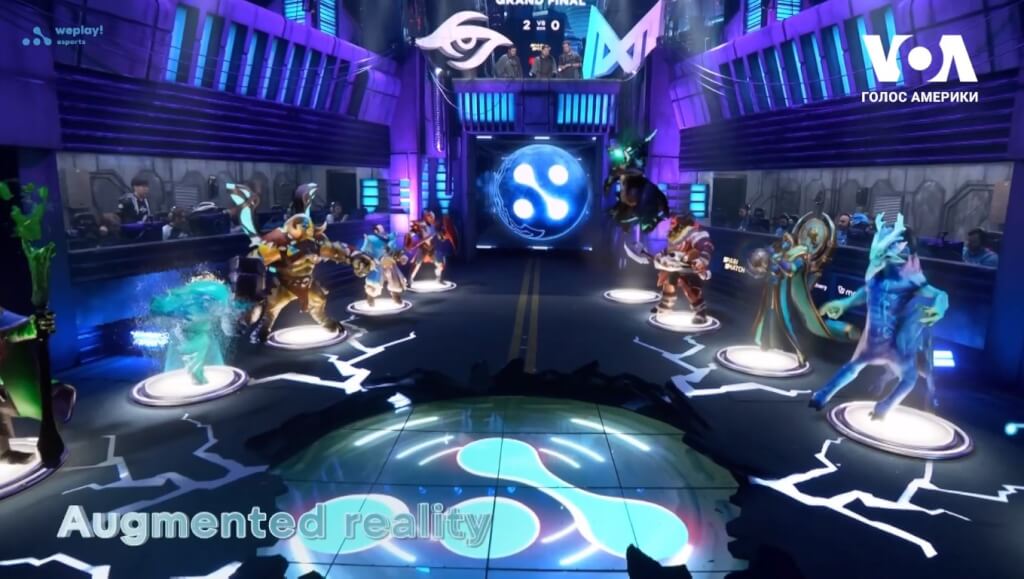 For example, at the international Dota-2 tournament in Bukovel, spectators were shown trembites, and the hosts drank cocoa in Christmas sweaters. Another Dota tournament was held in the style of the Greek gods.

“For example, if a tournament is held on Valentine's Day, we go into the studio, and our commentators, analysts - everyone is lying on a pink sofa in pajamas. If it's James Bond, then the studio is in tuxedos and the band plays jazz, ”says Maxim.

On the subject: First place in the AppStore: how Ukrainians created an application that Ilon Musk uses

The more people watch the game, the more advertisers are interested in broadcasting. So, after the coronavirus, the company began to produce 4 times more content. Esports has become the only sport not affected by the pandemic. A year ago, the company decided to expand its geography and began building an arena in Los Angeles.

“America is one of the largest markets in the world, and the situation is similar for esports. First, when we were choosing how we would locate our central offices, we considered the countries where transparent work would be possible from the point of view of the investor's interests, ”says Oleg Krot, co-founder of the company.

And it all started with one computer club in Troyeshchina.

“I have loved computer games since childhood, at some point people who played the same game began to get together. This was usually in computer clubs. We played all night in a championship that we invented ourselves. That is, it was a group of people who loved games and, thanks to their organizational skills, became the center of the local community and then were able to transform it into business, ”says Oleg.

Now advertisers such as Pepsi and McDonald's are signing deals with them. The founders of the company themselves say: esports has a great future. Yuri Lazebnikov, who built a successful business long ago, still plays video games. Regarding the harm of gaming to humanity, Yuri replies, they say, this is nothing more than a prejudice.

“When a person plays Counter-Strike or Dota, two hours later the same person can take his bike, ball or surf and go outside for a ride, invite a guy or a girl to a movie. And these will be analog things. Just another type of entertainment has been added, and there is nothing wrong with that, ”explains Yuri.

In the near future, the company plans to host tournaments in Latin America, Brazil, China, and Australia. The Los Angeles arena is expected to go live this spring.

Crack in seconds: the most vulnerable passwords of 2020

Fraudsters Send 'IRS Emails' Indistinguishable from Real: What You Need to Know

Aeroflot employees smuggled Apple technology from the US to Russia