Large-scale disaster: wildfire in Washington state destroyed 80% of the city

Nearly all buildings in a small town in eastern Washington state were destroyed in a raging wildfire on September 7, as weather conditions allowed the fires to spread. Writes about it Fox News. 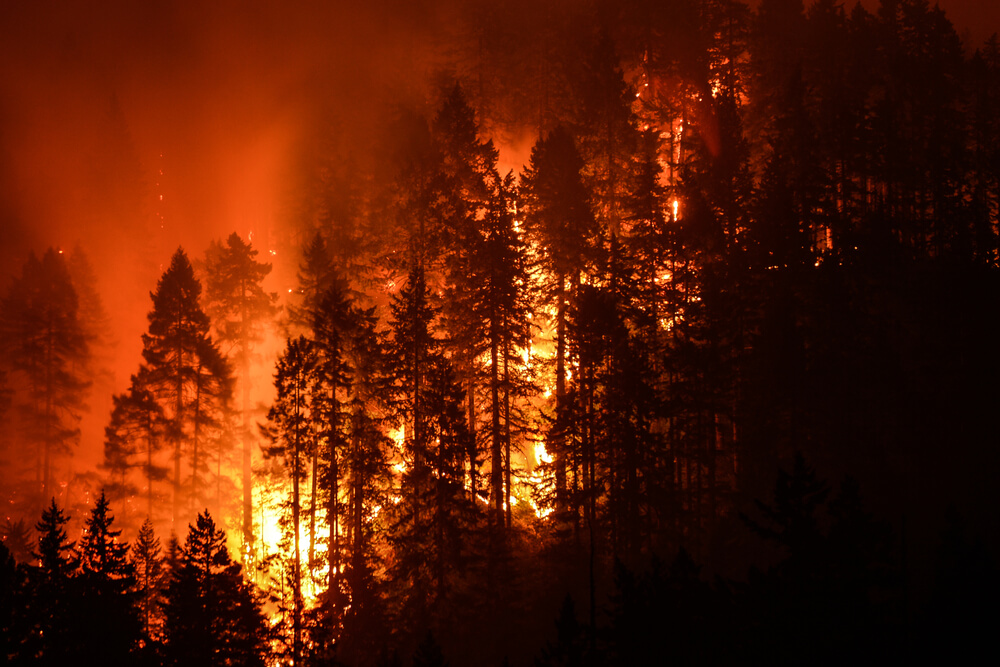 The Whitman County Sheriff's Office said in a press release that the fire, dubbed the Malden Fire, erupted around noon and was caused by "extremely high winds", forest and dry fields that allowed a "firestorm" to develop. Within hours, a fire destroyed 80% of homes and buildings in the small town of Malden, about 35 miles (56,3 km) south of Spokane.

“The magnitude of this disaster is beyond words,” said Whitman County Sheriff Brett Myers in a statement. - The fire will be extinguished, but it will leave an imprint on people's lives. I just hope we don't find that the fire took away more than just houses and buildings. I pray that everyone will evacuate on time. "

As of Tuesday morning, 8 September, no deaths or injuries were reported in Malden.

According to the sheriff's statement, the city has lost its fire department, post office, city hall, library and most of the houses, as well as "other buildings."

Several other major fires were reported around 11:00 AM on Monday, September 7, in Whitman County in the Colfax area, about 32 miles (51,4 km) south of Malden.

“The 45 mph (72,4 km per hour) wind and dry ground ignited the flames at an alarming rate,” the sheriff's office said.

The officers notified all residents of Malden after being notified of the "aggressive nature and direction of the fire" around noon, going door to door and notifying residents of the fire and potential danger to life and property.

The Whitman County Emergency Management Department, the Sheriff's Office and the Fire Department are still working on a plan to take a damage inventory and keep track of residents who were in their homes or communities when the firestorm hit.

Washington State Lands Commissioner Hilary Franz described the state fires as "heartbreaking and surreal" as 300 acres (000 ha) were burned down across the state.

“Many families had to leave their homes and many buildings burned down,” Franz said. "We're still seeing new fires all over the state."

Evans Canyon Fire in southeast Washington has grown to 75 acres (817 ha), according to InciWeb. As of the morning of August 30, it was 682% localized.

About 1000 firefighters were deployed to extinguish the Evans Canyon Fire as the region's fire deteriorated air quality and visibility.

Additional evacuation orders have been issued as the Cold Springs Fire continues to burn in eastern Washington, south of Omak.

In neighboring Oregon, the Lionshead Fire has grown to 18 acres (615 hectares) at just 7 percent, according to InciWeb.

A new fire on Monday night threatened homes in Lane County, and evacuation notices were issued in some areas.

The high and destructive winds that fuel the fires have left over 120 people in the Portland area without electricity. Power was cut off in the Mount Hood area due to being in an area with a high risk of fire.

On the subject: Party worth millions: what threatens a family who accidentally started a forest fire in California

“We are temporarily shutting off electricity for customers in a high-risk fire area near Mount Hood,” Portland General Electric tweeted. “We're doing this to protect lives and property during these wildfires. We will restore electricity as quickly as it is safe. ”

On Monday, September 7, several small fires occurred due to strong winds in the evening. But strong winds also affected the evacuation.

In Multnomah County, authorities said about a dozen people were stuck in cars in the driveway due to felled trees. The authorities said that with the help of residents, they removed several fallen trees blocking the road. No injuries were reported.

Party worth millions: what threatens a family who accidentally started a forest fire in California

15 years after the disaster: why hurricane Katrina was the most destructive in US history