Home Our people Personal experience: come to the US for a tour and ask for asylum 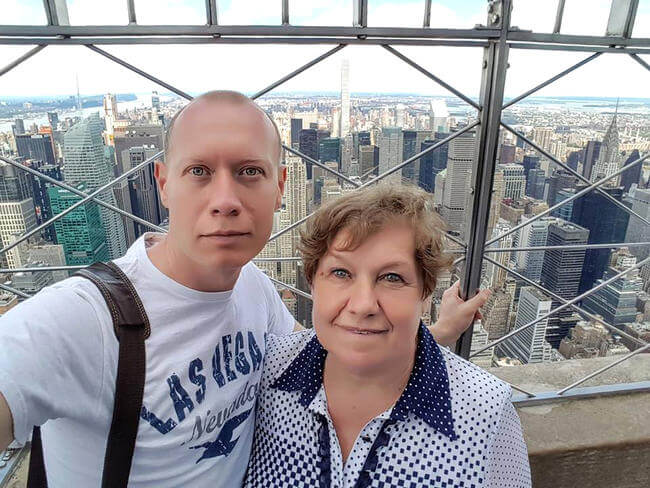 Photos from the personal archive of Alexander Smirnov

In 2016, 3 Russians received US immigrant visas. Nonimmigrant visas - tourist, student, work - were issued 529 times more - 38. Every year, some of the recipients of nonimmigrant visas, going to the United States, decide not to return.

Seller Alexander Smirnov told the publication “Medusa”About how he received refugee status in the USA and settled in a new country.

My life in Russia was fine with me - until the moment when I came out. They began to threaten me in social networks and on the phone, painted my porch. I could come home and see the inscription at my apartment: “The fagot lives here.”

I was asked to resign from the press service of the Deputy Mayor of Moscow for Urban Development Policy and Construction. The boss put pressure on my sense of responsibility - she said that if her boss finds out about my orientation and its public disclosure, everyone will have to quit. I think this would not have happened, but then I wrote a letter of resignation of my own free will. Of course, I was uncomfortable, but when you live like this every day, you perceive it as part of reality.

And then my grandmother died in Blagoveshchensk and left me a little one-apartment Khrushchev. When my mother told me about it, I decided during the day that I would sell it and leave for the USA - my friends already lived there. For me, an 40-year-old person who did not know a single language other than Russian, people were important who would help with adaptation at first, and money — without them, moving would be an adventure I would not have decided at that age.

We did tourist visas with my mother - I already knew that I would never return, so it was important for me that she could fly to me. I was not asked about immigration intentions during an interview at the consulate, but I knew that I would seek asylum. So many refugees do - they enter the country as tourists, and over the next year they try to change their status.

I shot a studio in the Russian-speaking part of Brooklyn, began to learn the language and study the city: my mother and I went to Broadway musicals, celebrated mine and her birthdays, just walked.

It struck me that we were constantly met by polite people. I did not see drunk people on the streets - not near bars, but simply walking along the sidewalk. In Blagoveshchensk, these were in abundance. Yes, the subway was dirtier than in Moscow, but there were more positive moments - I liked New York, and I studied it with great pleasure.

When my mother returned to Russia, I easily found free lawyers: in the US, law firms are committed to helping people who do not have the money to pay for a lawyer. I was helped to prepare and translate a package of documents - evidence that my life in my homeland was really in danger. Such papers help convince the immigration officer to provide asylum, and I had them - a certificate of arrest from a police station where I got after a protest to defend the rights of gays in Russia, notes and media interviews.

I met with representatives of this company about 10 times, during this time we managed to discuss everything: from my childhood years to the last days of my stay in Russia. Lawyers do not like to make predictions, but they said that my chances of getting asylum, and then the green card, are high. The case was ready a year later, we submitted the documents in 2015, and since then I have been waiting for an interview. This is normal - there is a very long queue of those who want to get political asylum. According to forecasts, I’ll go to the immigration officer in December 2017 or January 2018.

I was given a work permit through 9 months after submitting the application. By this time my money was already running out, and I got a job at the store — sorted the nuts. I was paid 9 dollars per hour if I worked 40 hours per week. If he worked overtime, they paid one and a half times more for each “extra” hour. This is very small money for New York, but my salary of the nut sorter was still higher than the salary of the press officer in Moscow.

At the next job I sold fish: I took the goods, cleaned carps and perches. At the present - I sell salads. The store where I work is located not far from Manhattan Beach, most of the buyers are Russian-speaking, but 15-20% are Americans. I speak English with them, my language is enough for that, but no more. Now I regret that, having arrived in the USA, I did not study more closely, but I explain this by the fact that I needed time to recover emotionally. I am going to return to the language courses in January, so far I don’t have enough time for this - I work 55-57 hours a week. Physically, I am tired, of course, but morally - I rest. This is the best team for all my rich work biography. We have guys from Ukraine, Tajikistan, Uzbekistan, we all speak Russian, we like to communicate with each other. Another important point for me: I'm not lying anymore. I don’t tell everyone about my orientation, but I don’t hide it either. If they ask me, I honestly answer that I’m gay, and I’m not inventing ridiculous stories about my girlfriend, divorce, or unhappy love.

I dream to learn a language well, get a green card and go to college. I think I can do social work. And now I am glad to do what I am doing: this year my mother came to visit 4 for a month, and I was able to pay her tickets and show the best Broadway productions. When you sit in the front row, and you see how the main character looks to mom in the eyes - you are proud. Because you are just a seller in a store, but without sacrificing anything you can just live and make your mother happy.

Transgender woman tells why she moved from Russia to the USA