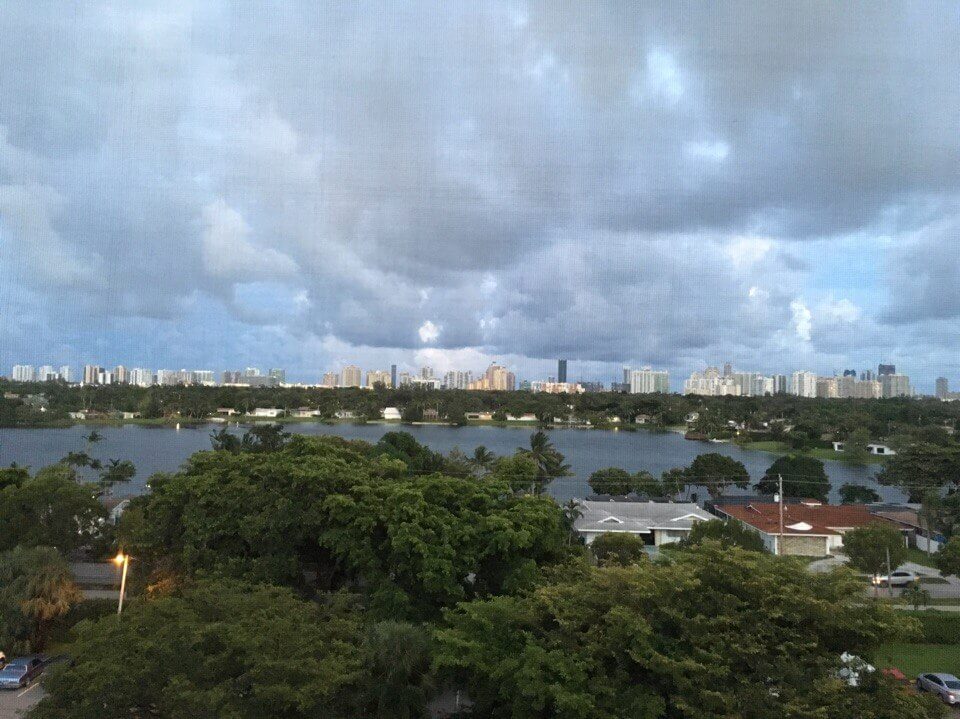 Our family lives in Florida, which recently survived Hurricane Matthew. Before his arrival, we knew - he must pass through Miami with almost maximum force, destroying everything he touches.

Was I scared? Definitely. To a greater extent - because I have a child. There would be no kid - I would even go to photograph the elements.

From the moment we moved to Florida, we saw another hurricane called Eric that passed us by in every sense. We did not attach any importance to it at all: we did not buy water or candles, as the others did. As a result, we did not observe anything except heavy rain.

But the tornado that passed a kilometer from our house in February 2016 frightened me. It was about 7 am. I realized that there was a tornado nearby, because the windows in our apartment were shaking so that it seemed as if they were about to fall out. I took the 2 month old baby out of the crib and, for safety reasons, went with him to the dressing room, which had no windows. Fortunately, the tornado quickly passed and did not cause much damage - only trees were broken and electrical wires were cut off. But the sediment, as they say, remained.

Then I firmly decided to collect an emergency backpack with essentials, which will always be in the dressing room and wait for my high point: the hurricane season in Florida every year from July 1 to November 30, a tsunami may descend suddenly. Who knows what?

Needless to say, I never collected it in the whirlpool of all affairs and only folded it for the first time last week, when it became impossible to ignore the hype about the great and terrible hurricane Matthew.

The hurricane was expected in Florida on Thursday. We had a 1 day to prepare. Many began to prepare much earlier, therefore, on Tuesday, large water stores in the Miami-Dade and Broward district bought fresh water and paper towels, and there was no gasoline at the gas stations. 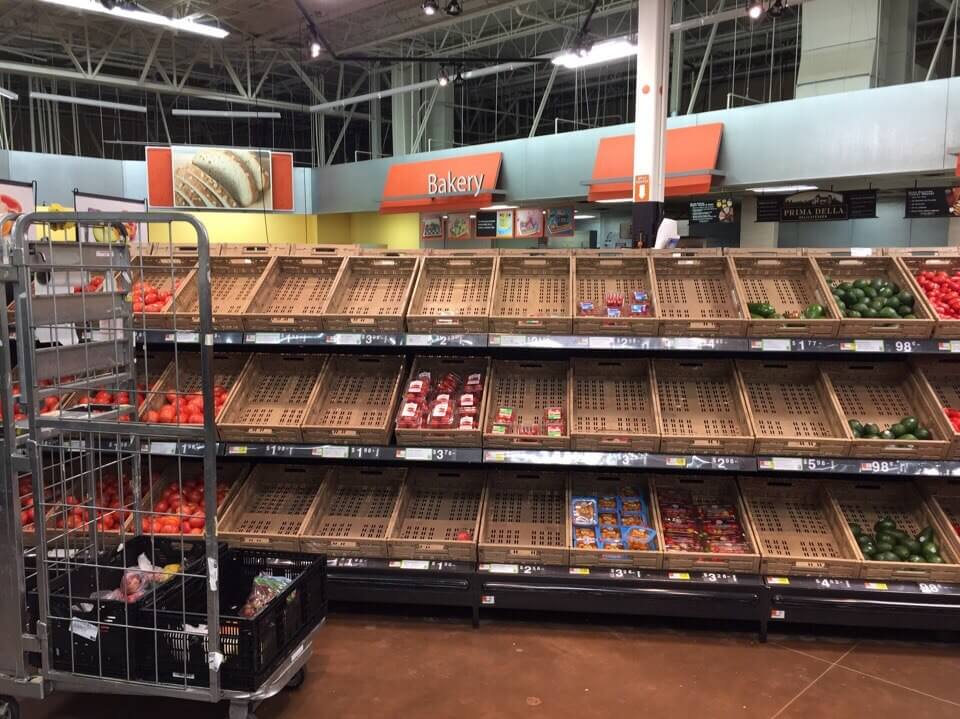 We were not discouraged and went to the store early on Wednesday morning. Fruits and vegetables were bought at the Lorenzo Farmers Market in the North Miami, which didn’t seem to have affected the panic at all - there was a lot of it. Then we went to Walmart, but after seeing the fully clogged parking, we turned around and went to the nearby Publix store. The situation there was no better — long lines, and there was no water on the shelves at all.

From the food they decided to take more baby food (thus, by killing two birds with one stone - you can feed both the child and yourself), canned food, dry snacks, potatoes, pasta and meat for preparing hurricane dishes.

After touring the 5 stores in search of water, we turned into a children's supermarket, where we found large packages of children's purified water. Apparently, few have guessed to look for water in this place.

In the Dollar Tree store, in which everything is sold for $ 1, we purchased flashlights, candles, paper towels, lighters, flashlight batteries, tape for pasting windows.

And in the U-HAUL company they took away several large cardboard boxes for pasting stained glass windows. The fact is that we live in an old high-rise building with thin glass, which, with a strong wind, begin to tremble so much as if in a second they will fly out of window frames. Scotch and cardboard windows would not have saved, but they would reduce the number of fragments.

While my husband stuck the windows crosswise and stuck cardboard, I was engaged in cooking. Most logical to me it seemed to me to make a few side dishes - 1 kg of pasta, 1 kg of boiled buckwheat, mashed potatoes, baked chicken legs and pork chops. These dishes could be divided into portions and eaten for several days in the event of a power outage. In addition, banana bread was baked, a dozen eggs were cooked and soup for the child was cooked.

In order to track the hurricane and not to go to the news on the Internet every second, we downloaded mobile applications that allow you to find out where the hurricane is now and see its intended path of movement. The applications were called Max Tracker and Hurricane Tracker. There are a lot of similar applications in the App Store. Probably, there are more and less convenient than those chosen by us. We have not studied the question. 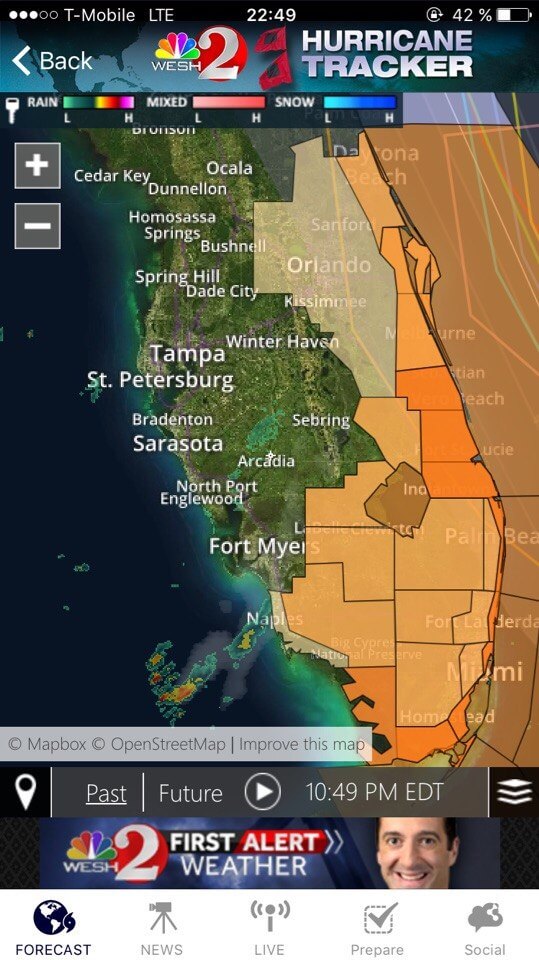 Having put the child to bed, we began to fold a backpack and a small suitcase, if we suddenly had to leave the apartment. The backpack contained all the documents in a waterproof bag, baby food, a knife, warm clothes for the whole family, paper towels, flashlights, tape, lighters, screwdrivers, batteries, wet wipes, and medicines.

We did not forget about the cash that was previously withdrawn from the card, since in the event of a global catastrophe it would be impossible to pay with a card. Also in the backpack we put the battery to charge mobile phones. All the photographic equipment of her husband and valuables were put in the suitcase.

An important point - if you have a child, get an ergo-backpack, in which you can plant a child and run in case of an emergency. So it will be calmer for you and the baby.

On Thursday, we filled the water in all possible containers and, after a swim, filled the bath. A standard bath is considered to hold a 3-day supply of water.

The cloakroom became our safe room, where we would hide from the hurricane. It has no windows, and it is located in the center of the apartment. Two bathrooms have windows and they do not meet safety requirements. Like other rooms.

We removed all valuables to the upper shelves in the dressing room, there was also a suitcase, a backpack, warm blankets and some food.

Judging by the trajectory of the hurricane in the annex, it had to go far from North Miami, “offering” us only heavy rains and wind. What will happen in reality, we did not know and found a place where we should be evacuated in case of trouble. The address has been learned by heart.

Actually, this was how our operational training looked, not including more cardinal actions and expensive purchases like a generator. We did not panic, but we had to prepare ourselves, because we did not know what to expect from Matthew.

At the appointed time - on Thursday afternoon - it began to rain heavily, and we morally prepared for further. Residents of Sunny Isles Beach, which is located right on the ocean, began to shoot video and upload to Facebook. Electricity in our area is not turned off, although I know that in many other light was not.

We waited, but nothing but rain happened. The windows did not shake, the doors did not tear. We ate endlessly, played with the baby, and occasionally listened to the news. It turned out such a festive holiday - all at home with families, a lot of delicious food, the work is not necessary.

Fortunately, in Miami, the hurricane did not meet any expectations, and we were not able to face all the things for which we were preparing. It remains to hope that this will happen every time. 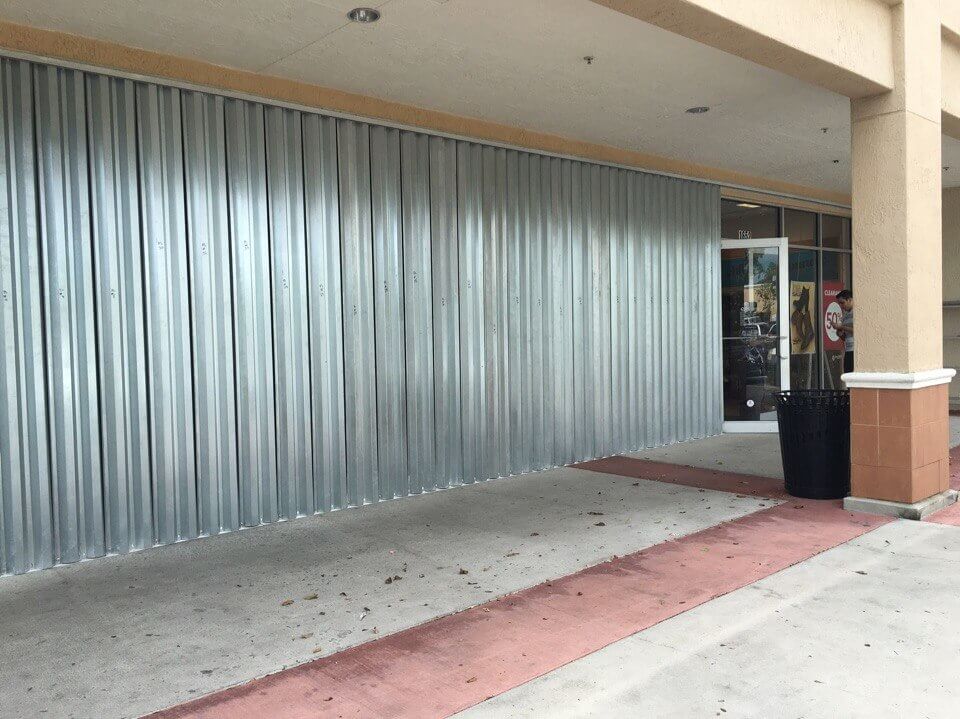 Preparing stores and cafes for a hurricane at Skylake Plaza in North Miami. Photo: from the author's archive

Property Recovery after Hurricane Matthew: What You Need to Know