How to tell fake dollar bills from real ones

If you have a banknote in your hands and you are not sure of its authenticity, there are several ways to learn how to distinguish real money from counterfeit ones. More details about all the methods were told by the publication Wiki how. 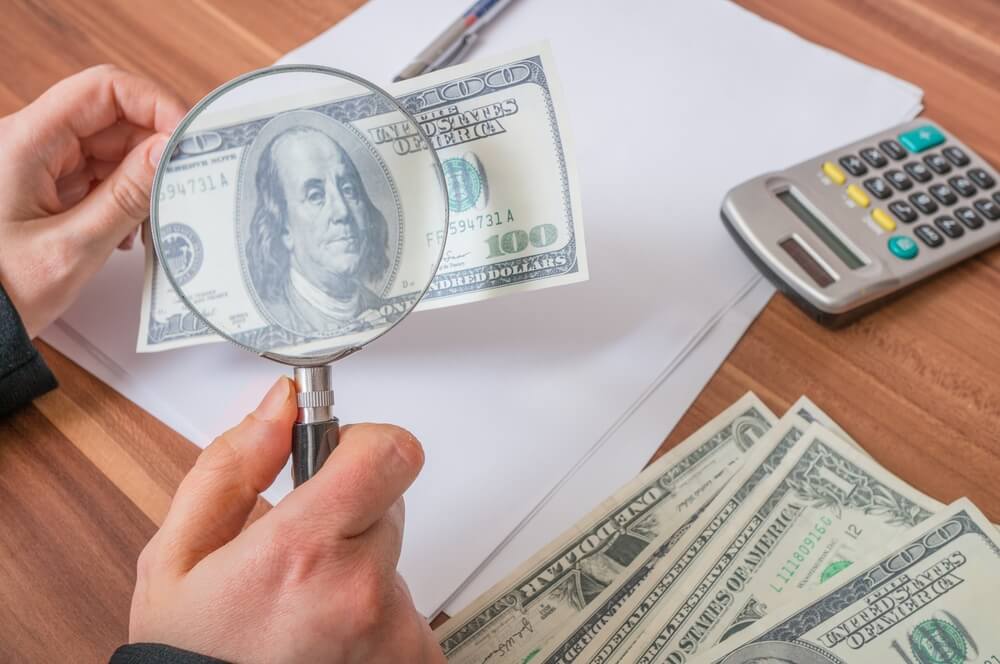 It is illegal to store, produce and use counterfeit money; if the prosecutor proves that you deliberately committed the described acts, then you will receive a considerable sentence. If you come across a counterfeit banknote, report it to the appropriate authorities.

Paper structure The counterfeit bill differs markedly from the material structure of the genuine bill.

Real banknotes are printed on cotton and linen paper. And the fake ones are on cellulose (wood) paper. Real banknote paper does not lose its strength over time, whereas regular paper tears.

In addition, the ink on the original banknote is embossed, which is achieved in the process of intaglio printing. You should feel the bump of the print, especially when you are holding a new dollar bill.

On the subject: A woman will appear on the $ 20 bill instead of President Jackson: who is she

Run your fingernail across the clothes of the person on the bill. You will feel its relief. It's almost impossible to fake it.

Pay attention to the thickness of the notes. Genuine money is thinner than counterfeit money.

The process of printing genuine bills involves high pressure on the paper, which makes real money thinner than counterfeit money.

The only available option for most counterfeiters is to use tissue paper, which can be purchased at most office supply stores. But to the touch, such paper is still much thicker than the one on which real bills are printed.

If you are not sure about the authenticity of a bill, compare it with another genuine one.

All but $ 1 and $ 2 bills have changed at least once since 1990, so it is best to compare the suspect bill with a similar batch or year.

Although the design of the bills has changed, the feel of the paper remains the same as it has been for decades. A bill printed 50 years ago should feel like new to the touch.

Look closely at the print quality. Pay attention to the lack of relief and detail on the fake. Real money is printed using a secret technology that cannot be duplicated, forcing counterfeiters to experiment with printing methods.

This US currency is printed using techniques that are not reproduced by conventional offset or digital printing and are kept secret. It is very difficult to print fine details on fakes, so look for blurriness.

Look for colored fibers. All US bills have tiny red and blue fibers embedded in the paper. Counterfeiters sometimes try to reproduce this protection by printing or drawing fibers on paper, but close inspection reveals that the fibers are printed on the paper rather than being part of it.

Consider the border (frame). In real banknotes, it is clear and continuous.

On Fed and Treasury seals, the sawtooth ends should be sharp and stand out well, whereas on counterfeit money they are blurry and blunt.

Consider a portrait. By the portrait of the person depicted on the bill, you can determine its authenticity.

Portraits on fakes are dull and blurry, while on real dollars they are clear and detailed.

The portrait on the original looks very realistic and stands out against the background of the bill, while in fakes they are often very dark and heterogeneous.

Use a magnifying glass to view the portrait. On one side of the portrait, the microprinted words The United States of America can be seen. To the naked eye, these words merge into a thin line. Such micro-printing cannot be counterfeited.

Check your serial numbers. They are located in two places - on the front side of the bill, on different sides of the portrait. Make sure the serial numbers match.

Note the ink color of the serial numbers and Treasury seal. If they do not match, then the bill is fake.

If you suspect you have multiple counterfeit dollars, make sure the serial numbers are different. For fakes, they can all be the same.

Look at the bill in the light. Look for security features on all bills except the $ 1 and $ 2. Look at the protective strip that goes from top to bottom.

A security strip is added to all bills except $ 1 and $ 2. Moreover, it is embedded, not printed on paper. The stripe is located to the left of the Federal Reserve seal.

If you look at the bill in the light, you will see that the word “USA” is printed on the strip, followed by the denomination of the bills in words for 10- and 20-dollar bills and numbers for 5-, 50- and 100-dollar bills. These stripes are located in different places on bills of different denominations.

The symbols on the strip can be read from both the front and the back of the bill. Moreover, this can be done by looking at the bill through the light.

Place the bill under an ultraviolet lamp. The security strip will glow in a specific color.

If there is no glow, then you have a fake in your hands.

Check the watermark. Look at the bill through the light to see the portrait watermark.

Tilt the bill to check the color-changing ink.

$ 5 bills and lower denomination notes do not yet have this protection. The color changes from green to black, but in the last denominations - from copper (golden-red) to green.

Explore microprinting. It includes words or numbers that are not visible to the naked eye (can only be read with a magnifying glass).

On the subject: Where and how in America can you replace damaged dollar bills?

Microprinting is almost impossible to counterfeit, so counterfeiters do without it. At the same time, if it seemed to you some kind of muddy, then it could also be a fake. Everything is printed clearly and clearly on the original.

Possession, production and use of counterfeit money is a violation of the law; if the prosecutor proves that you deliberately committed the described acts, then you face a considerable prison term.

If you have a counterfeit bill, do not give it to anyone, remember from whom or where you received it and report it to the appropriate authorities, otherwise you may be accused of complicity in counterfeiting.

Remember the person from whom you received the counterfeit money, and his appearance in detail. Also pay attention to the possible accomplices of the perpetrator. If possible, write down their vehicle numbers. Please note that there is a possibility that this person is the same victim as you, and did not know that the bill is counterfeit.

When you find that the money is counterfeit, put it in a secluded place where no one will touch it - this will help keep as much evidence as possible for law enforcement.

Only hand over counterfeit banknotes or coins to authorized police or FSB officers. If asked, provide details of the person who gave you this bill, his alleged accomplices, and any other important information.

There is no reward for surrendering counterfeit dollars. You are simply helping to apprehend the counterfeiters.

The US Central Bank is Run by Private Individuals: How America's Whole Economy ended up in the hands of a wealthy group

Seven Things That Should Be Free, But Are Not

A woman will appear on the $ 20 bill instead of President Jackson: who is she