Home In the U.S. How to motivate children living in the United States to learn and maintain Russian language 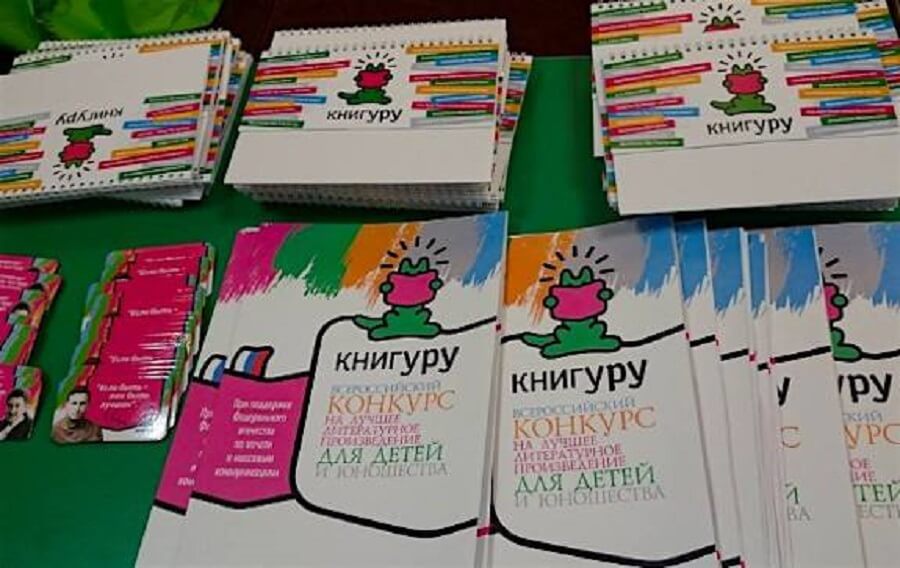 For the first time this year, a literary children's competition "Kniguru" was held in the USA. It was attended by 24 schoolchildren from Russian-speaking families living in different states of the country, including students of the Pushkin School in Manhattan (Pushkin Academy of Russian Heritage), Russian Children Studio in New York and Garden City School in Maryland. According to the terms of the competition, the participants wrote and filmed video reviews of books and stories by winners of the Russian literary prize Kniguru. 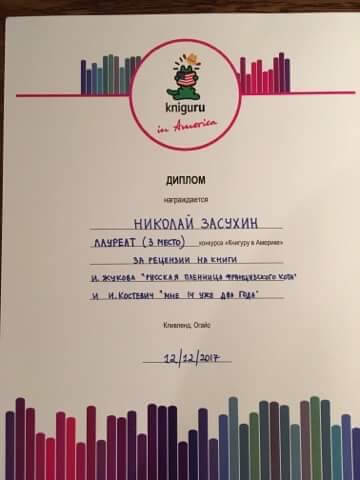 In the "Collective Review" nomination, the winners were 9-year-old Varvara Zasukhina with her mother (Cleveland) for the original review made in the form of a crossword puzzle. 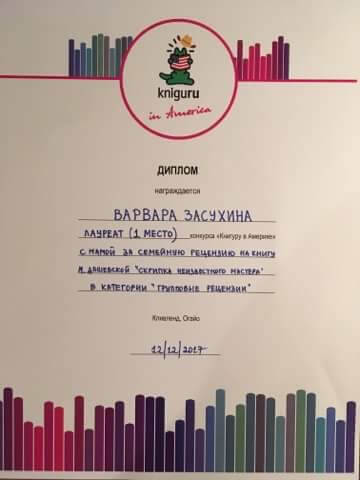 The second place in this category was given to young residents of New York Dasha Genkin (11 years) and Sabine Cherner (10 years) for a video review.

The winners of the “Kniguru in America” competition received laureate diplomas, books with autographs of writers, as well as access codes to the online library Bookmate.

According to the results of the voting, the jury especially noted the active participation in the “Kniguru in America” competition of the Zasukhin family from Cleveland - mother of Victoria and her two youngest children Varvara and Nikolai. 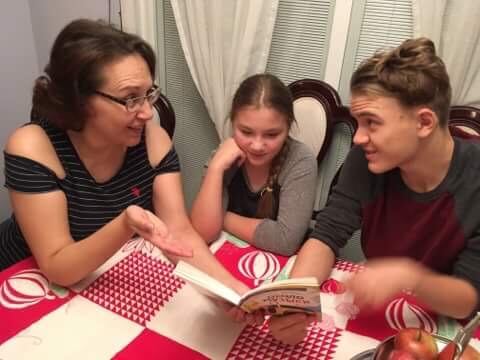 They sent four reviews at once. Natalya Slavina, a journalist and writer, jury member of the “Kniguru in America” competition, spoke with Victoria Zasukhina, a Russian language teacher from Cleveland, about how to motivate children living in the United States to learn and preserve their native language, as well as the differences in language and literature teaching in America and Russia.

- Victoria, both of your children participated in the “Kniguru” competition - 15-year-old Nikolai and 11-year-old Varvara. They are already teenagers, and, probably, studying Russian, reading books in Russian more and more often depends on their mood and mood. Are the children willing to study or do you a favor?

- Honestly, the eldest son has no particular desire, he has a difficult age and, of course, it plays a role. But, in general, I am calm for him - Nikolai will not lose the Russian language, because he already speaks competently, uses cases and gender correctly. He reads quite a lot in Russian, but he really refuses to write. But the youngest daughter, unfortunately, is slowly forgetting the Russian language, cases, written language. I see it and worry, but I am determined - I will definitely deal with punctuation and spelling with her. Moreover, Varvara reads Russian with great pleasure.

- Why is it so important to preserve the language? After all, do you understand that one or two more generations, and your grandchildren, great-grandchildren, if they do not leave for Russia, will be completely assimilated in American society and will no longer remember Russian? And why did you decide to participate in the "Kniguru in America" ​​competition?

- For me, participation in the competition is a tribute to respect, love for Russian literature, my native language. We live here in a foreign country and children must preserve the language, remain native speakers. I myself speak Russian, and I can hardly ever truly adapt to think and think freely in English. The Russian language is my picture of the world, my home, my mentality, a way of thinking. And if my grandchildren think differently, then, of course, I will be very upset. I would like us to be able to think in the same way with them, so that we have a common language house, mentality with them. In addition, high-quality bilingualism and even trilingualism gives great advantages to a person in life.

- Why, in your opinion, is the Russian language disappearing so quickly even in those families where both parents speak it?

- I think the main factor is the English-speaking environment. Children are among Americans, communicate with them and, of course, this determines the desire and ability to speak in English. In addition, it is clear that English is more compact than Russian, it allows you to express an idea as concisely as possible, without resorting to bundles, alliances that Russian abounds in. We say in Russian “I want you to ...”, in English the same phrase is built much easier, and this is important for children. Varvara tells me more and more often that it is easier to read in English and therefore more interesting.

- How can you stimulate children and especially adolescents to take Russian lessons?

- I am sure that the main thing here is a kind, warm attitude. Exercise should not be associated with an unpleasant pastime. In addition, you need to try to create an appropriate language environment. We have Russian language classes every Saturday at the Cleveland City Library. Russian-speaking families with children are gathering, and they speak only Russian, it is forbidden to communicate in English. Children play different games - "The sea is worried", "Stream" and others, they have fun, laugh, and they associate Russian lessons with good company, jokes and a great mood. Therefore, they go to study with pleasure. It is very important to form positive motivation.

Parents who want to keep their children’s native language should not think that it is possible to cope on their own only by speaking Russian in a family. Be sure to need additional classes, and not just with the carrier, namely with a professional teacher who knows the appropriate teaching methods. It is not enough to own the language, it is necessary to know how to present it to children.

- You know how the native language is taught in Russia and how your children learn English in American schools. Is there a significant difference?

- Yes, and it's huge. I get the feeling that there is absolutely no serious scientific approach to language teaching in the American school. In Russia, they provide a powerful linguistic base, access to the history of the language, carry out language analyzes, lexical analysis. Such serious, strong approaches give a person a sense of language, instill literacy at a young age. As a rule, by the eighth grade, Russian children write competently, have cursive writing, and a sense of language. What do I see here? Even American adults write with terrible mistakes. I constantly encounter this, although I am not a native speaker, but the mistakes are obvious. The Russian school makes a person more linguistically literate and instills in him an understanding of the language he speaks.

- How would you rate the teaching of literature here and here?

- In Russia, literature is also given very seriously. These are the bricks, the foundations that the school lays. And what is here? One Shakespeare at best. They themselves do not know their own American authors, what can we say about Tolstoy or Dostoevsky, whom, as we believe, everyone in the world knows? I remember how, in childhood, we enjoyed reading many American authors - Mark Twain, Cooper, O. Henry and many others.
The American school is more superficial in the study of language and literature. But I do not presume to judge. Maybe this is correct? Maybe this is how it should be - to divide already in childhood into humanities and techies, and if you are a techie, then do not go into philology and reading? I do not know the correct answer, but my feeling is that knowledge of the native language and native literature is necessary for a person to become whole as a person, competent and versatile. At least, I really want my children to be just like that.

The second season will take place in the USA in 2018 "Bookmarker in america“, Your children can become its winners. Read books by contemporary authors in Russian, discuss them with your children and write, shoot, create reviews.

This year, participants of the competition wrote reviews of the books of the Booksellers: “Violin of an Unknown Master” and “Near Music” by Nina Dashevskaya, “Time is always good” by Andrey Zhvalevsky and Evgenia Pasternak, “The Cat of Oblivion” by Antonina Malysheva, “Krivolapych” by Stanislav Vostokov , “Russian captive of a French cat” by Igor Zhukov, “I’m 14 for two years now” by Irina Kostevich.

The works were evaluated by a jury composed of:

We are losing it: why do children of immigrants need Russian?

Mother tongue: how to teach a child the Russian language in the USA

How a bilingual child decides which language to speak