Home Page At home A guide in Russia abandoned a group of tourists during a storm on Mount Elbrus: 5 people died

The participants in the ascent to Mount Elbrus (the highest point in Russia) had to be urgently rescued. 5 climbers died, 14 more were successfully found and evacuated. The operation lasted more than 7 hours at an altitude of about 5400 meters, writes with the BBC. 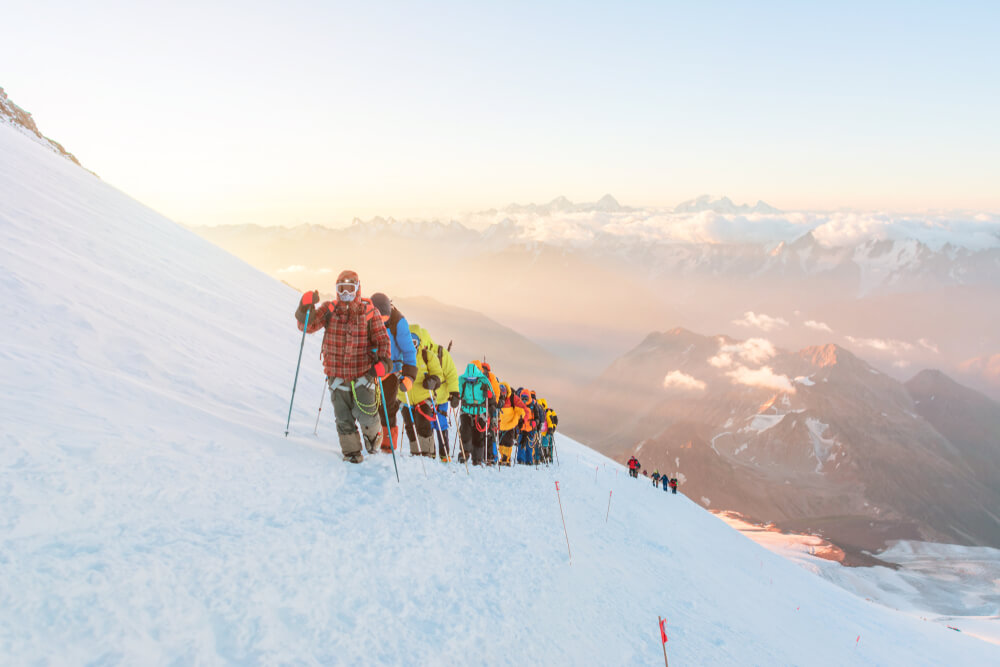 “During the search and rescue operation of a group of climbers on Mount Elbrus, 14 people were saved. They were evacuated to the Azau glade on snow groomers (special tracked vehicles) and handed over to doctors. Unfortunately, five people died, ”the press service of the Ministry of Emergency Situations (EMERCOM) of Russia said.

According to the head of the Main Directorate of the Ministry of Emergency Situations in Kabardino-Balkaria Mikhail Nadezhin, many climbers were injured.

“It is known that almost everyone has severe frostbite. Some of them have limb fractures, ”he stated.

The climbers decided to ask for help only when the weather on the mountain worsened. These climbers came from 11 regions of Russia. A media source clarified that they are all "a little over 30 years old, most of them without experience."

The group was at an altitude of about 5400 meters. The wind speed there reached 40 meters per second, the temperature was below 20 degrees Celsius. Visibility was extremely complicated, which made the rescue operation difficult, according to the Ministry of Emergency Situations in Kabardino-Balkaria. The search was hampered by the fact that the group dispersed, said a representative of the regional Ministry of Emergency Situations.

On the subject: Life before and after Everest: the story of a Ukrainian who climbed to the highest peak of the Earth

The operation involved about 70 rescuers and 16 pieces of equipment. A criminal case was initiated into the death of people under the article on the provision of services that do not meet safety requirements.

The RIA Novosti agency, citing the Ministry of Health of Kabardino-Balkaria, specifies that 11 out of 14 survivors have been hospitalized: two are in intensive care, three are in therapy, three are in the burn department, two are in traumatology, and one is in the department of chest surgery. ... Doctors note that nothing threatens the lives of the victims.

Earlier, a representative of the search and rescue squad said that the group was abandoned by the person accompanying her. “The guide who led the people up the mountain threw them and went downstairs. We met him on the way. Below us were watched by two lights, hoping to save them, "- commented a representative of the detachment.

The organizer of the ascent, Denis Alimov, said that the group was accompanied by four professional climbers who did their best to save people. They registered their route with the Ministry of Emergencies.

According to Alimov, there were initially 20 people in the group: 16 participants in the hike and four guides. When the group set off, “there was a strong wind, but the weather was stable, and there were no delays,” he said.

Alimov said that the problems began when one of the participants in the hike became ill. Then one of the escorts and this girl began to descend to the saddle of Elbrus, and the rest continued their way to the top.

According to Alimov, he learned about what happened next from the guide who accompanied the girl. “Literally half an hour later, the weather worsened sharply, the wind began to blow from the bottom up, a storm began,” he stressed. - Perhaps the pressure dropped sharply, because the girl became worse even with a decrease in altitude. She lost consciousness and died within an hour in the arms of the guide. "

Alimov said that the girl died around 11: 00-12: 00. Then the guide marked the place where her body was with a backpack and began to wait for the rest of the group. Since the participants of the hike did not descend on time, at about 15:00 the organizer of the ascent contacted the camp and began to descend on their own. Then he called the rescuers of the Ministry of Emergency Situations.

As it turned out later, one of those who went to the top broke his leg. At the same time, the weather began to deteriorate sharply.

“Probably because of this, the group lost time, the weather deteriorated catastrophically,” says Alimov.

Then the participants of the campaign decided to split up so that those who can walk faster would not wait for the slower ones.

“They made a decision to divide the group into several units according to the speed of movement,” Alimov explained. “As we descended, two more people died in one of them. But the decision to split up was right, otherwise there could have been more victims. " Two more people have already died in the hospital.

The organizer of the trip said that the guides received severe frostbite and injuries. “One of them was practically blind, he was heavily covered with snow,” said Alimov.

Elbrus is the highest mountain peak in Russia, its height is 5642 meters above sea level.