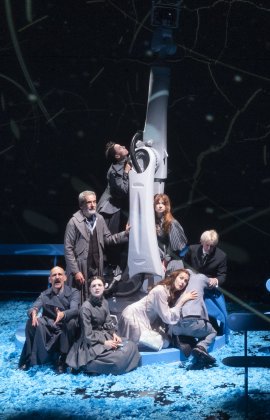 Arlekin Players presents its new experiment - the off-Broadway performance "The Cherry Orchard", staged under the direction of Ukrainian director Igor Golyak. For this production, a four-dimensional universe was created, inhabited by robots, side by side with traditional Chekhov characters, and a Russian soldier who ended up in a “garden”.

Jessica Hecht plays the bankrupt aristocrat Ranevskaya, and Mikhail Baryshnikov plays the elderly servant of Firs and Chekhov himself.

Viewers can choose between watching an immersive production at the Baryshnikov Arts Center (BAC) live or online (via ZOOM).

Performances are held from June 7 to July 3, every day except Monday.

You can buy tickets for link.

Subscribe to ForumDaily on Google News
all events in new york
185 requests in 2,613 seconds.