Home Page loudspeakers The road to America and back: how to endure 10 hours of non-stop flight

The road to America and back: how to endure 10 hours of non-stop flight

Not long ago, I thought about all my flights - when, from where and where I had to travel by air. Behind the dry figures, the statistics are often very difficult, exhausting trips, to which there is no possibility to get used to. A long flight is always a bit of a test if your ticket is in economy class. 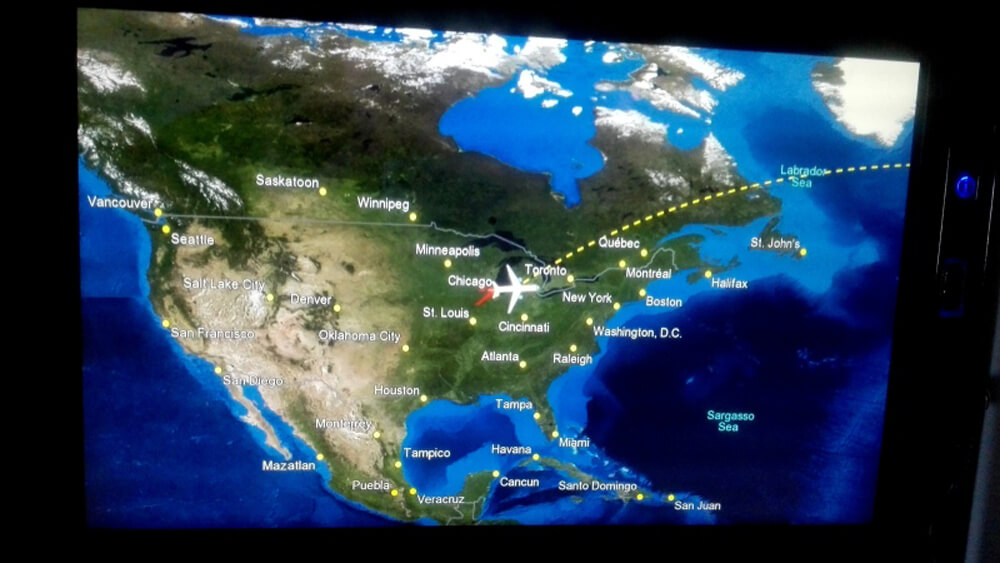 Twice I flew across the ocean in business, but that was the exception to the rule. Usually, I get the cheapest ticket, even without extra legroom (airlines have recently started to tear up unreasonable money for such chairs), and therefore, with my growth, I fully feel all the delights of economy class.

Let's fly with me through the ocean on a Chicago-Vienna flight (duration of 9 hours 40 minutes): I just captured all the stages of the flight.

Chicago is one of the world's largest transportation hubs and has long been the largest in the United States. Today, the local O'Hare Airport is ahead of the rest of the world in terms of some indicators, but in terms of passenger traffic, it is already inferior to Atlanta. However, in any case, you will not often see the airport with 7 (!) Operating runways.

The fifth terminal is designed for international departures. There are few people here at the beginning of the second half of the day, passengers will catch up in the late afternoon, when flights to Latin America go. 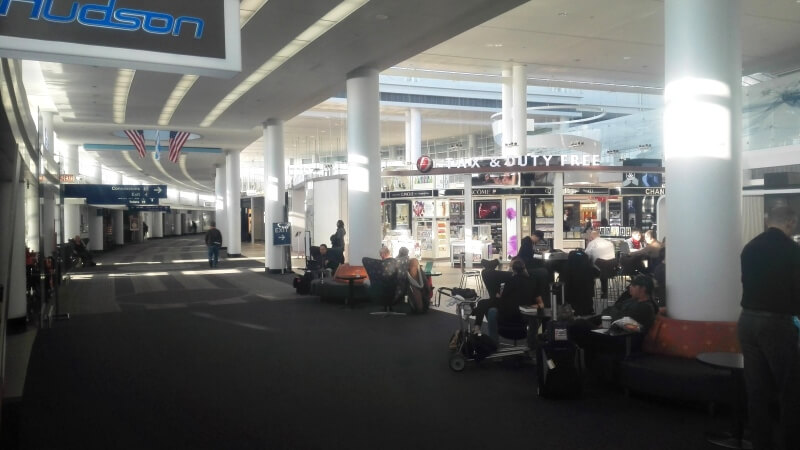 Four hours before departure, I short the time in the bar with a glass of beer for $ 11. America is a rather expensive country.

Finally, the landing is announced. Through the ocean, Austrian Airlines carries on Boeing-767, and yesterday our board took people from New York, before that it visited Beijing and Delhi. The machine works almost nonstop, weekends only for THAT.

I always take a place at the aisle: at night you do not have to wake up your neighbor to go to the toilet, and you can stretch one leg out.

Behind there are a couple of dozens of empty seats, but I don’t have time to take them - the lucky ones who received free rows will be able to get some sleep at night. I have to turn the 10 clock into the media system. 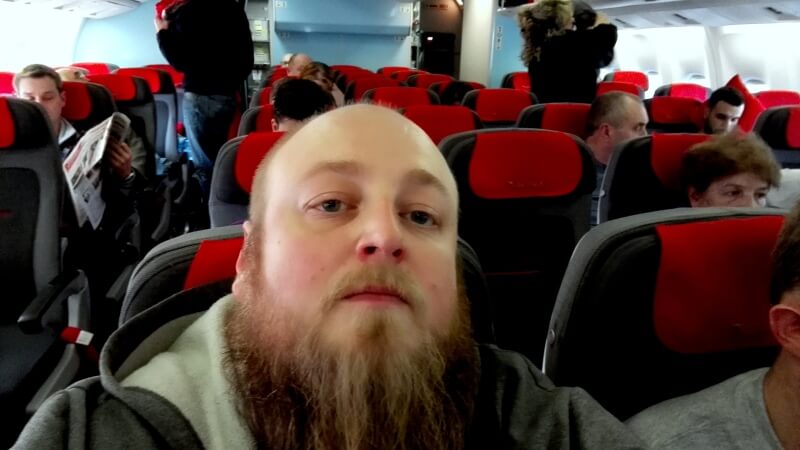 Our journey along an arc will take place in the northern territories of Canada, the Labrador Sea, the southern tip of Greenland, south of the Icelandic island and further over the ocean to Ireland and the United Kingdom. Finally, through Europe to the capital of Austria. Fly long!

After takeoff, they begin to carry drinks. Austrian remains one of the airlines where binge is included in the base fare, so I’m taking a beer. Take two banks at once - life hacking, because they are small and two seem not to be, but flight attendants always make concessions. 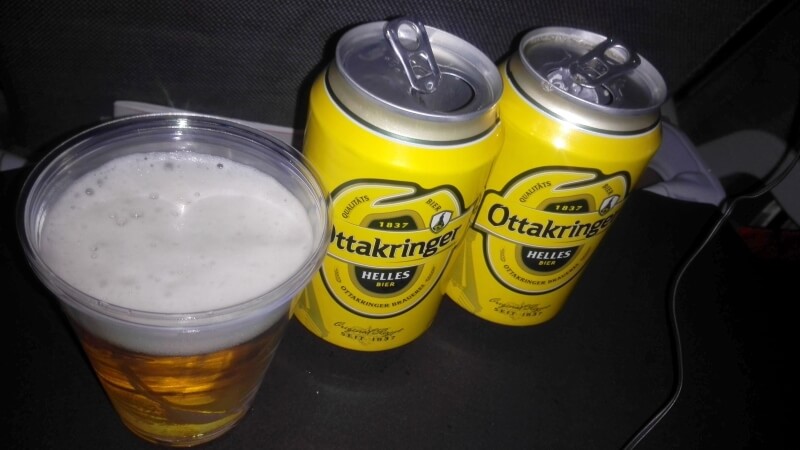 We fly softly, despite the cyclone Juno raging below, leaving the US east without air links. In the system I find the acoustic concert Taylor Swift in Paris. Before dinner there is something to amuse yourself.

About two hours after departure, we cross the border between the United States and Canada and serve food. The choice is modest: some kind of vegan pasta or chicken with mashed potatoes. I will, of course, take the second option. 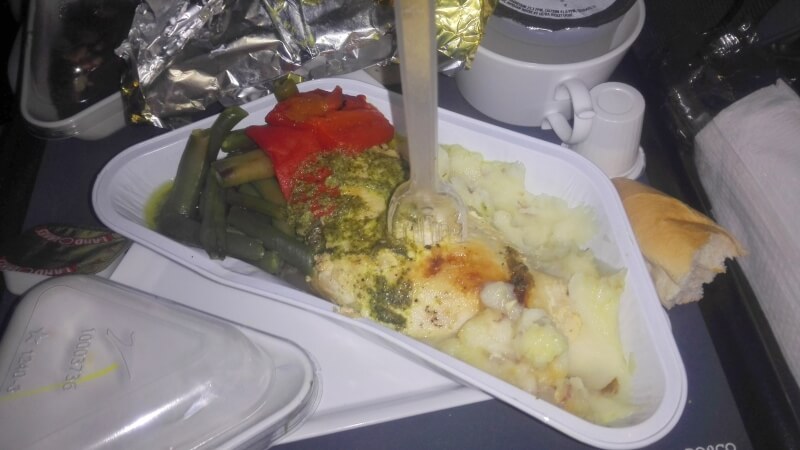 In spite of the fact that for transatlantic flights, the step of chairs is somewhat larger than that of intracontinental, by this time fatigue from the inability to stretch out and relax the muscles begins to be felt. And there is still a long, long way ahead: 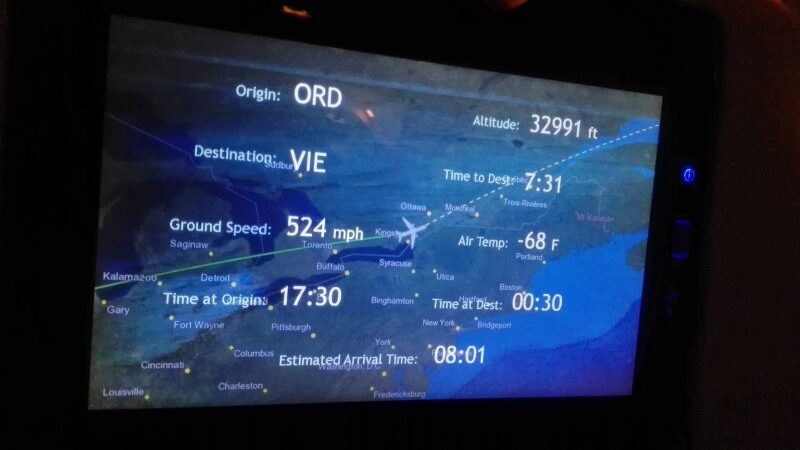 After dinner, I choose for the evening film show "The Expendables 3." I love Wesley Snipes from the time of the cult "Destroyer" (although Sandra Bullock is still better).

Outside the window it's already night, it's time to sleep, but sleep in no one eye. It is good only for those who are located on the back rows or at the emergency exits. For 8 flights across the ocean, I managed only to fall asleep twice - once I was lucky and got a chair with legroom, another sponsor of the trip paid for a business class ticket. To sleep in the economy for me is tantamount to a feat.

Meanwhile, the aircraft picks up speed above 1000 kilometers per hour relative to the surface of the earth (water). This is only possible in flights heading east due to powerful winds blowing at high altitudes. If you fly west, the plane has to overcome their resistance, and therefore the speed is lower.

Is it terrible to fly over the silent water wastelands? There is no difference - that the land below, that water. 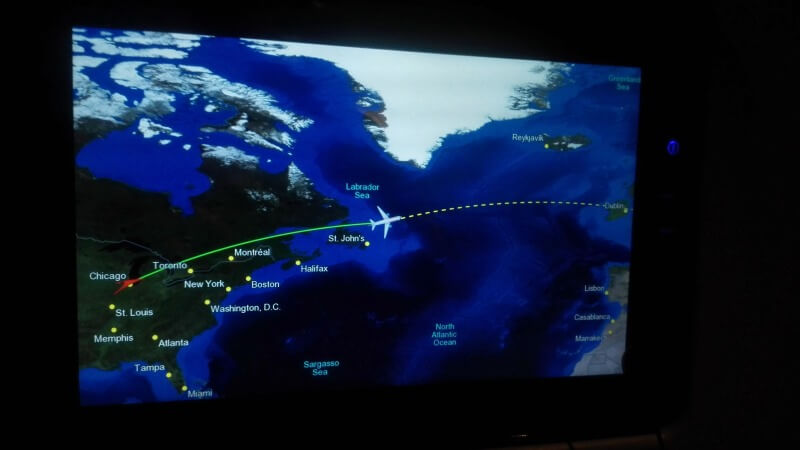 Somewhere over Iceland, the speed rises to 1100 km / h, starts to shake. I do not remember that in this place there was no turbulence: above the island of volcanoes - the main "lullaby" of all cyclones in the Northern Hemisphere.

The night passes without a second sleep. At some point, nothing remains but to devour the flight map with your eyes, mentally bringing a happy ending. But there is one more flight ahead - now to Minsk.

Finally, the captain announces an emergency landing, asks to return the seat backs to the upright position and fasten the straps. The lights go out and after a quarter of an hour the chassis touches the concrete:

This moment - landing after such a long flight - always seems a bit magical, because 10 hours before that literally didn’t happen: the plane buzzed and flew smoothly, and in just half an hour the situation changed dramatically and now the native land.

My eighth flight over the ocean is over! Only no forces remain, and so - joyfully.

Five things you get tired of in America

How much legroom is left to passengers by American airlines

Can you trust the local: what Americans really