Home World 'Down with the USA!': Thousands of protesters set fire to and stormed the American embassy in Iraq

'Down with the USA!': Thousands of protesters set fire to and stormed the American embassy in Iraq

A crowd of people attacked the territory of the US embassy in Baghdad - the Iraqis smashed the gates, broke into the building and started a fire, writes Fox News.

Reporters at the scene saw flames rising from the complex and at least three American soldiers on the roof of the embassy. The embassy was evacuated, but it is unclear whether the staff remained inside.

Hundreds of Iraqis tried to storm the complex earlier that day after the funeral of 25 Iranian-backed Shiite police killed in a U.S. strike on Sunday. Reporters described the erratic scene on the spot and reported that the crowd shouted: “Down, down with the USA!”

On the subject: How a Russian-speaking immigrant went through Iraq and Afghanistan and became a special forces police in the USA

Two Iraqi Foreign Ministry officials told Reuters that the ambassador and US officials were evacuated. The man in the loudspeaker convinced the crowd not to enter the building, saying: "We heard you."

The gates that were broken were a side entrance. The protesters were able to break a few meters into the corridor leading to the main building, but still remained about 200 yards (about 180 meters) from it. They raised the yellow flags of the police and mocked the embassy security officers. Red graffiti in support of Hezbollah Kataib read: "Closed in the name of resistance."

Senator Marco Rubio tweeted that Iran is directly responsible for organizing the attack. The Pentagon and the State Department did not comment on what happened. On social networks, U.S. President Donald Trump spoke out, also blaming Iran.

“They [the Iranian authorities] will be fully responsible. We also expect Iraq to use its forces to protect the embassy, ​​which we have notified about, ”he wrote. 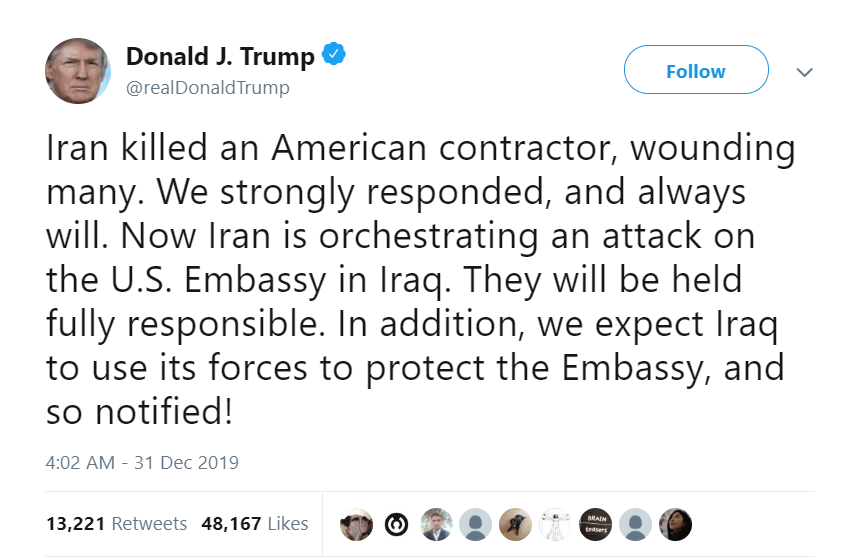 The report said the guards were retreating inside the embassy when protesters threw water bottles and smashed security cameras.

The US military conducted a series of airstrikes in Iraq and Syria on Sunday - after an Iraqi missile strike killed an American contractor and injured several soldiers.

US Secretary of State Mike Pompeo said the United States will not tolerate Iran’s actions that threaten the lives of Americans.

The Iraqi leadership said that US diplomatic representatives are safe. They passed such information to US Secretary of State Mike Pompeo, they write "News".

“Both Abdul-Mahdi (Acting Prime Minister of Iraq. - Ed.) And President Salih assured the secretary that they take responsibility [for diplomats] seriously and will guarantee the safety of US personnel and property,” said State Department spokeswoman Morgan Ortegus.

On the subject: US imposes new sanctions against Russia over Syria

“We are deploying additional forces to support our staff at the embassy,” the statement said.

Esper also called on the Iraqi authorities to fulfill their obligations to protect American employees.

“We didn’t know what we were getting into”: secret documents published about the failure of the United States in Afghanistan

Nephew of the ambassador to Iran and opponent of the annexation of Crimea: what is known about the new after the USA in Russia

Countries that the Department of State considers dangerous for Americans: Ukraine and Russia are on the list