Home In the U.S. Four days of horror: the story of the rescue of a tourist in the California desert

Four days of horror: the story of the rescue of a tourist in the California desert

New Zealand tourist Claire Nelson could not even imagine that, going on a walk through the national park of the United States Joshua Three, she would become the heroine of one of the most horrifying survival stories far from civilization. Her story of salvation tells Air force.

Nothing foreshadowed trouble until the moment when, having slipped, she fell from a large boulder and injured her thigh so that she was actually immobilized. When all this happened, she was alone under the scorching sun in the middle of the desert.

Claire is a New Zealander, but recently lives in Toronto, where she moved after living in London for a while. When friends invited Claire to stay at their house, which is located near Joshua Tree Park, and to look after the cat for several weeks while they were away, she happily agreed.

Claire Nelson had been to this park before and loved this wilderness, reminiscent of a real desert - with trees and cacti, "like in the books of Dr. Seuss."

Early in the morning she went to the park to take a six-hour walk. She took with her several liters of water, trekking sticks and sunscreen.

“I felt as if I was now exactly where I would like to be most of all,” Claire told the BBC.

At 8:30 am, Claire spoke to the Park Information Center staff for details on the route. They told her that this route is not very difficult and the trail is in excellent condition.

Claire walked along the path about three kilometers, but then she realized that she could not find a marker with the mark of the distance traveled, which should be on the path.

She decided to stop and rest on one of the huge boulders, and at the same time deal with the route. 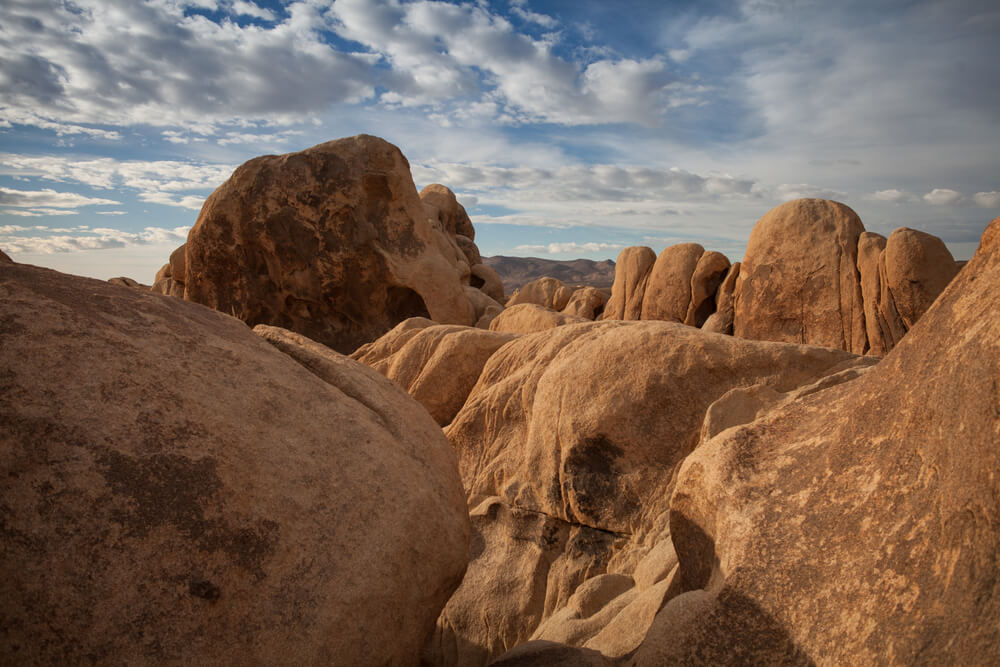 “It all happened at the moment when I tried to get off the stone. I climbed quite high and it was so slippery that I immediately flew down, ”says Claire.

“I understood that there was nothing I could do to slow down. Everything was like in slow motion. The only thing in my head was: no, no, no ... ”, - she recalls.

“I fell to the sound of a strong crunch and my whole body ached. The first thought was: this is bad, ”she says.

Claire fell on her left side, smashing the pelvic bone. She tried to get up, but could not move. She tried to call the rescuers, but the phone was out of range of the cellular network.

“I never imagined that I would find myself in such a situation - not because I considered myself an experienced traveler - it just seemed to me that such an extreme scenario could not happen in real life - at least not with me. I quite often go hiking, and it seemed to me that I adequately assess the situation and the dangers, but then I realized how stupid I was, ”says Claire.

“I thought: I cannot believe that I am here alone, and no one knows where I am. I am traumatized and there is no way for me to call anyone for help. It was a moment of complete and unbearable horror, ”says Claire.

“At first I panicked,” says Claire. But then she quickly switched to solving pressing issues: she needed to cope with pain, shelter from the sun and save as much water as possible in order to survive.

“I just knew that the only thing I could control was how long I could hold out like that,” says Claire.

Claire took the aspirin she had in her pocket to reduce the pain in her broken thigh.

With the help of a trekking stick and plastic bags, she built herself some sort of shelter from the sun. When the water ended the next day, she began to drink her own urine to survive. 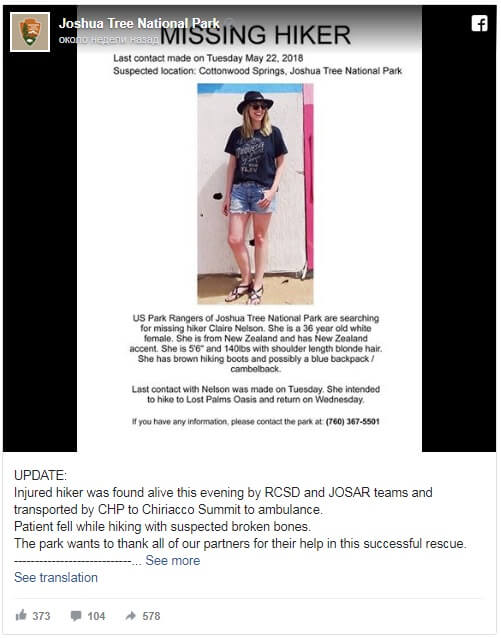 “After I fell off the rock, I shot short videos so that I could explain what happened to me when they found me. I haven't watched them yet. And I'm not sure if I want to watch them, ”says Claire.

“Some thoughts were constantly spinning in my head, and it helped me not to give up. For example, I thought: I want to see this person again. I want to try some of the food again. I want to go there again. And the thought that my loved ones would find my lifeless body in the desert was unacceptable, I could not do that to them, ”says the traveler.

Claire Nelson spent four days and three nights in the desert. According to her, to make the time go faster, she divided the day into several “parts”: in the morning she tried to scream and call for help, in the afternoon she had to hide from the sun so as not to get heatstroke.

“I only saw the kestrels circling menacingly above me, feeling the closeness of death,” says Claire.

“When night fell, I was desperate - because no one came all day. On the fourth day, it was already hot, and I tried to gather strength, but already began to lose all hope. I fell asleep, then woke up with the thought: how long can I last this way, ”- says Claire.

Closer to the evening, Claire heard the sound of a flying helicopter. She thought it was a hallucination.

“Then I heard them calling my name: Claire, we are looking for you. I was lying on my back on a small round boulder and they could not see me. I shouted as best I could, but they did not hear. ”

She made something like a stuffed animal from a stick and her own "cover" from the sun and began to swing it with all her remaining strength.

Her efforts were rewarded - the rescuers noticed her.

“They said that they were used to finding people in an extremely deplorable state, and here I - laughing - beside myself with happiness that they found me. They were very surprised, ”says Claire.

Now Claire is undergoing treatment in the United States. According to the traveler, she is very pleased with the work of doctors, but there are difficulties in connection with payment procedures. Medical services in the US are expensive, and it is rather difficult for a foreign woman to understand the existing system of medical services.

“The care I get in the hospital is amazing, but there is a lot that I don't understand. When the checks for payment come, I can't even imagine how much they will be indicated, ”explains Claire.

Claire's friends created a social media page to raise money to cover the steadily rising costs of her treatment.

“I was absolutely shocked by the number of messages with words of encouragement,” says Claire.

Now Claire is undergoing physiotherapy and, in her words, is learning to walk again. She is looking forward to the moment when she can do everything herself again.

Six ways to cut your medical bill in the US