Home Educational program Amazon is selling a stun bracelet that will wean away bad habits. VIDEO

Amazon is selling a stun bracelet that will wean away bad habits. VIDEO

Amazon is selling an innovative bracelet that will shock you when you eat too much fast food, bite your nails, or sit on the internet for too long. The electronic bracelet, according to the manufacturer, is designed to get rid of bad habits. Cost new to 199,99 dollars. 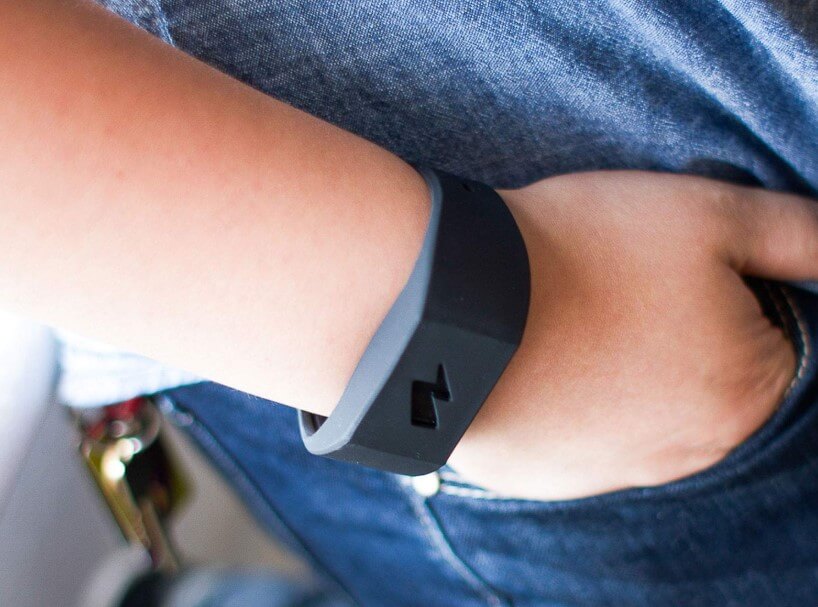 The Pavlok bracelet gives users a kind of "penalty" in the form of an electric shock with an average voltage of 350-volts every time they go beyond what is allowed, writes The Daily Mail.

On the the official website bracelet voltage is indicated as 50-450 volts, current strength - 4 mA. Despite tens and hundreds of volts, everything is quite harmless (for example, tens of thousands of volts in the arc of a standard stun gun for self-defense, but it does not kill a person). The defining value for safety is the current strength. As reported Wikipedia, the minimum perceptible alternating current is about 0,6-1,5 mA and 5-7 mA direct current. Lethal is considered to be an alternating current of 100 mA and above, a constant current of 300 mA and above.

Amazon points out that the sensation of being electrocuted is comparable to touching an “electrified doorknob,” but does not recommend its use on children, pets, pregnant women, people with heart disease or pacemakers, or anyone who has had problems. health problems caused by a mild electrical irritant. It is in any case recommended to consult a doctor before use.

On the subject: American woman received burns 2 degree due to the explosion of a Fitbit bracelet 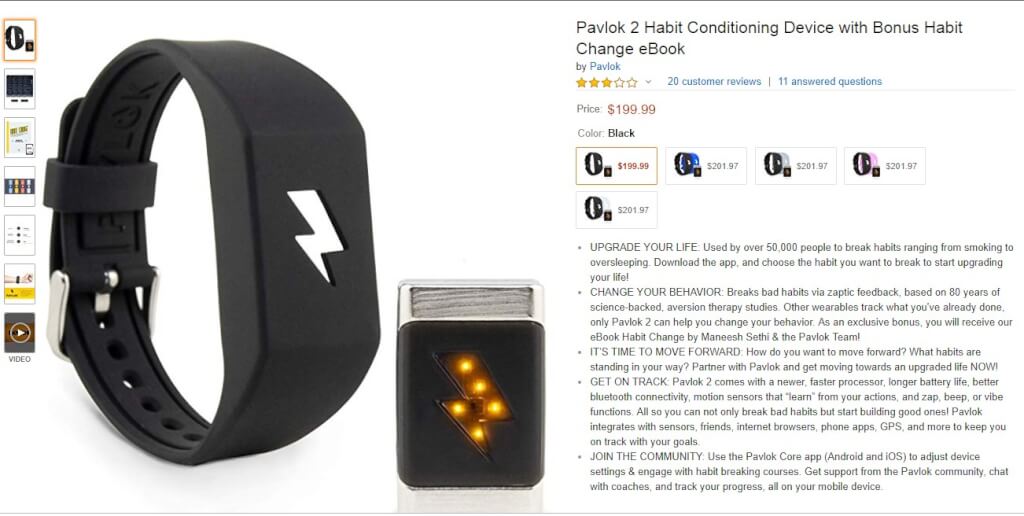 You can buy a novelty in Amazon Online Store (the price is constantly changing, 17 June it amounted to 199,99 dollars)

The Amazon bracelet works for a wide range of unpleasant habits, including smoking, sleeping too long, spending too much time on the Internet, and the like. It is curious that his friends can also “punish” the owner of the bracelet - for example, your friend downloads an application to his smartphone, sees that you are chewing a Big Mac, and gives the bracelet a command to shock you for this offense. 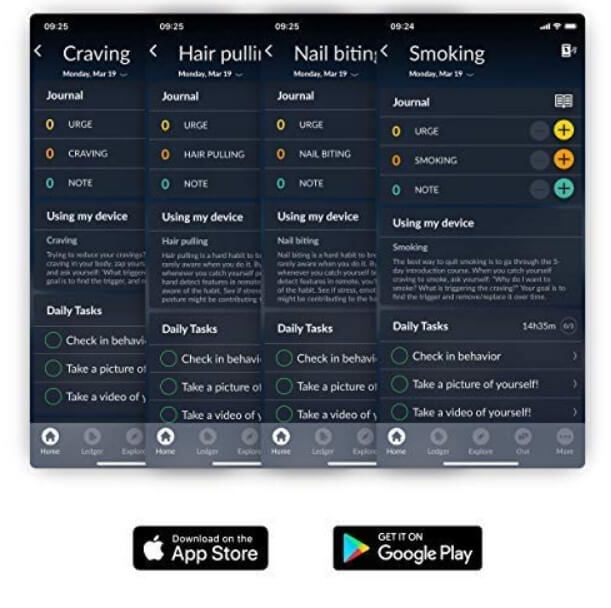 The company claims that “within 3-5 days” you will begin to notice that your addiction will decrease significantly if it does not disappear completely. The point is to fix and fix the unpleasant sensation associated with the bad habit, so that the brain automatically begins to perceive this process as something that it does not want.

The charge is designed for 150 strikes, so it all depends on how vigorously you take to break the rules.

Inventor Manish Sethi says that, despite the fact that this electric shock cannot be compared to the impact of a stun gun, it is sufficiently noticeable that you jump a little or at least react.

The idea was born as a result of Sethi’s own dependence on social networks. 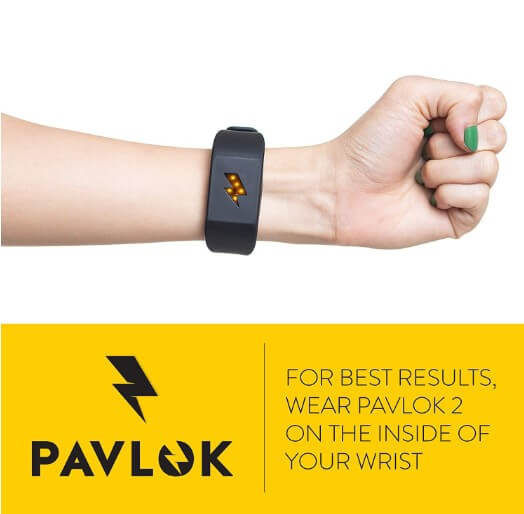 “I suffered from ADHD and felt addicted to Facebook. I wrote a blog post where I hired someone to slap me every time I log on to Facebook and my productivity skyrocketed, ”he said. 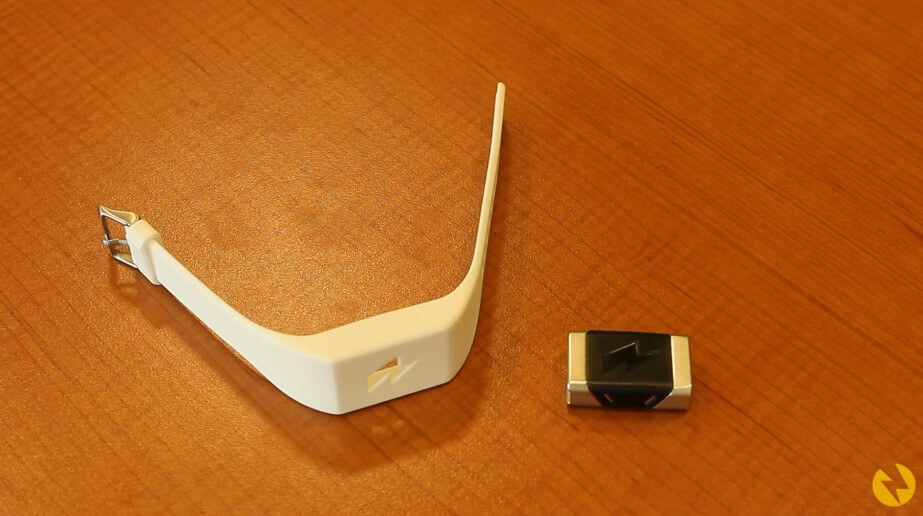 Although there are already many comments on the Internet by those who have been able to cope with bad habits, not everyone believes so much in the effectiveness of a bracelet.

Psychologist Greg Cason said: “These devices don't work. If they are not padlocked on people's wrists, people will take them off. ”

On the subject: 8 secret tricks to help save on shopping at Amazon

Reviews on the Amazon site were also mixed.

One client wrote: “Wristbands are a little uncomfortable, but they allow the contacts to be placed close to your skin for the best results. I used a button on the device to control the shock. ”

"At 100% charge, that's more than enough to get your attention."

“I'm glad I bought it, and for now I believe it works. In a few days you will not get rid of the problem for life, so you should stick to their plan and really work on it. "

5 secrets of profitable shopping on Amazon

8 secret tricks to help save on shopping at Amazon

Shock: It has become known that Amazon is doing with millions of unsold goods. VIDEO

Amazon will introduce cash in stores without cash registers and sellers: what went wrong