Home Israel 5 changes in favor of Israel, which Nikki Haley has achieved at the UN

5 changes in favor of Israel, which Nikki Haley has achieved at the UN

United States Permanent Representative to the UN Nikki Haley, who resigned on Tuesday, October 9, repeatedly spoke from the rostrum of this organization, defending the interests of Israel at the diplomatic level. During her tenure from January 2017, she worked closely with the Israeli delegation to the UN and visited the Jewish state. 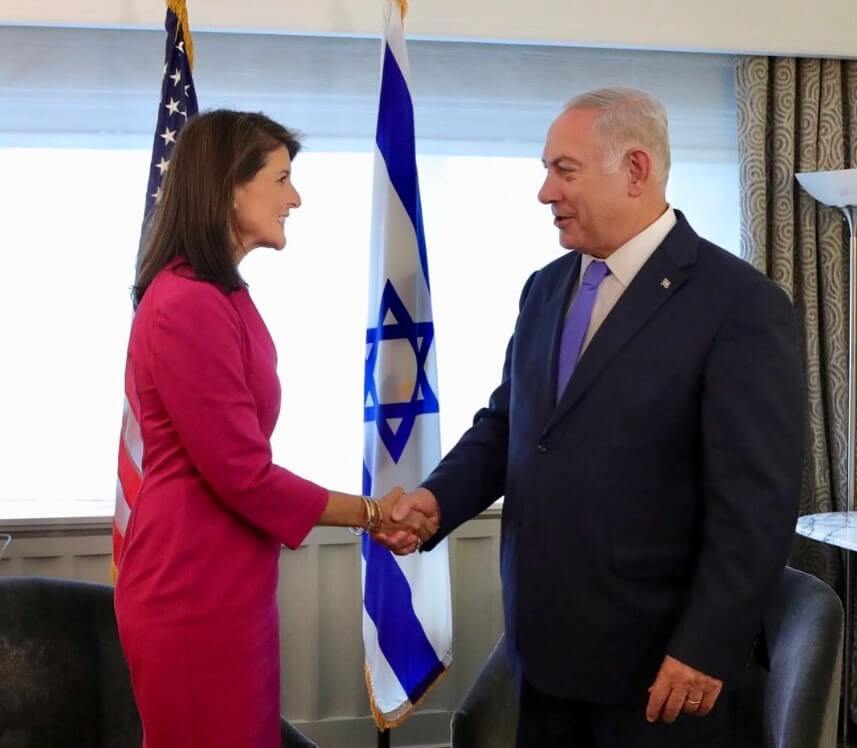 The head of the Israeli diplomatic mission to the UN, Dani Danone, commented on the decision of his American colleague: “Thank you, Nikki, thank you for always standing up for the truth fearlessly. Thank you for the support that you have always provided to the State of Israel, which ultimately led to a change in its status at the UN. Wherever you are, you will always remain a true friend of Israel ”, they quote Vesta Israel.

Here are just a few illustrative examples of how Hayley struggled with overtly anti-Israeli initiatives of various countries within the framework of the United Nations, implementing the US foreign policy to protect its strategic ally.

On September 28, 2018, during a meeting with Nikki Haley at UN Headquarters, Benjamin Netanyahu said: “You have purged the bad atmosphere here. On behalf of the people of Israel and all of Israel's friends in the world, I want to thank you for what you and Trump have done for UNESCO and UNRWA, for your fight against anti-Israeli resolutions and for your decision to condemn Hamas. ”

Here are five changes in favor of Israel that Nikki Haley made at the UN. 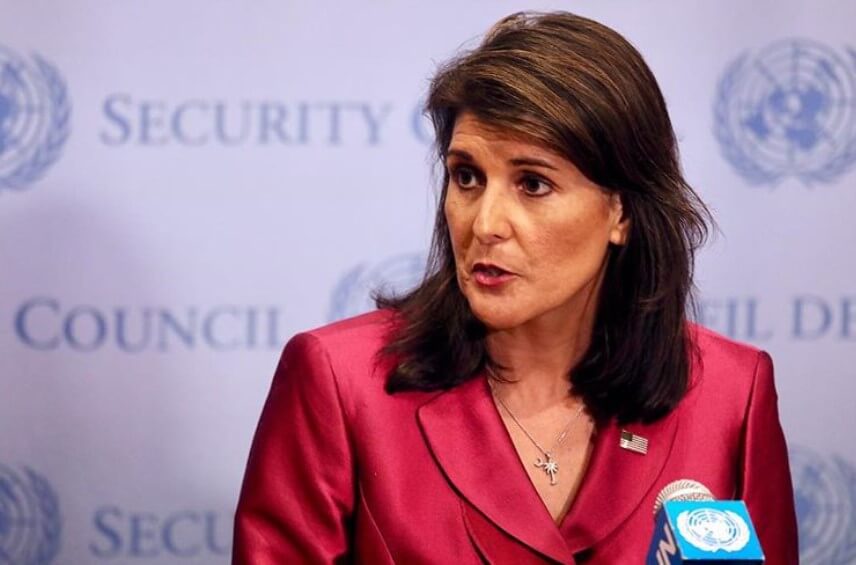 Shortly before that, Haley gave a speech in which she said: "Whoever shouts 'Death to America!' Does not even deserve a single dollar from the United States." She questioned the truth of the UNRWA data on Palestinian refugees, and also said that the issue of the return of refugees is not subject to discussion in the course of the Palestinian-Israeli settlement.

2. US withdrawal from the UN Human Rights Council

20 June 2018, the US Permanent Representative announced at a special press conference on the withdrawal of the United States from the UN Council on human rights.

Haley called the HRC "a cesspool of political bias" and recalled that Washington has repeatedly warned of this possibility, demanding an end to the constant and aggressive attacks on Israel. 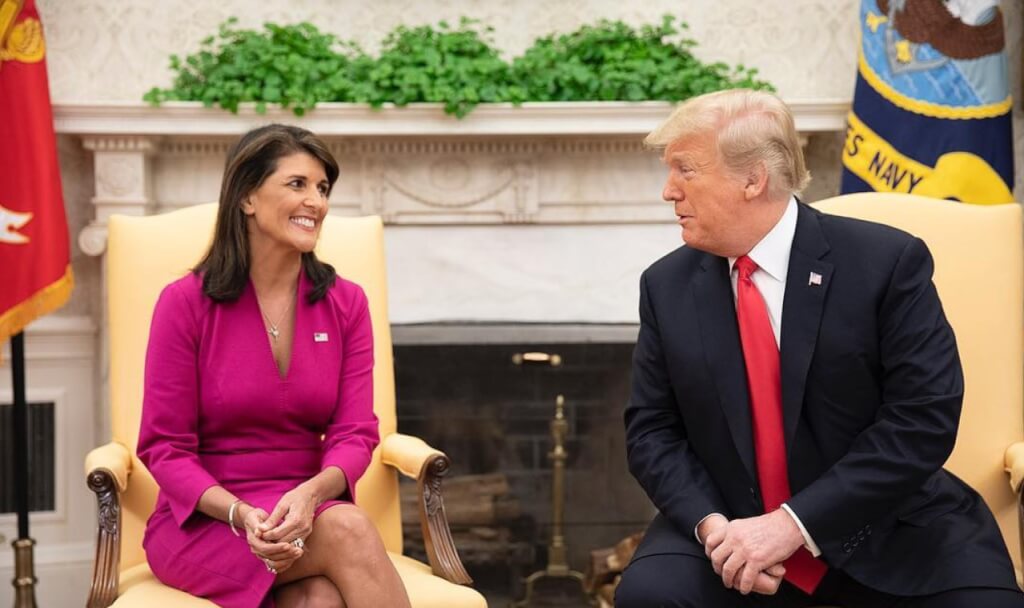 3. Using the veto against anti-israel resolutions

2 June 2018 The United States vetoed a draft Kuwaiti resolution condemning Israel for using force against Palestinians and calling for a mechanism of international protection. 10 from 15 members of the UN Security Council, including France and Russia, voted in support of this initiative. Only the United States was against it.

“For those who are able to recognize the reality in which Hamas terrorism is the main factor in the dire situation in Gaza, we are making an alternative proposal. This proposal places responsibility on Hamas, ”said US Ambassador Nikki Haley.

And the very first veto in its practice was the blocking of a UN Security Council resolution that prevented anyone from recognizing Jerusalem as the capital of Israel. 18 December 2017 for the first time in six years, the United States seized the right of veto. 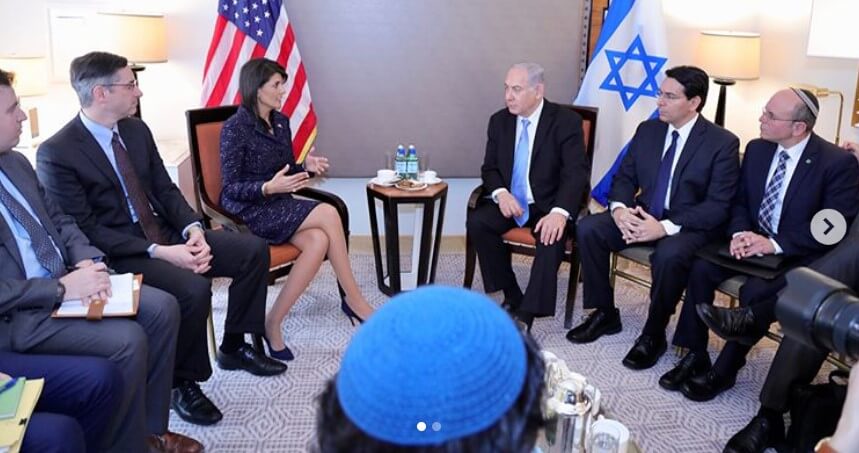 On September 21, 2018, the Russian representative to the UN said that Moscow considers the "pro-Israeli" steps of the United States in the Middle East settlement to be "counterproductive" and "undermining confidence." In response, Nikki Haley announced on FoxNews that she does not expect love and understanding from other countries.

15 May 2018 held an emergency meeting in the UN Security Council, initiated by Kuwait, in connection with the riots at the border with the Gaza Strip, during which 61 people were killed and about 12 000 were injured.

Speaking at the meeting, Nikki Haley blamed Hamas for what was happening: “Embassy transfer The United States is not damaging the peace process in any way. It should be remembered that the terrorist organization Hamas had destabilized the situation for many years, long before the decision was made to move the embassy. " 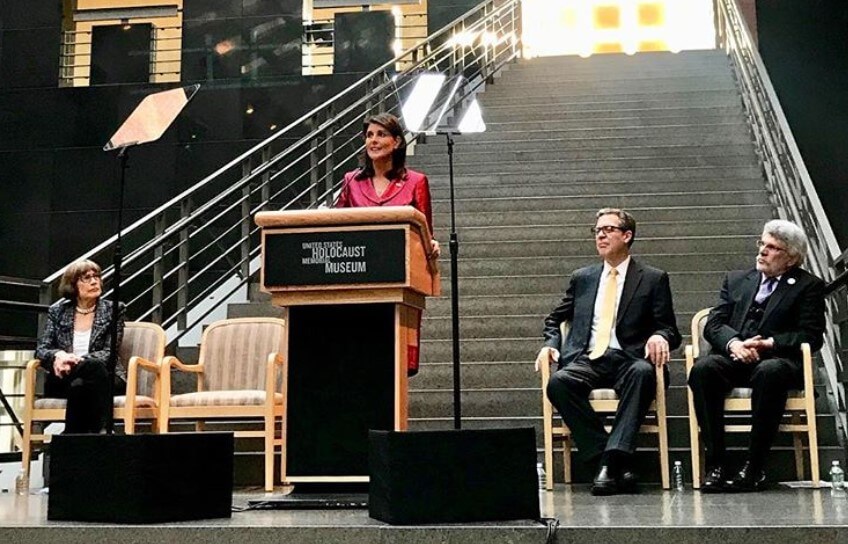 5. Countering the demonization of Israel and the movement in support of the boycott

On March 29, 2017, while discussing the activities of the BDS movement supporting the boycott of Israel, Haley said from the UN rostrum: “Know that the US is on the side of Israel. You have a friend and advocate at the UN who will help you. ” Her performance was greeted with thunderous applause.

And a day earlier, after just a few months as US ambassador to the UN, she delivered a powerful pro-Israel speech at the AIPAC convention: “The period of attacks on Israel is over. New times have come. ”

Yesterday there was a rumor in the media that the president Donald Trump may appoint his daughter as UN ambassadorby replacing retired Nikki Haley in this post. But, in his own words, Trump would not want to be accused of nepotism, he appointed permanent representative Ivanka.

“I think she would be incredible. I will be accused of nepotism, although I'm not sure if there is anyone in the world more competent than her. But that's okay. We are looking at a lot of people and it's interesting, ”Trump said.

The president said he is considering a close friend of his daughter's, former deputy national security adviser Dina Powell, as a candidate. “We actually have a lot of names,” he added.

Trump supported the actions of Israel in the Middle East

16 Proofs That Israel Has Something To Surprise You

What did Trump say at the UN General Assembly? VIDEO

In Brooklyn, the Russian-speaking supporter of Israel has become the female leader of the Democrats