Home World 12 most unusual New Year traditions around the world

12 most unusual New Year traditions around the world

Eating grapes, clothes with polka dots, or burning a stuffed animal - this may seem like a strange New Year's tradition for those who first hear about it, but for others it is a centuries-old custom. Fodor's travel. Here are 12 of the strangest and most unexpected traditions that residents of different countries of the world follow. 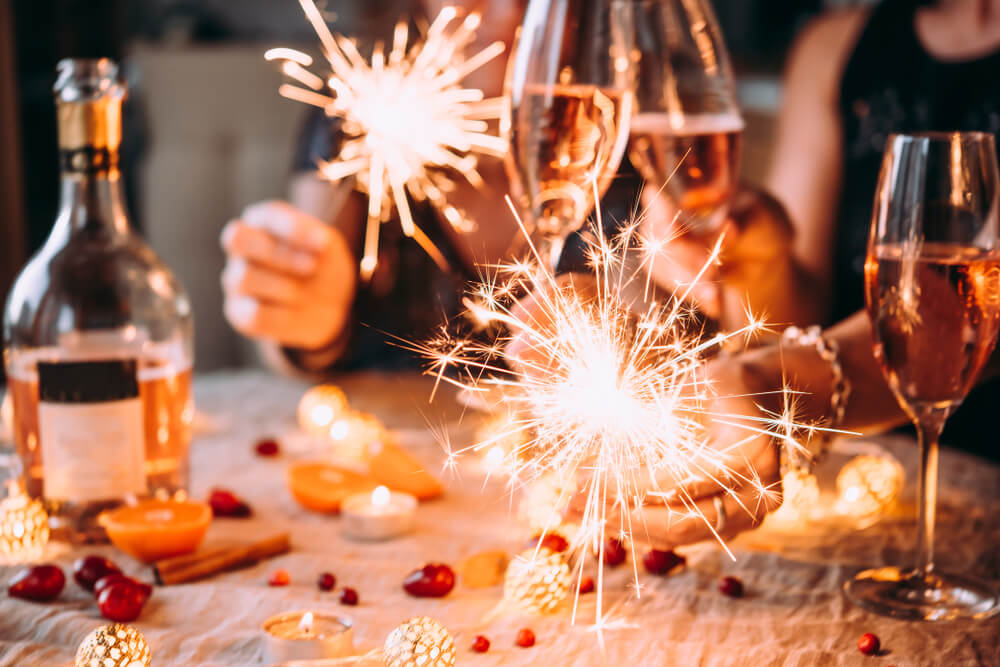 Some of the customs of New Year's Eve, such as a glass of champagne, fireworks and a countdown to the last few seconds of the year, seem universal, with many countries having their own unique ways of celebrating. Let's make a little “trip around the world” with these New Year traditions. Make a wish - and a happy New Year!

In Spain and some Latin American countries, one of the New Year's traditions is to eat 12 grapes, one for each month of the coming year, thus ensuring your prosperity. Sounds easy? Here's the problem: you need to eat one grape for each chime or bell strike at midnight. A favorite way of the Spaniards is to first take a bite and then swallow whole halves of grapes. A glass of sparkling drink can help this cause. The tradition dates back to 1909, when vine growers in Alicante came up with this idea to sell more grapes after an exceptional harvest.

In Latin American countries such as Mexico, Bolivia and Brazil, the color of your panties will determine what year you have, so choose carefully! Tradition says that red will bring love and romance, while yellow will lead to wealth and success. White means peace and harmony, and green means well-being and nature. In Turkey, red panties are also handed out as gifts of good luck and the promise of a fruitful new year.

On the subject: Olivier and the 'Irony of Fate': why Russian New Year traditions were not included in the UNESCO list

Who does not want to know what the next year can bring? Residents of Germany melt small pieces of lead in a spoon above a candle, and then pour liquid lead into cold water. The bizarre figures resulting from Bleigießen (lead casting) should show what the coming year will bring. If lead forms a ball, luck rolls along your path, the shape of the crown means wealth; the cross means death, and the star will bring happiness.

On Danish New Year's Eve, it is customary to throw plates and dishes at the front doors of friends and neighbors. It's kind of like a popularity contest, as the bigger the pile of broken china the next morning on your doorstep, the more friends and good luck you'll have next year. At a time when most people live in apartment buildings in cities, this tradition is dying, but it helps to have fun for those who still adhere to it. Another custom in Denmark is jumping from chairs at midnight, symbolizing a jump in the New Year, this must be done while the clock strikes 12 times.

In Ecuador, people create stuffed dolls that look like politicians, pop stars or other famous figures to light them on New Year's Eve. The burning of año viejo (old year) is intended to destroy everything bad in the past year and purify for the new. Scarecrows are made of old clothes, stuffed with newspaper or sawdust, a mask is put on top. The Ecuadorian tradition may have originated in Guayaquil in 1895, when an epidemic of yellow fever broke out in the city, and coffins stuffed with the clothes of the dead were burned for purification.

Round food and polka dot clothes

In the Philippines, the beginning of the new year is about money. Locals believe that surrounding yourself with round things (to represent coins) will bring money or luck. As a result, everyone puts on polka-dot clothes and eats round foods. To really nudge Fortune in your direction, coins should be kept in their pockets and linked constantly, assuming the money keeps flowing.

In Scottish folklore, the first step, also known as quaaltagh or qualtagh, is the first person to cross the doorstep of a house after midnight. It is believed that a tall, dark-haired man with gifts such as coins, coal, bread, salt and whiskey will bring good luck to the home. The tradition probably dates back to the days of the Vikings, when tall blond strangers (usually armed with axes and swords) at the door caused trouble, and in some places the "first step" of a blond man is still considered unlucky.

"Done with the old" is the motto in Naples, where people throw everything from toasters to refrigerators out of their balconies. Getting rid of old things symbolizes a new beginning of the year. To prevent serious injury, most locals throw small and soft objects, although travelers visiting Naples should still watch out for anything falling on their heads (this is also the practice in Johannesburg, South Africa).

On the subject: Without a Christmas tree, gifts and expectation of a miracle: how Americans celebrate New Year

Romania is a country with a rich tradition. On New Year's Eve, especially in the countryside, masquerade dances and death and rebirth ceremonies are held. The dancers dress up in furs and wooden masks depicting goats, horses or bears, and then dance from house to house to ward off evil spirits. The bear dance is the most popular. According to pre-Christian folklore, if a bear enters someone's home, it will bring prosperity, health and good luck.

Venice is a romantic destination at any time of the year, but on New Year's Eve in Piazza San Marco, tens of thousands of locals and tourists gather for fireworks, light shows (with falling light "hearts") and "kissing in Venice". The evening is dedicated to love and your loved ones, so celebrate with due attention and greet the new year with happiness in your heart.

The descent of potatoes

With fewer traditions, but with higher technology, the residents of Boise will celebrate the New Year for the fifth time by releasing giant potatoes from the sky. More than 40 spectators come to see the 000-pound (400-kilogram) GlowTato potatoes lit inside. Other places for a similar New Year's Eve tradition in the United States: Brasstown, North Carolina (possums run here), Bethlehem, Pennsylvania (180lb or 200kg marshmallow marshmallows) and Port Clinton, Ohio (giant fish named Wiley Wally )

At midnight, Buddhist temples across Japan ring their bells 108 times to dispel the 108 evil passions that all people have according to tradition. The Japanese believe that the ringing of the Joyanokane bells will cleanse them of the sins of the past year. Traditionally, 107 bells ring on the last day of the year, and 108 on the new year. Many people eat buckwheat noodles called toshikoshi soba on New Year's Eve to symbolize the desire for long life.

Olivier and the 'Irony of Fate': why Russian New Year traditions were not included in the UNESCO list

Without a Christmas tree, gifts and expectation of a miracle: how Americans celebrate New Year

Incredibly large numbers: why do many immigrants in the United States have a birthday on January 1